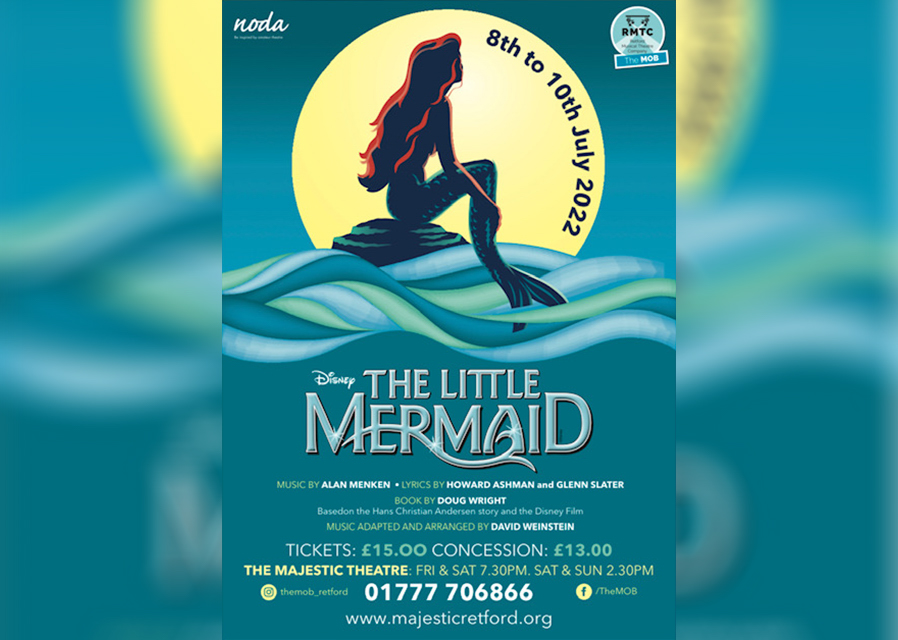 The MOB go under the sea

This July, Retford’s Majestic Theatre will be transformed into a magical kingdom beneath the sea when The MOB perform Disney’s The Little Mermaid musical on stage.

Based on the animated 1989 Disney film of the same name and the classic story by Hans Christian Andersen, the show tells the story of the beautiful young mermaid, Ariel who dreams of the world above the sea and gives up her voice to find true love.

All the well-loved characters will take to the stage; Flounder, Sebastian, Scuttle, Ursula, King Triton as well as Ariel’s true love Prince Eric, and together with a live orchestra, colourful staging, and favourite songs such Part of your World, Kiss the Girl and Under the Sea, The Little Mermaid promises to captivate its audience.

As the junior section of the Retford Musical Theatre Company, The MOB is a group of talented local youngsters aged eight to 18 years old and they will by performing four shows, from Friday 8th to Sunday 10th July.

Working incredibly hard since the beginning of the year, the children have participated in rehearsals to not only learn their words, songs, and dance routines, but they have also been developing their stage and musical direction.

The children also took some time out of rehearsal to support the local Ukrainian appeal by collecting donations of clothing and essential items as well as senior MOB members performing a collection of songs at The Well’s Ukraine Fundraiser evening, helping to raise almost £3,000 for this worthy cause.

The Little Mermaid tickets are available to purchase from the theatre box office, either in person, by telephone 01777 706866 or online via their website www.majesticretford.org. Show times are 7.30pm on Friday and Saturday with matinee shows starting at 2.30pm on Saturday and Sunday. Tickets are priced at £15.00, with concession at £13.00.

Adults and children alike will revel in the aquatic adventure that will come to life on stage. From the principle cast to the ensemble, all have perfected the portrayal of the iconic characters. With impressive vocals, remarkable dance ability and great story telling, you will not be disappointed.

Support your local youngsters and buy your tickets nice and early.