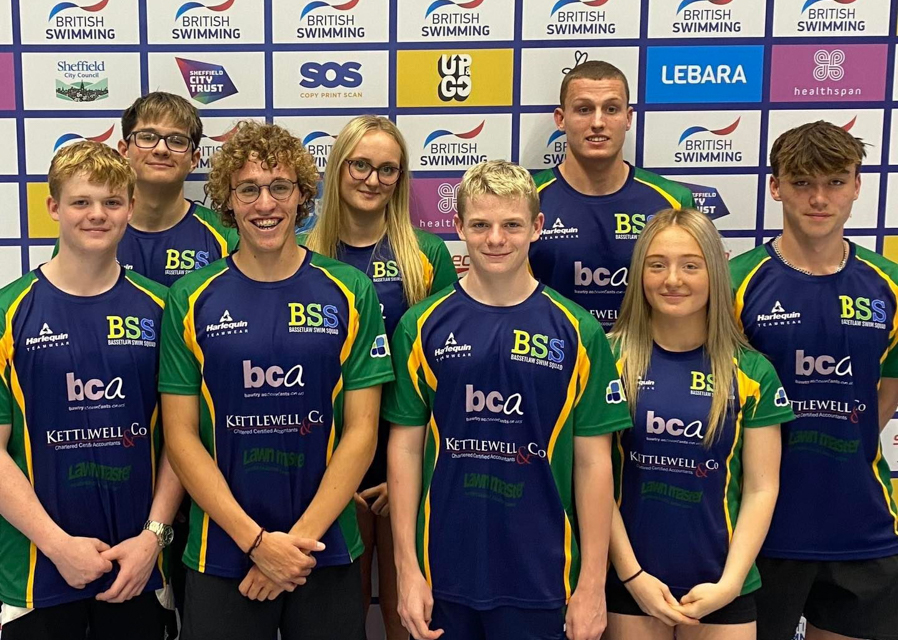 Over 1,600 athletes from all over the country descending on Ponds Forge International Sports Centre on 22nd to 28th July to compete at the British Summer Championships.

Bassetlaw Swim Squad had a record number of representatives at this level of competition, all of whom had never competed at this standard. They had eight swimmers competing across 23 events, contesting five finals and winning the squad’s first ever able-bodied medal with Lewis Warner earning a Silver on the men’s 17years 50m Backstroke event. Collectively, the team saw 10 individual PBs broken and the team relay set a new team best time.

Warner, from Retford Swimming Club and Toot Hill School, also qualified for the 100m and 200m Backstroke events, achieving new lifetime best performances in both, narrowly missing the podium on the 100m distance.

Along with teammates Harry Benzies, Callum Kettlewell and Cillian McGuinness, Warner completed the line-up for Team BSS’s first ever national relay team. This is the first time the team has had strength in depth to finish 18th in GB and the third team from the Midlands region, with only 3.7 seconds separating the top three. They managed a huge 10 second PB as a collective.
Boys team captain Callum Kettlewell, of New College and Retford Swimming Club, set a new personal best in the 1500m Freestyle and agonisingly missed the final of the 200m Butterfly event by 0.3 seconds. Girls team captain Amelia Stevenson, of Tuxford Academy and Retford Swimming Club, similarly had a narrow miss just 0.8 seconds off the final of the 200m Backstroke.

Rachel Webb, of William Farr and Retford Swimming Club had a very busy week interrupted with a bout of illness. Nonetheless she competed valiantly with her 6th place finish in the 200m Backstroke the highlight of her week.
And Joe Seage competed in the S14 category of the multi-classification events 100m Breaststroke and 200m Individual medley, progressing to the final in both events getting close to his season’s bests.

Head of Performance Swimming, Michael Glossop, comments: “These results just highlight the journey that we’ve been on for the past five years. These swimmers are all debutants at this level of competition and have learned so much about themselves and how to manage themselves on a big stage. Getting a medal and getting a relay team qualified are glass-ceiling moments for Team BSS.“