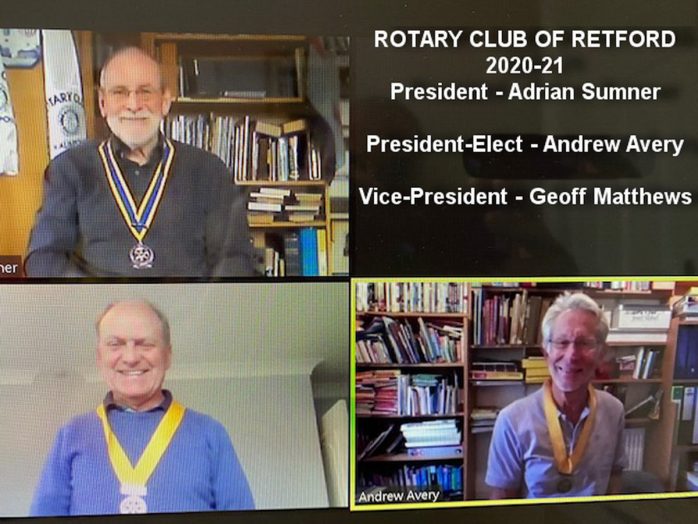 Normally, July marks the start of a new Rotary year, a new team led by a new president. This year was slightly different, as reported earlier in Retford Life. Rotarian Adrian Sumner stepped into the role a little earlier. However, he is now joined by President Elect Andrew Avery and Vice President Geoffrey Matthews. In that order, these will be Adrian’s successors into the presidential role in future years. Meanwhile, the club bade farewell to Past President Derek Broughton. Derek, and his wife Joan, have moved to Wiltshire for domestic reasons. Mary Saddington has kindly replaced Derek as chairman of the Community Service Committee. Mike Davis agreed to stay on as treasurer allowing Mary to fulfil her new role instead of being his replacement. Marjorie Crookes continues in her role as secretary.
With Zoom technology, the administration of the club is able to continue. Zoom is also used for club meetings every fortnight. The first meeting of the month was a talk by Dr Ginny Avery (Andrew Avery’s daughter). She is a clinical psychologist working in Tyneside and reflected on how the pandemic has affected her work.
The other meeting in July was a business meeting. Reports were received from the various committee chairmen and included news that a further £250 had gone to Women’s Refuge, £250 to vulnerable young people in Bassetlaw and the Percy Laws Memorial Management Committee donated £290 to the Muddy Fork charity to help insulate their building at their site on the Idle Valley Nature Reserve.
Planning was well advanced for members to go litter picking during August.