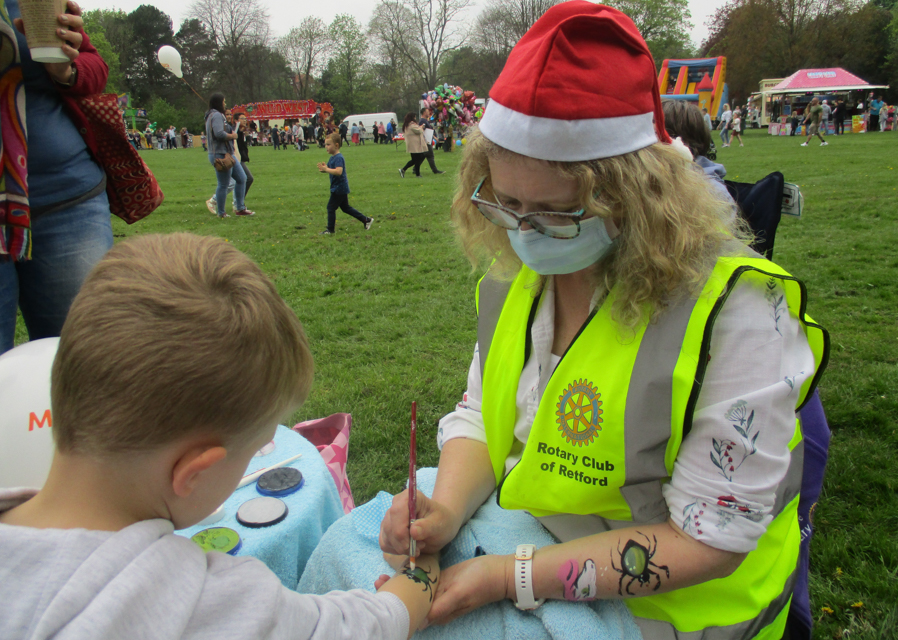 Charter Day in Retford is always a great occasion. The Rotary Club had its stall organised by Rotarian Kate First on Kings Park, with games for the children and very popular face painting by Rotarian Linda Crossland.

The following Friday, the International Committee had a stall in the market selling bric-a-brac in aid of their Bread Fund for South Africa. Both events contributed to various charity accounts. Meanwhile, Past President Linda Cadman collected unwanted but serviceable shoes for the charity ShoeAid.

The Club has been looking at new ways of raising valuable funds for the Charity Account to make up for the Covid-affected Swimathon and Charity Ball. The first of these was a concert by the Doncaster Youth Swing Orchestra on 14th May at The Well Baptist Church, Hospital Road. £922 was raised, which should top £1,000 when Gift Aid is added.

The bank holidays in May restrict the number and variety of meetings, but on 16th May new Rotarian Dawn Cragg gave her ‘Job Talk’. What an active, varied and fruitful life she has had, very much justifying her being awarded her MBE.

The golfing members had their first trip away this year to Ullesthorpe in Leicestershire from 24th to 27th May. Organised by Past President Jack Anderson and Rotarian John Foreman, the star of the show was actually Jack, winning all three events played.

Aquabox is an important charity providing clean water worldwide in times of disaster. This Rotary charity is based in the East Midlands, and on 29th May Past President Linda Cadman organised a sponsored walk at the Wetlands Waterfowl Reserve, Lound as part of a national event to raise funds for the charity.

Sadly, other Rotary Clubs are not as successful as Retford. The Rotary Club of Worksop Dukeries (one of two clubs in the town) has wound up. On 30th May, President Andrew welcomed Fran Walker from that club who has chosen to transfer to the Retford Club.