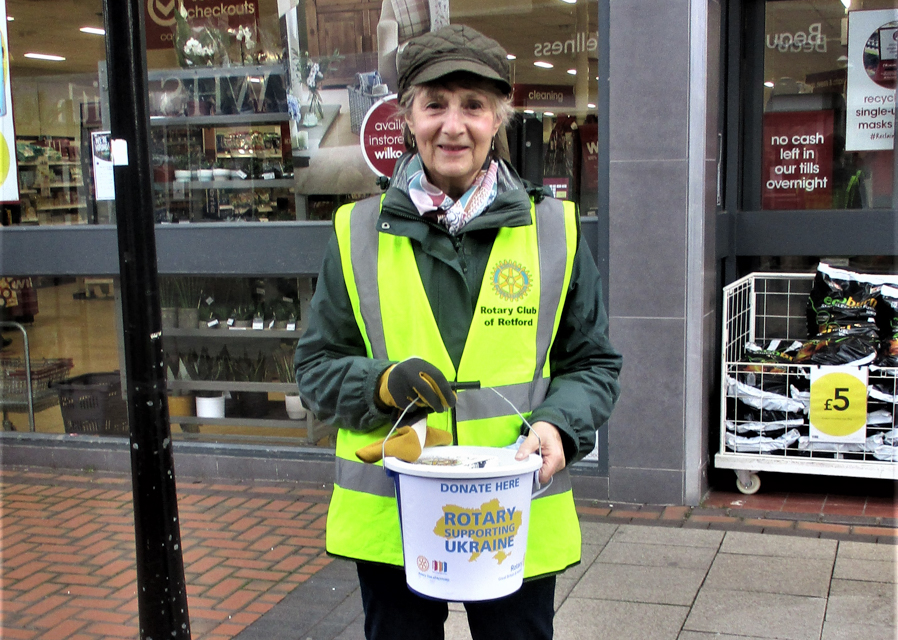 One thing has totally dominated the month of March: the atrocities, wanton destruction and humanitarian crisis in Ukraine. Bassetlaw District Council rapidly authorised the Rotary Club to hold a Street Collection on Saturday 12th March. £1,937.35 was collected and sent to the Disasters Emergency Committee. It is hoped a further £490 will be added from Gift Aid. So, well done the people of Retford.

Meanwhile, Treasurer Mike Davis has been in contact with Borys Bodnar, President of the Unity Rotary Club of Lviv, and £5,000 has been sent to them to purchase supplies as necessary. This amount included £1,500 from the Charity Account, £1,500 from the Percy Laws Fund, Inner Wheel, Rotary members own donations and the sale of Rotarian David Cartwright’s honey.
In addition to this, £1,000 has been set aside for the Slovakian Paralympian authorities to assist Retford Rotarian Jaime Hitchcock in his endeavours to rescue Ukrainian Paralympic Table Tennis Players from their war-torn country.

The other big news was the induction of no less than three new members into the Club: Dawn Cragg MBE, Robert Claridge and Liz Prime. Many readers will know Dawn from her micropigmentation business in Bridgegate. Robert Claridge is Dawn’s Business Manager. Liz has recently retired from environmental health management. This brings the total membership to 67, though it hasn’t felt like that recently with Covid devastating the numbers attending meetings.

President Andrew Avery and Rotarians Bob Eden, David Towers, Alec Tasker and Adrian Sumner helped to load a container bound for Zanzibar, organised by the National Police Aid Convoys (NPAC) at their warehouse near Clipstone. This was following a request by Alec’s wife Marion. Inner Wheel Club of Retford member Marion Tasker is also now the NPAC Chair.
A whole variety of items were packed including rolls of fabric and sewing machines, which are for a new Pad Project in Zanzibar being organised by Marion during her three weeks in Africa next month. This project will make re-usable sanitary pads allowing native Africans freedom during the time every month when they were previously very inhibited.

Because of Covid, the Rotary Club has been struggling to hold major fundraising events in which the public can participate; no Autumn Ball and no 2022 Swimathon.
Members have drawn up plans for events where members of the public can have fun and, at the same time, help raise funds for others in greater need. Hopefully they can echo the success of the Ukraine collection.
On Saturday 14th May, the Doncaster Youth Swing Orchestra will be in concert at the Well, Hospital Road.
Later in the year, a Golf Charity Day at Retford Golf Club is being planned for Wednesday 17th August.
Lastly, a long way ahead in December, there will be Retford’s first ever Family Santa Fun Run. This will be on Sunday 11th December.

Further details of all these events can be found on Facebook or at www.rotaryclubofretford.co.uk.