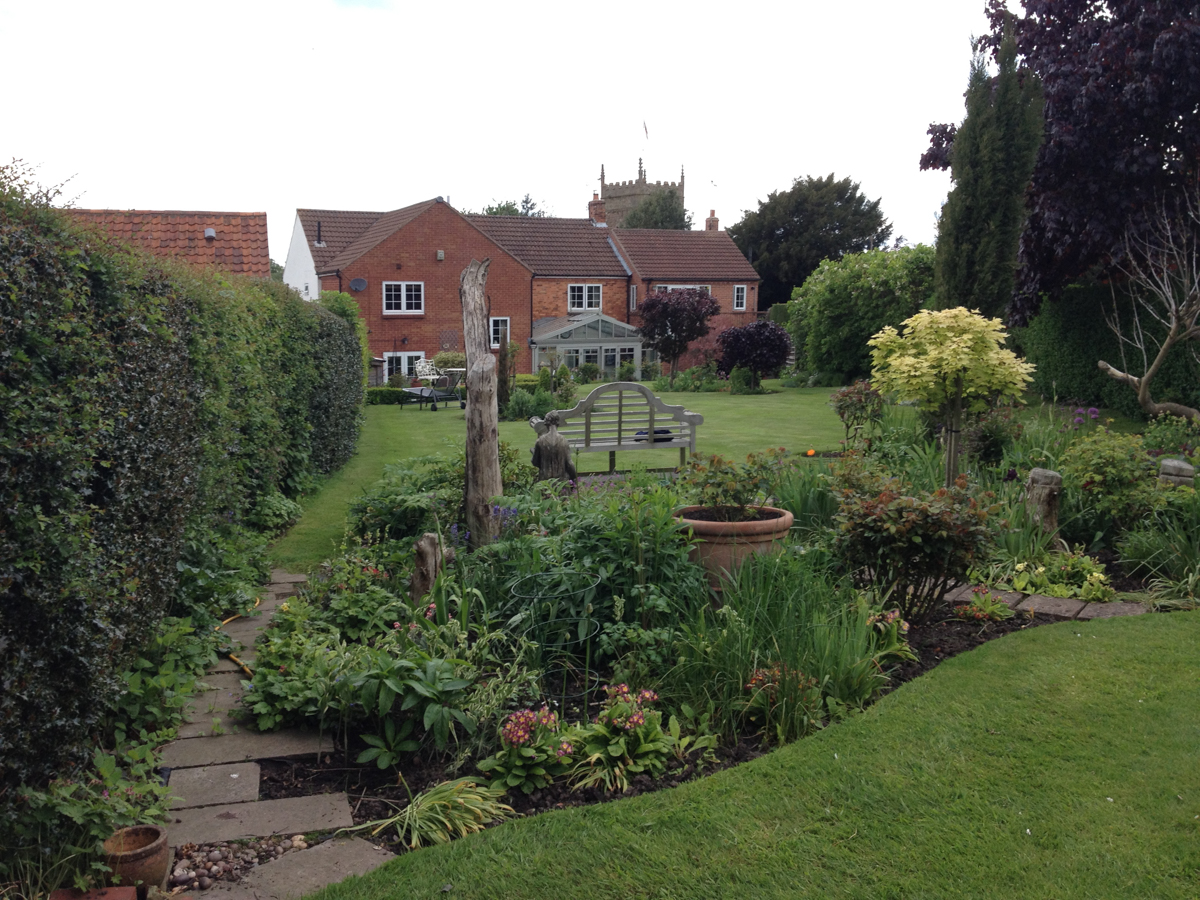 On Sunday 7th July from 10.00am to 5.00pm, several private gardens on Potter Lane, Wellow, are opening in support of the National Garden Scheme and the nursing charities that it supports. Wellow, formerly Wellah or Welley, from the number of wells, has a green and a famous maypole. Not so well known is the Wellow Dyke, which surrounds the village and can still be seen in some places. Here is a bit about each of the gardens that are opening and how they have developed.

PARK HOUSE GARDEN
In addition to the gardens shown in the NGS county booklet and website, there is also Pam and Graham Axworthy’s Park House Garden which has evolved over 30 years from what was originally. These were three separate plots that serviced the cottages at 1, 2 and 3 Potter Lane. A large vegetable garden has been re-planted and now combines flower beds and raised vegetable plots. The row of conifers that separated the top and bottom gardens had been removed to allow views of the whole garden and St Swithin’s Church.

ANNE AND FRED ALLSOP’S GARDEN AT 4 POTTER LANE
“30 years ago we walked around a field that housed four horses and bought the house that went with it. The first year was a mass of clearing out scrub and meadow. It was a good year for mushrooms! Each year we added a new bed until we had a garden we liked. It is now set out as four gardens, each with their own interest, including a small walled area at the side of the house, so there is something for everyone no matter how small their garden is. The perfume from the honeysuckle and roses is heady of an evening and the four seating areas each have their own distinctive view.”

MAYFIELD
Brenda and Les Acutt moved into Mayfield only a few years ago but have transformed the mature garden that they inherited into an eclectic garden that is both family and wildlife friendly. The wide variety of plants is a smorgasbord of pollen for insects and bees. There are also interesting tropical plants that remind them of their past life and that have survived well in the Nottinghamshire climate.

TITHE BARN
Carrie and Andrew Young’s garden at Tithe Barn was cow pasture until late last century, when the barn was converted. It has evolved in stages to what it is now. Disasters include when the bitter frost of 2010/11, at -18°c, burnt a line of 50-plus topiary conifers on the drive such that they didn’t recover. Replacing these with mostly self-set yew trees in 2012 was a major undertaking and the growth to date shows yews are not as slow growing as they are reputed to be. The approach to this garden between the new yew hedges sets the tone to the wide sweeps of lawn and generous terrace. There are herbaceous beds, roses and rambling roses, shrubs and weeping and specimen trees.
Each garden has a different style and together they show a range of planting and design ideas that can inspire gardeners for their own plots. In addition, on the day there will be plants for sale by Piecemeal Plants, homemade cakes and teas in the village hall, the Southwell U3A recorder group will play in the afternoon and there are artists including: