Thanks to the passion and loyalty of everyone involved with the Lincs and Notts Air Ambulance — from staff, fundraisers, volunteers and of course the aircrew and clinical team — the charity is now celebrating its 25th year in service. 2019 is shaping up to be a big year for the Lincs and Notts Air Ambulance, as the charity marks its 25th anniversary in May.

This remarkable charity has come a very long way since its humble beginnings in 1994, when the charity operated out of a portacabin and could only fly when they had raised the money to do so. Since then, the tremendous support from the local community has ensured the helicopter remains on call and available 365 days a year.

Karen Jobling, Chief Executive at Lincs and Notts Air Ambulance, reflects on the last 25 years. She said: “Since our Charity began 25 years ago, we have been called upon to respond to over 19,800 missions, delivering specialist medical attention to the people of Lincolnshire and Nottinghamshire during their greatest hour of need. 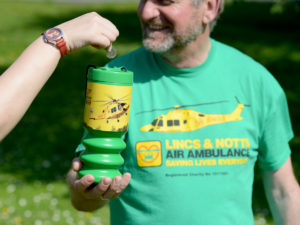 “Our Ambucopter watches over two counties, some 3,500 square miles, therefore it’s crucial to have an Air Ambulance which is able to get to the scene of an accident or respond to a medical emergency within minutes of taking off. Travelling at speeds of up to 200mph, our skilled team of pilots, doctors and paramedics bring the equivalent of a hospital A&E department to the scene of an incident and can transport a patient to a specialist unit or major hospital in a fraction of the time taken by a road ambulance.

“Fundraising is our life-blood. We receive no direct Government funding and rely solely on the support of the communities we serve to raise the funds we need to keep our helicopter flying. Every year we respond to an average of 1,000 potentially life-saving missions, each costing approximately £2,500.

“Our 25th anniversary is not only a huge milestone in the history of the Lincs and Notts Air Ambulance, but it also gives us a chance to look back on how we have been able to make a positive impact on the lives of many thousands of people over the years.

The shop, which is located on Exchange Street, is one of 10 charity shops across Lincolnshire and Nottinghamshire which help to raise vital funds needed to save many more lives across the two counties.

The transformation includes a touch of redecorating and re-organising of displays, which has helped the shop to achieve a beautiful vintage look. The store now has a large area for men’s clothing, footwear and accessories, a vinyl record shelf and a wide selection of books.

If you’d like to find out more about the life-saving work of the Lincs and Notts Air Ambulance, visit www.ambucopter.org.uk.