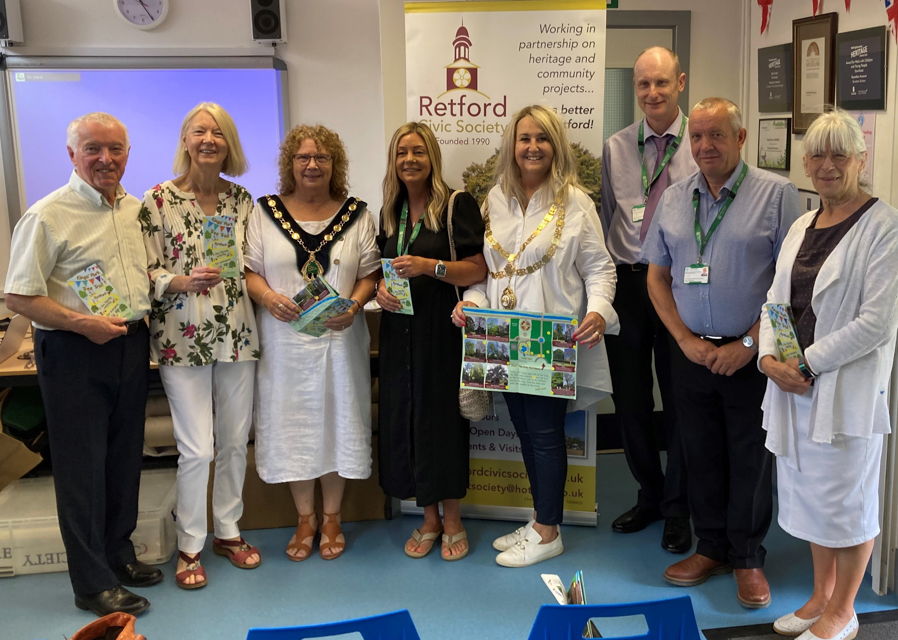 The launch of the new Retford Kings’ Park Tree Trail was held at Bassetlaw Museum on Monday 25th July. The Chairman of Bassetlaw District Council, Councillor Madelaine Richardson, the Mayor of Retford, Councillor Sue Shaw, representatives of the Parks Department Management Team and members of Retford Civic Society, heard about how the Queen’s Platinum Jubilee inspired the new activity guide.

Everyone was surprised at the beauty and variety of the 20 featured trees and couldn’t wait to go and explore the park to find them.

Chairman of Retford Civic Society, Derek Turner, thanked those responsible for producing the trail, Joan Turner and Lesley Sumner, the Parks Department for their advice and expertise and Bassetlaw District Council for their support.

He said: “When Kings’ Park was opened in 1938 there were no trees at all on the land that was donated by the Huntsman family from West Retford Hall. On the day, Councillor Eric Spencer had planted two Variegated Sycamores beside the entrance gates on Chancery Lane and a Walnut tree nearby. He had said, ‘This is your park – take it, use it and treasure it! I hope that in its gardens you will find peace and beauty, that its tennis courts and bowling green will produce good sportsmen and that the children’s playground will produce fit and happy children.’

“The Tree Trail is an extension of this provision in our fine Kings’ Park. It will help us all appreciate what we have today as well as how it came about”.

The leaflet is now freely available at the Denman Library, Bassetlaw Museum in Grove Street, The Hub on Cannon Square as well as from the Kiosk in the park.