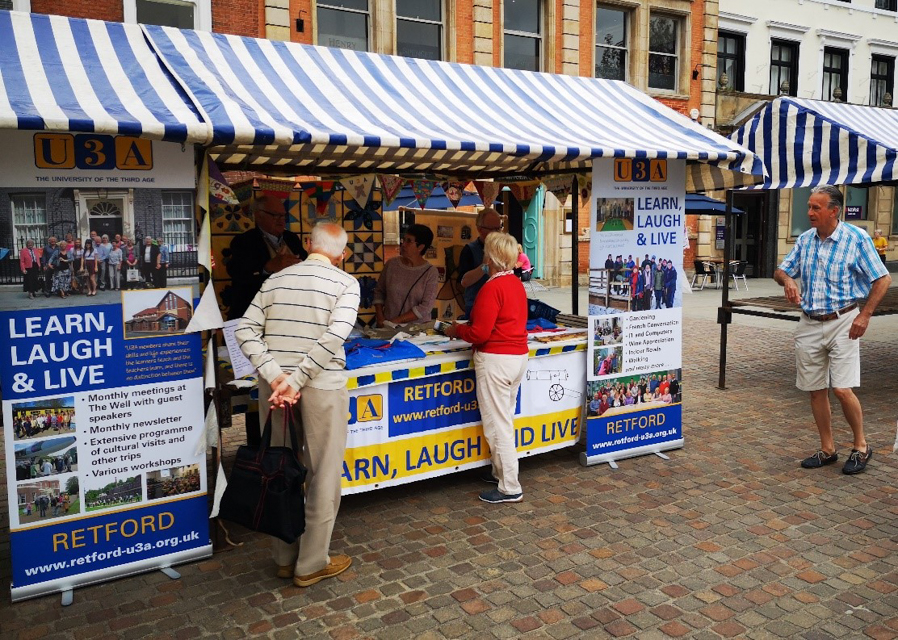 A massive thank you to everyone who supported Retford U3A’s National U3A Day event held in Retford Market Square on Thursday 3rd June.
Thanks to Lynden Maddison from Bassetlaw District Council for allowing the group to have one of his market stalls. Bryan Gladstone also needs a special mention as he was the ‘stall manager’ all day.
Brenda Wilson arranged a rota of committee members and interest group leaders to be on the stall and over the five-and-a-half hours they had 18 members of the public visit them, who either wanted to join as a new member, or to rejoin as a lapsed member. They may even have found a community minister, who is available to become their Retford U3A Chaplin.
It was a real effort and, combined with a series of emails to lapsed members, they are hoping to attract back around 25 new or renewed members.
Retford U3A are hoping to enjoy face-to-face meetings from September, but if things change they will continue using Zoom until they can meet once again. They are also awaiting a review of restrictions placed on groups meeting at the council’s community centres.
Over the last year, following every monthly committee meeting an email has been sent to the membership with brief details of what was discussed. Although the group are all fairly optimistic about the future, they do have management issues over next year’s committee. Several of the members have completed their three year periods of service. They will need a trustee to liaise with their friends at the North Notts U3A Group, as well as a secretary and a group coordinator. If you are interested in any of these three positions they would love to hear from you and support would be given.
To find out more about the roles, or just for more information about Retford U3A call their membership secretary, Sue Paul, on 01777 705008, or have a look at their website.