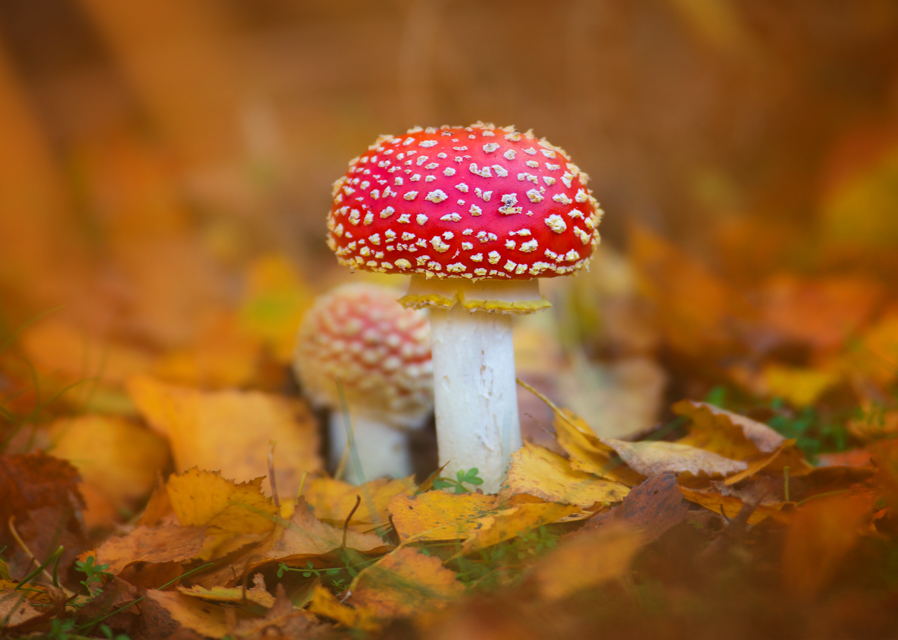 Whilst there are many, many types of flowering plant here in the UK, there are up to eight times as many species of fungi – with approaching 15,000 different types – and around five times that many world-wide.

Fungi are usually thought to be plants, but actually occupy a classification of their own. Whilst abundant, most fungi are small and inconspicuous – thriving amongst dead matter in soils as well as on plants and trees. Some species only come to our attention when they ‘fruit’ either in the form of mushrooms or moulds. The best time to see a wide range of types is autumn and early winter when many and wondrous fruiting bodies become apparent in our woodlands and open fields as well as along hedgerows and closer to home in parks and gardens.

The terms ‘mushroom’ and ‘toadstool’ are familiar to most people and are usually used to describe fruiting bodies which have the characteristic form of a stem topped with a cap which carries gills underneath. These gills produce microscopic spores which will give rise to the next generation of fungus as they spread below the surface. Whilst the term ‘mushroom’ is commonly used to refer to edible varieties and ‘toadstool’ more likely to be applied to poisonous ones; the names are actually completely interchangeable and certainly shouldn’t be used to determine whether fungi are edible. Some species are dangerously poisonous, so none should be eaten unless you are absolutely sure of the identifying features or have confirmation from an expert.

The classic red ‘toadstool’ topped with bright white spots made famous in fairy tales is the fly agaric (Amanita muscaria). It favours light soils and is often found growing amongst trees such as silver birch or a number of conifer species and is native throughout much of the northern hemisphere. As a toxic species it should clearly not be eaten and preferably not even touched. Despite its classic look, nature has a trick up its sleeve which means that some people do actually mistakenly fall foul of this species. In a quirk of nature rain can actually wash away the tell-tale white spots, leaving this most recognisable species looking very much like a harmless edible species – so it’s always worth double checking exactly what variety you are dealing with.

Another common type of fungi are bracket fungi which, as their name implies, look like ‘brackets’ on the trunks and branches of trees. The ‘chicken-o-the-woods’ (Laetiporus sulphurous) is an easy-to-spot bracket fungus due to its distinctive sulphur-yellow colour. The yellowy orange ‘brackets’ are fan-shaped with a rippled edge. The upper surface is smooth and velvet like in yellowy orange and the underside is covered in spores.

As well as providing colour and interest in the countryside in autumn, fungi play a hugely important role in our ecosystems, helping to breakdown and recycle nutrients from dead and decaying organic matter whilst also providing food and shelter for different animals. Try leaving log piles and dead wood to help fungi and the wildlife that depends on it. To find out more about encouraging wildlife into your garden, visit the Wildlife Trusts’ Wild About Gardens website www.wildaboutgardens.org.uk, a joint initiative with the RHS.

After a challenging 18 months we’re delighted that our events programme is back up and running with a variety of activities added recently including local wildlife talks, a bat walk and the resumption of our hugely popular celebrity lecture series.
Our recent rearranged event featuring Chris Packham was a sell-out and we’re delighted to be welcoming back one of Nottingham’s own in October. An Evening with Lucy Worsley on Friday 15th October at Nottingham’s Albert Hall will generate much needed funds for our conservation work.
Details of all our events can be found at www.nottinghamshirewildlife.org/events.