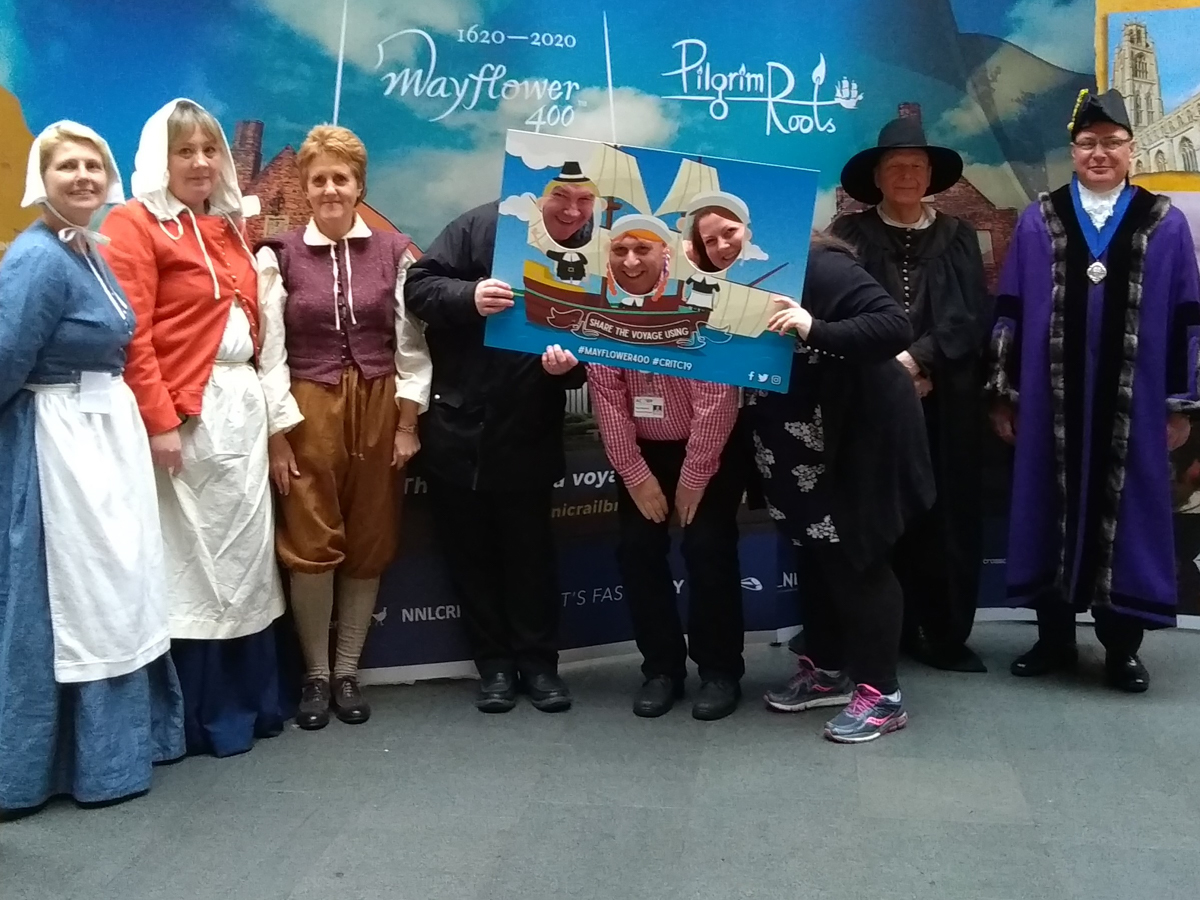 A team from North Nottinghamshire “let the train take the strain” on a trip to London to promote Retford and the surrounding area. Councillor Garry Clarkson, Retford’s Deputy Mayor, joined the team from North Notts and Lincs Community Rail Partnership (NNLCRP), the Poacher Line, and the Association of Community Rail Partnerships (ACoRP) at an event in Kings Cross Station in London, on Friday 17th May. Dressed in his mayoral robes, Councillor Clarkson was a very popular subject for photographs with many of the visitors.

Throughout the day, the team handled a constant stream of enquiries about the Mayflower Pilgrims, and the areas being promoted — even a conversation about commuting from Retford to London. Through leaflets designed for the event, Retford Business Forum highlighted the many exciting events planned for the rest of 2019, including Summer on the Square, Heritage Day and Pilgrims Festival; Bassetlaw District Council provided information on Pilgrim Roots and the Mayflower Trail.

A range of leaflets, promoting Mayflower 400, Retford, Gainsborough, Lincoln, Boston and Skegness, were handed out to passengers and visitors by the teams from 5.00am to 6.00pm. The focus of the display was the Mayflower 400 story and was part of a promotion with other community rail partnerships from Essex, Southampton, Devon and Cornwall which had also held Mayflower 400 events at a range of London mainline railway stations on Wednesday 15th May.
The groups took part in ‘Community Rail in the City’, a flagship annual celebration, now in its ninth year, aimed at developing tourism and travel for recreation on Britain’s community rail routes, encouraging thousands of people to explore epic landscapes, coastal scenes, and sites of historic interest.

This year’s event saw 36 community rail partnerships and tourism partners — up from 24 groups last year — hosting activities at 20 mainline railway stations, including those in London, Birmingham, Manchester and Glasgow.
Groups spoke to an estimated 75,000 people across the event, giving out information promoting the tourism opportunities accessible via Britain’s expanding community rail network.

Rick Brand, Vice Chair of NNLCRP, and Chair of the Bassetlaw Area Group, said: “Community Rail in the City is a great opportunity to promote our railway lines to thousands of commuters and potential visitors. We highlight the fantastic things there are to see and explore and encourage people to visit by rail. As well as being a more relaxing and pleasurable way to travel, visiting the area by rail benefits the local economy, and means less traffic, noise and pollution in our communities.”

Community rail partnerships work at grassroots level to engage local communities, help people to get the most from their railways, and promote rail as a key part of sustainable, healthy travel.

The event was organised by ACoRP, the umbrella body for community rail groups across Britain, which supports its members to work with partners to integrate rail travel into their area’s local tourism offer.