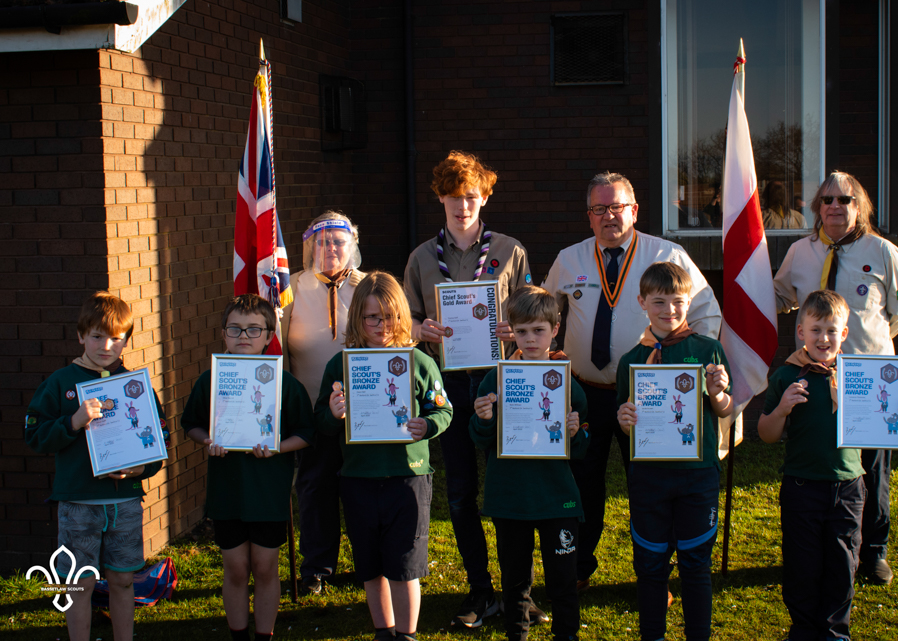 7th Retford Scout Group managed a fun-filled month in April, starting off with a barbecue for both age groups with burgers, sausages, bread twists and marshmallows. The following week, they all made water rockets and had lots of fun firing them and getting wet.
In April, they traditionally remember St George who is the patron saint of Scouting and England. The Scouts talked a little bit about St George and then perfected their navigating skills to get back to their Scout HQ from Ordsall.
On Thursday 22nd April they had lots of badges and certificates presented to six boys who are now in Cubs but had gained their Chief Scout Bronze Award during their time in Beavers. Two girls, who are now in Scouts, were presented with their Chief Scout Silver Awards. Tom, one of the Explorer Scouts and Young Leader with the group, had finished his Chief Scout Gold Award last summer. Jock Shaw, who is part of the Nottinghamshire Scouts County Team, came up to present the awards at the first available opportunity. After the presentation, the Cubs went up to the woods and made some dragon pictures from natural objects, eg leaves, twigs, grass.
The final week of April saw the Scouts working in their new patrols to answer a quiz in Retford Town Centre. The Cubs continued with their Naturalist badge and some have now completed all the tasks, whereas some of their newer members have got more to do yet. It has to be done over a number of visits and different seasons.
They have enjoyed meeting all their new members and reconnecting with all their previous members. Several have moved up to a new section. Currently their Cub section (7.5 years old to 10.5 years old) is full but you can still ask to be put on a waiting list. Scouts do have space (10 to 14.5 years old) and currently have young people from 12 different schools. Beavers (5¾ to 8.5 years old) are planning a restart date. Their linked Explorer Scout Unit (14 to 17 year olds), Cannon Choughs ESU, are hoping to restart their own sessions soon, however some of their members have continued to help in their role of a Young Leader with the Cubs and Scouts.
If there is anyone else who wishes to join in the adventure at 7th Retford, please contact them via 7thretford@gmail.com or 01777 704835 (when prompted say “Scout Group”). Alternatively, contact Nottinghamshire County Scouts office for details of your local groups on 0115 952 3617 or via www.notts-scouts.org.uk.