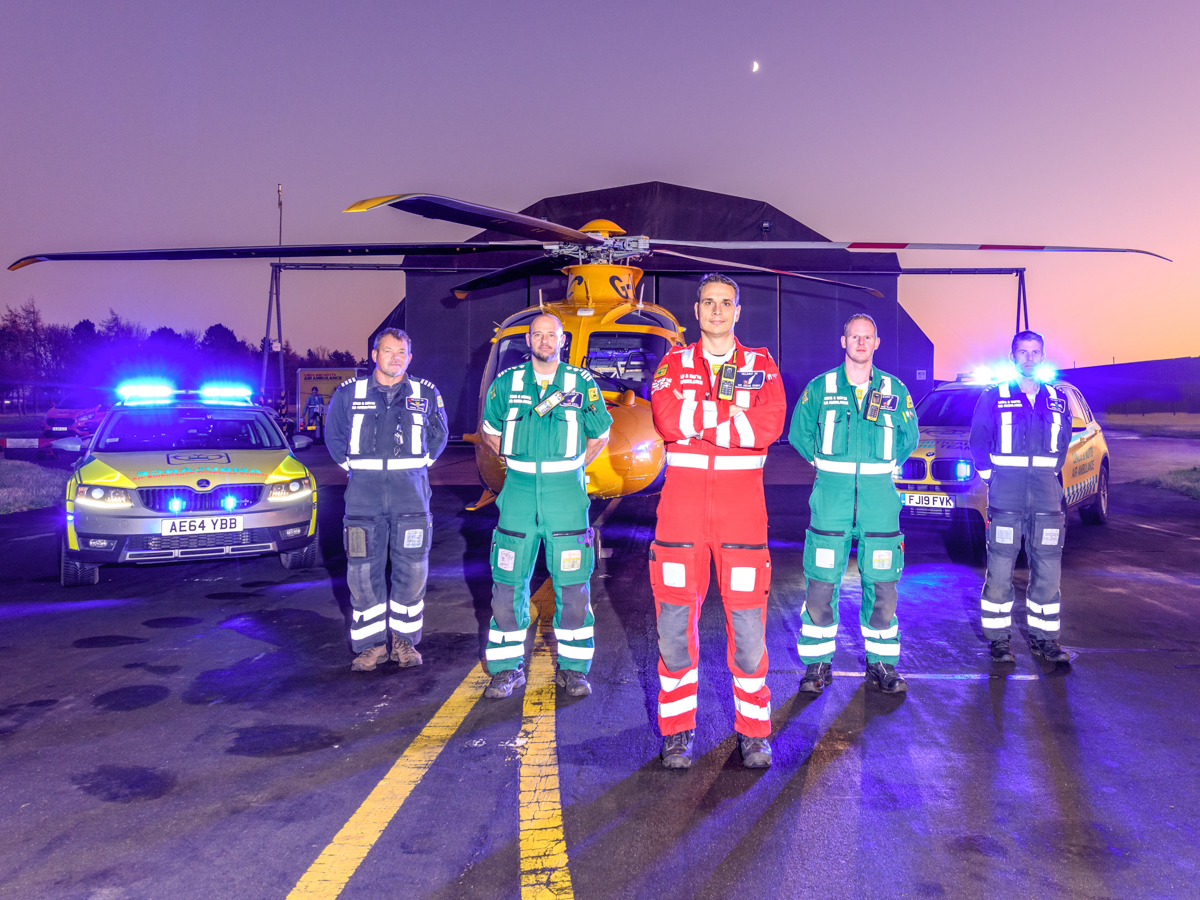 For seven days in January and February, the Lincs and Notts Air Ambulance operated its full 24-hour service, helping a number of patients in their greatest hour of need. As part of a two-year trial, the life-saving charity has been gradually increasing its operational hours to provide a 24-hour service, seven-days-a-week, which will enable the clinical crew on board the helicopter, or in the critical care car, to give more people than ever the very best chance of survival.
In this time the critical care team responded to six incidents at night, including two road traffic collisions and three cardiac arrests.

On Saturday 1st February, the crew on board the Ambucopter were called out to an emergency in Mansfield. The charity’s AgustaWestland 169 helicopter arrived on scene in just 15 minutes, covering the 39 miles that could take up to an hour by land. Once on scene, the critical care team worked alongside other emergency services to stabilise and treat the patient before airlifting them to Queens Medical Centre in Nottingham. The crew then returned to base just before 12.30am, where they remained on call as part of the charity’s 24-hour coverage through the night.

The following night, just before 9.00pm, the helicopter and crew were dispatched on another night-time mission, this time in Holbeach. The critical care team and helicopter arrived on scene in just 25 minutes, a journey that by land could have taken up to an hour. The highly skilled pilots landed the helicopter in a field close to the incident where our clinicians then worked alongside other emergency crews to help a motorcyclist who had been in a collision.
Dr Cosmo Scurr has been on a number of recent night shifts. He said: “It is truly humbling to be part of a service that is striving to provide a 24-hour pre-hospital critical care across some of the largest rural areas of the UK.

“Working towards providing a full 24/7 operation means that we are able help so many more people who are suffering from some of the most serious illnesses and injuries. During this time, we’re able to ensure that these patients are able to receive the help that they so desperately need as quickly as possible.”

The Lincs and Notts Air Ambulance currently operates 365 days a year between the hours of 7.00am and 7.00pm, in addition to at least four nights-a-week when the crew are on standby to respond to incidents throughout the 24-hour period.

Karen Jobling, Chief Executive Officer, said: “Our crew have worked tirelessly over the last few months to train additional clinicians and pilots, learn the skills involved in night flying, including the use of Night Vision Goggles, and take part in specialist clinical training, both indoor and outdoor, during the hours of darkness.

“Previous clinical data provided by the ambulance service tells us that if we can operate 24/7 consistently, we will be able to reach and treat around 400 additional patients every year. As a life-saving charity, that is phenomenal and something we are really passionate about being able to deliver for the people we serve.”

The Lincs and Notts Air Ambulance receives no direct Government funding, meaning it solely relies on the generosity and support of the local communities to keep the Ambucopter flying. Vitally, the charity will need to raise even more funds as it moves to full 24/7 operations, with the cost of providing a 24-hour service increasing from £2.5million per year to approximately £4million.

If you would like to make a donation or find out more visit www.ambucopter.org.uk.