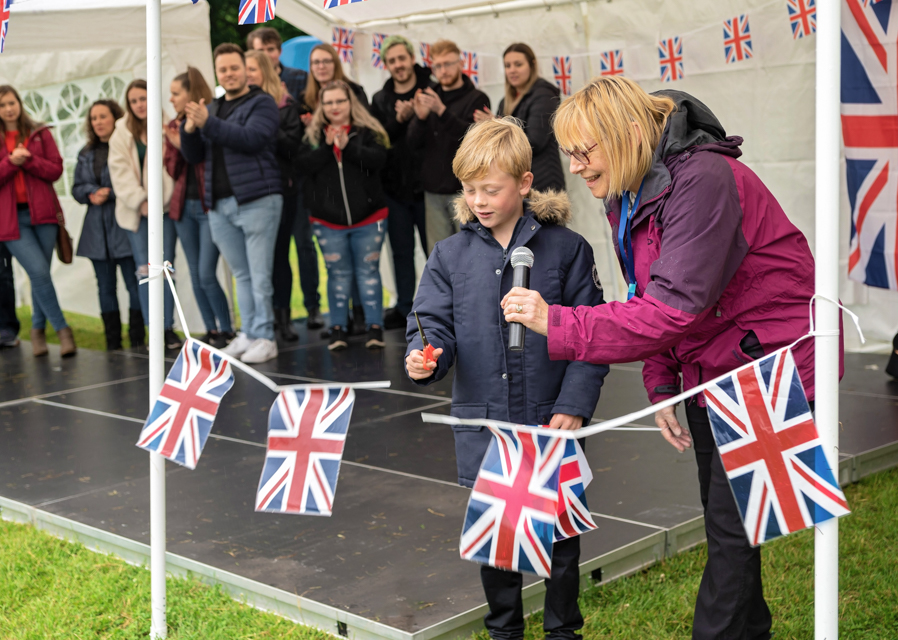 After much anticipation and mounting excitement, the day finally dawned and the heavens opened! But rain didn’t stop play at the Queen’s Platinum Jubilee Celebration Day in Lea Park on 5th June – gazebos were situated, tents were pitched and the spirit soldiered on.

Proceedings got underway at 12.00pm when the bells of St Helens Church majestically peeled across the village and park. Everyone stood proud to sing the National Anthem, nobly led by Gainsborough Musical Theatre Society and Frances Olive Anderson School Choir. Football posts champion Louis announced the Queen’s Jubilee Celebration as officially open and the fun began!

A Royal celebration for all the family

Stalls were run by Rainbows and Brownies where youngsters could express their artistic talents. The 203 Squadron RAF Air Cadets held an instant win tombola and demonstrated their intricate marching skills with drill exercises. Sporting groups Lea Park Tennis Club and Gainsborough Bowmen turned out to invite everyone to participate in tennis and archery which proved a hit. Traditional and much-loved donkeys trod Lea Park to bring old-fashioned rides around the orchard. The Lea Women’s Institute helped in the Butler’s Pantry to ensure the tea was kept poured and the cake served with a smile. Children from Street Dance, The Studio showered the crowd with a dazzling display of dance which wowed with energy. The Rugby Union Football Club offered a fabulous chance to learn the skills to penalty kick as well as showing how it’s done by the professionals. Congratulations to everyone who won in the Big Raffle Draw where the prizes included a flight over Lea, paint-balling and exclusive beauty treatments. Not to be forgotten was Bygone Lea where The Delvers presented time-travel in the form of rare and treasured pictures.

Roll up, roll up and try your luck on the coconut shy… one boy continually returned to eventually win six coconuts and one little girl knocked down three coconuts with three consecutive balls. Give that girl a coconut! And all to the backdrop of Disco Bob and his mobile music machine.
Rocking in the rain!

The scene was set for more music as local master builders DLS Construction had transported the school’s stage to site. Under strings of Union Jack bunting, popular band Just for Kicks performed a showcase of songs which had the spectators rocking in the rain. Covers from George Ezra and Ed Sheeran were sprinkled amongst the favourites Hi Ho Silver Lining and Sweet Caroline. Naturally, all this activity was going to work-up an appetite so there were plenty of tasty offerings. The Munchy Box, The Queen’s Cod Wagon and Dinky Donuts offered delicious hot food and treats to everyone’s liking.

What is the Queen’s favourite weather? Reign! And in the words of the National Anthem “Long to reign over us”. It certainly did! But none of that stopped the day from making memories and paying a fitting tribute to our Queen. Thank you, Ma’am. Lea Parish Council and the Jubilee Steering Group thank the many volunteers who gladly and cheerfully contributed to make this event possible.

Have you been caught on camera? Photographs cost from just £1.00. Visit the website: victorialouisephotostudio.pixieset.com/leapark-jubileeevent2022.