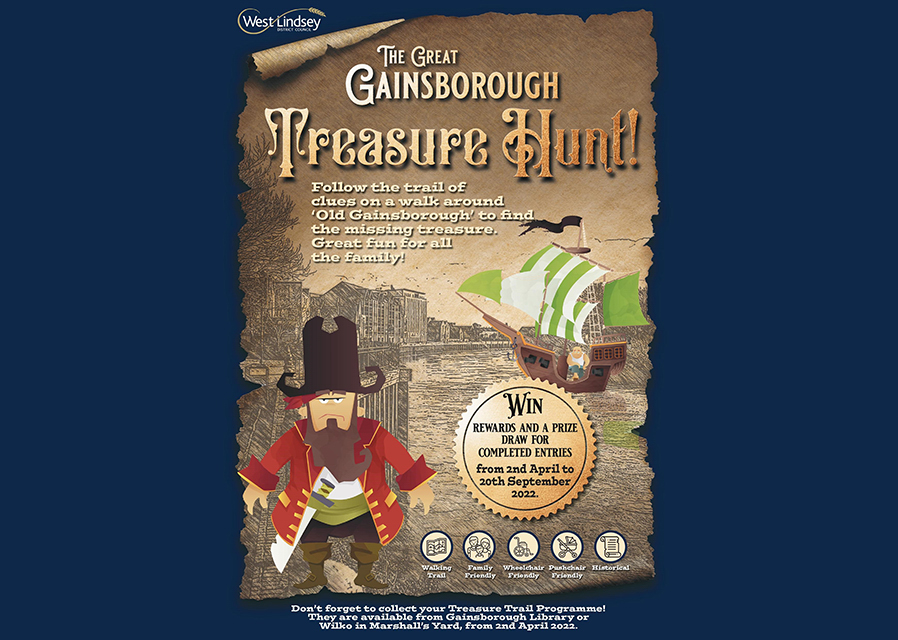 An exciting new treasure hunt activity is about to begin for the summer of 2022 in Gainsborough. From Saturday 2nd April you can collect the colourful Treasure Hunt booklet free of charge from Gainsborough Library and Wilko in Marshall’s Yard.

The Treasure Hunt is based on a legend that a casket of gold coins intended for Bonnie Prince Charlie’s Jacobite Rebellion was discovered on a ship at the port of Gainsborough in 1745. It was ‘confiscated’ then never heard of again.

The challenge is to follow clues along the route from Marshall’s Yard down to the riverside path, writing down the answers which are then decoded to find the whereabouts of the treasure.

Head to where the treasure is hidden and claim a small instant prize for children, then enter a monthly draw for a £30.00 High Street Voucher.

Theresa Workman, Townscape Heritage Activities Co-ordinator, said: ‘’We were delighted to be able to create this new activity trail for Gainsborough which is funded by the National Lottery and the government’s Levelling Up Fund. This town has such a rich and exciting history to celebrate and we wanted to share it in a fun way. The treasure hunt makes a great interactive day out for all the family, discovering some of Gainsborough’s well-kept secrets and beautiful sights!

The competition runs from Saturday 2nd April until 20th September 2022.