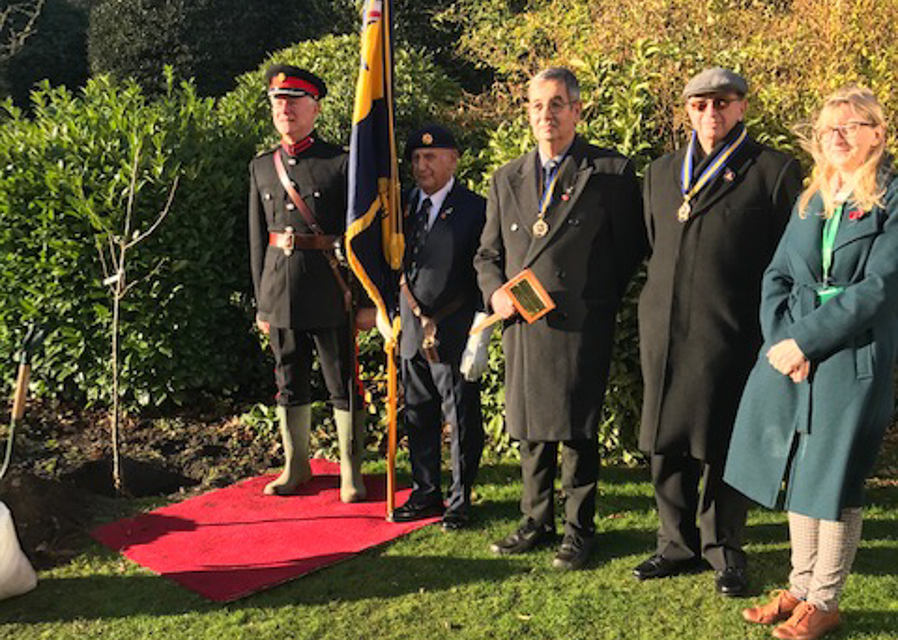 Despite the continuation of restrictions at the time of the Poppy Appeal in November 2021, the Retford and District branch of The Royal British Legion is happy to report that over £30,000 has been banked. This is due as usual to the generosity of the local community and the tireless work of the many volunteers. The branch Poppy Appeal Organiser, Mrs Ann Hickman, has decided to step down from this role although she continues as secretary of the branch. Ann has built the amount raised year on year and will be a hard act to follow. In appreciation of her contribution to The Royal British Legion, Ann was recognised with a national award in the 100-year celebrations. A well-deserved acknowledgement of her hard work and dedication.

The last of the three trees to celebrate the branch centenary was planted in the garden at Bassetlaw Museum on 10th December by Deputy Lieutenant Nigel Chapman. Everyone present was encouraged to take part in the planting. The choice of a traditional apple tree was made by the staff at the Museum. The event was attended by RBL members and local dignitaries and was followed by light refreshments.

Following many years as Chairman and then President, Chris Hickman decided to stand down at the AGM. The new President is Stuart Yates who has already played an active role in this position by signing the Armed Forces Covenant renewal on behalf of The RBL at Bassetlaw District Council.

As we ease back into some form of normality, the monthly meetings have recommenced and are held on the first Monday of the month at Babworth Road Sports and Social Club, starting at the earlier time of 7.00pm. The branch will be looking to be involved in fundraising events such as Charter Day and several events in Harworth. Remembrance events will be taking place specifically this year for The Falklands War. Details to follow.

For further information on the work of The Royal British Legion visit www.britishlegion.org.uk or call 0808 803 8080. New members are always welcome, and you do not have to have a military background to be a member. Call in at one of the monthly meetings or have a chat on Charter Day.