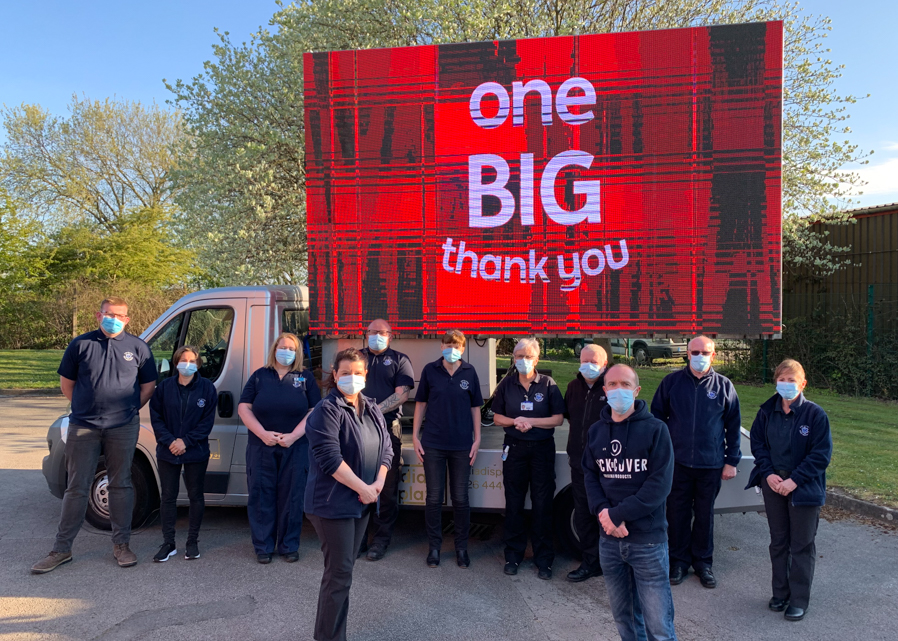 The co-ordinator of the Misterton-based Five Villages First Responder (FVFR) scheme has received praise and recognition from the local community and TV celebrities after being nominated for a surprise “One Big Thank You” as part of BBC1’s The One Show.
Martyn Johnson got more than he was expecting when he arrived for a recent team training evening. Little did he know that Community First Responder Karen Hibbert had nominated him to receive the accolade for his voluntary dedication to the team and his local community. Karen said: “I nominated Martyn because he has been leading our responding group since 2004, he manages the team, he leads our training, organises all our equipment and raises funds too.”
The surprise thank you aired on The One Show on Thursday 6th May. Viewers saw Martyn arrive at what he thought was a routine training session at Misterton’s Fire Station. The evening started with the First Responder team watching what Martyn was led to believe was a training DVD, but he soon realised all was not as it seemed when TV presenter and former police officer, Rav Wilding, sprang the surprise over a live video link.
The surprise then continued as Martyn was led outside to find a small socially distanced crowd of friends, family and team members. A big screen then began to play heart felt messages of thanks from fellow colleagues, patients who he has helped over the years and some of Martyn’s favourite celebrities too, including comedian Matt Lucas, former football player and Match of the Day host Gary Lineker and radio DJ Dave Pearce.
The messages of thanks came thick and fast including from friends and long-standing members of the FVFR team Libby Stennett and Mary Riches, as well as from Mick Barnett-Connolly Head of Community Response for East Midlands Ambulance. There was hardly a dry eye in the house when Misterton resident Rebecca Ford thanked Martyn on behalf of her family for the time when he responded to her baby nephew. She said: “Six years ago my beautiful baby nephew was lifeless and in distress, but without you being so selfless and responding and giving him the vital oxygen that he needed, that night could have been completely different.” Rebecca went on to say that he is now a fit and active six-year-old boy.
Former Misterton resident and Martyn’s friend since childhood, Peter Potter, also appeared on the show to give his thanks. Peter described how he’d been injured when he returned to Misterton to play in a sporting match last August and had experienced Martyn’s care first hand at the scene of the accident. “I landed head first and had broken my neck and fractured my skull, without Martyn being there I don’t know how much differently things may have turned out,” said Peter in an emotional message.
Martyn was a founder member of the FVFR team and has continued to be the volunteer coordinator and a responder in his spare time, as well as working as a full time paramedic and operations manager with East Midlands Ambulance Service. The voluntary group currently consists of 14 dedicated members and has gone from strength to strength over the last 17 years, attending hundreds of 999 calls annually in support of the ambulance service. The Community First Responders live in the community and are trained by the ambulance service to respond and begin care of a patient while the ambulance is on its way following a 999 call. The FVFR team cover the villages of Misterton, Beckingham, Walkeringham, Gringley on the Hill, West Stockwith and surrounding areas. Martyn has spearheaded other local initiatives with the support of his team, including the installation of 19 Community Public Access Defibrillators as well as free to access CPR and defibrillator training.
Martyn said: “I am absolutely shocked, overwhelmed and very humbled to receive such as lovely surprise. I have enjoyed every minute of the last 17 years volunteering alongside such a fantastic and dedicated group of people. We are a close-knit team and it is a pleasure to work with them all. Without all their hard work and devotion to the community and without all the support we receive locally, none of what we do could happen, so this thank you is for everyone.”
The Five Villages First Responder team are always on the lookout for support and for new volunteers. For more information see the website www.fvfr.co.uk or the team’s page on Facebook.