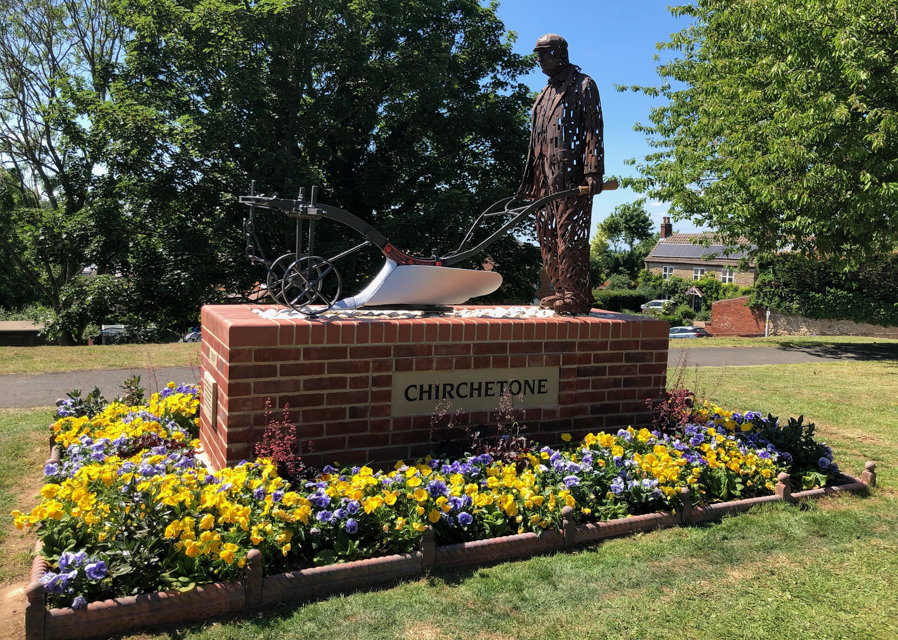 New landmark in Kirton in Lindsey

“Grandad’s Plough – In Memory of Harry and Fred Clarke”, created and designed by Tony Bartlett of Traingate, Kirton in Lindsey, was officially unveiled on the afternoon of Saturday 12th June. A big, socially distanced turnout assembled at the site in the June sunshine to finally see what had been kept hidden under wraps for months. The plinth reads Chirchetone which is the original recorded name for Kirton in Lindsey, meaning “important town with a church”.
Tony gathered the assistance of residents of Kirton in Lindsey – Jonathan Fallas for the building work required, Mick Holmes for internal metal work, Pete Yallop for paint and equipment and the plough was donated by John Barber. The plaques on the sides of the plinth were made by Jason Threadgold Funeral Directors.
The ploughman sculpture was created by James Sutton who works from a studio based at Harpswell.
The Deputy Mayor of North Lincolnshire Council, Councillor John Briggs, attended the unveiling and presented Tony with a plaque from the North Lincolnshire Council SSE Sustainable Development Fund, which contributed £10,000 to the project. North Lincolnshire Council Ward Councillor Trevor Foster also attended following his assistance and support very early in the project to enable it all to begin.
Kirton in Lindsey residents Derek and Julie Lawrence created a drawing to bring Tony’s idea to life and the photography skills of Maria and Bill Rhoades documented the project from start to finish.
The project received the support of Kirton in Lindsey Town Council who applied for planning permission, funding and supported the project from the initial design work Tony presented at meetings through to adoption of the new landmark. The Mayor of Kirton in Lindsey, Councillor Pat Frankish, led the unveiling event with the town’s Rev Kathy Colwell also performing a blessing of the monument.
Generous donations from residents completed the project fund, making the completion of the project possible. The youngest donors, Jessie and Adian, contributed their pocket money and Tony honoured them with the task of unveiling Grandad’s Plough to thank them for their generous support.
Kirton in Lindsey Town Council would like to thank all involved with the project and to congratulation Tony and the team who have worked closely with him.