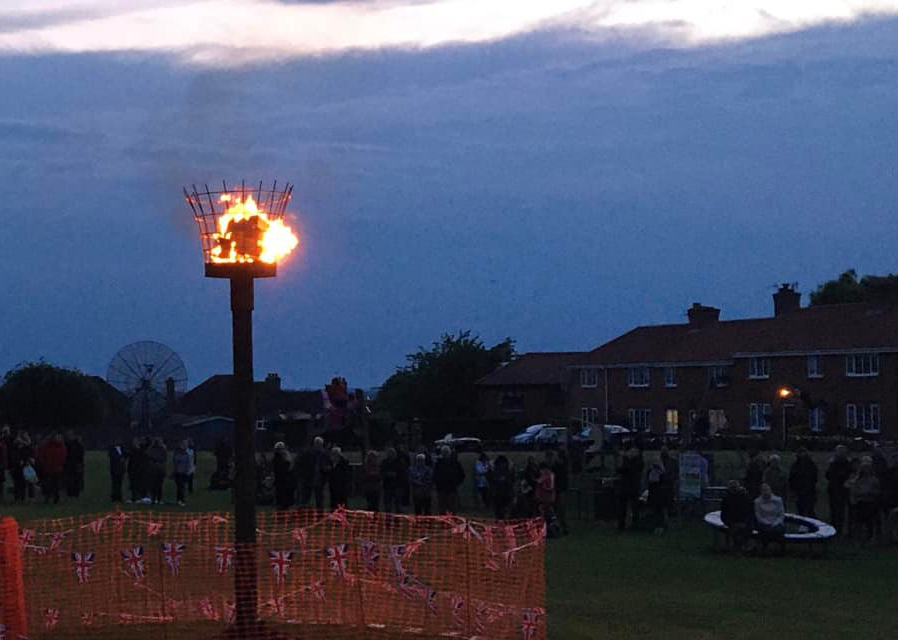 A number of events to celebrate the Platinum Jubilee at Kirton in Lindsey were held on Thursday 2nd June and Saturday 4th June. Events were coordinated by the Town Council and Town Hall, with generous donations and time and energy from private individuals, local businesses and organisations.

Events started on Thursday when the official Proclamation was read by Bruce McKenzie, appointed Town Crier for the weekend, on the town Green. Following this the St Andrew’s United Church bell ringers let the bells ring out. A temporary beacon was made within the town by a resident metal worker, and put into position on the town Green to join the national and wider Commonwealth beacon lighting schedule. A trumpet call by resident Rebecca Melling (in place of local pipers and bugle players who were unable to attend) followed a recording of the official piper and then the local choir sung the official Platinum Jubilee song. The beacon was lit as the gathered crowd of residents were encouraged to join in the singing.

Saturday saw the Market Place closed to traffic and tables set up for residents to come together for a street party. Chairs were generously provided by the Royal British Legion who had also generously bedecked the Market Place with flags. Despite the wind and cold, the event kicked off at 12.00pm with a re-reading of the Proclamation by Bruce and a welcome from the Mayor, Councillor Joy Kofoed. A 40s / 50s swing band struck up to get the party started and were followed by an array of entertainment from local groups including Coleby Ploughjag, The Music and Dance Journey and Starlight Arts. The Mayor of North Lincolnshire, Councillor Briggs, attended to welcome Starlight Arts, a charity he is currently supporting. Kirton in Lindsey heritage was also supported with displays and a trail by the Kirton in Lindsey Society. Presentations were made by the Mayor for children’s crown making and for the Kings and Queens themed annual scarecrow competition. Look North attended and provided a very good overview of the event during the evening’s news bulletin.

Thanks are given to everyone involved in bringing the community together to celebrate, from private residents, to local charities and organisations and businesses based in the town. Across the extended bank holiday weekend smaller groups also got together for their own celebrations and gatherings, including a street meet organised by the residents of South Dale Close and West Dale Crescent. The events have created many memories across the age groups at Kirton in Lindsey as they joined in the wider celebrations.