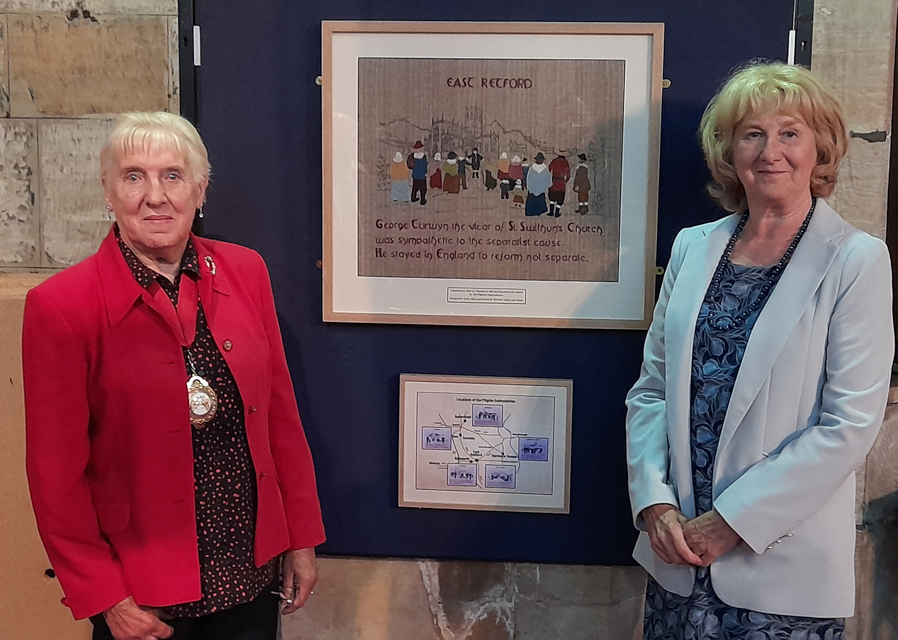 Councillor Carolyn Troop, Town Mayor of East Retford, at her first official event, installed the first of the five Pilgrim Embroideries at St Swithun’s Church in Retford.
Five large embroideries have been made to commemorate the Mayflower 400 celebrations by a small group of North Nottinghamshire embroiderers, known as The Pilgrim Embroiderers. The works are being donated to the churches at Austerfield, Babworth, East Retford, Scrooby and Sturton le Steeple, that can be found along The Pilgrim Trail.
Designed by Jenny King, they represent the church leaders and typical 17th century congregations, many of whom sailed on the Mayflower. The embroideries were worked on large frames using specially woven woollen cloth and threads. The figures on the St Swithun’s embroidery were mainly worked by Beverley Naylor, the church and background by Jenny King.
A book, ‘The Pilgrim Embroideries Made in Retford, Nottinghamshire’ has been published explaining the processes undertaken and the embroidery stitches used, and especially highlights the development of community involvement during the two years of construction from inception to completion. Copies are available from Bassetlaw Museum, and Retford Arts Hub.
Dick Lewis, Priest at St Swithun’s Church said: “We are delighted to receive the tapestry to display in St Swithun’s Church. Here we recall that many Separatists chose to stay behind whilst the Pilgrims were making their journey to the New World. People like George Turvin, who was Vicar of St Swithun’s and later Rector of Babworth, decided to remain in England to try to reform the Church of England from within.”
Isabelle Richards, Heritage Engagement Officer, Pilgrim Roots Project, Bassetlaw Museum said: “It’s fantastic to see the St Swithun’s Pilgrim Embroidery installed in the church. This will be great addition to the attractions of St Swithun’s to Pilgrims Trail visitors and be a positive sign of the 400th anniversary commemorations for years to come.”