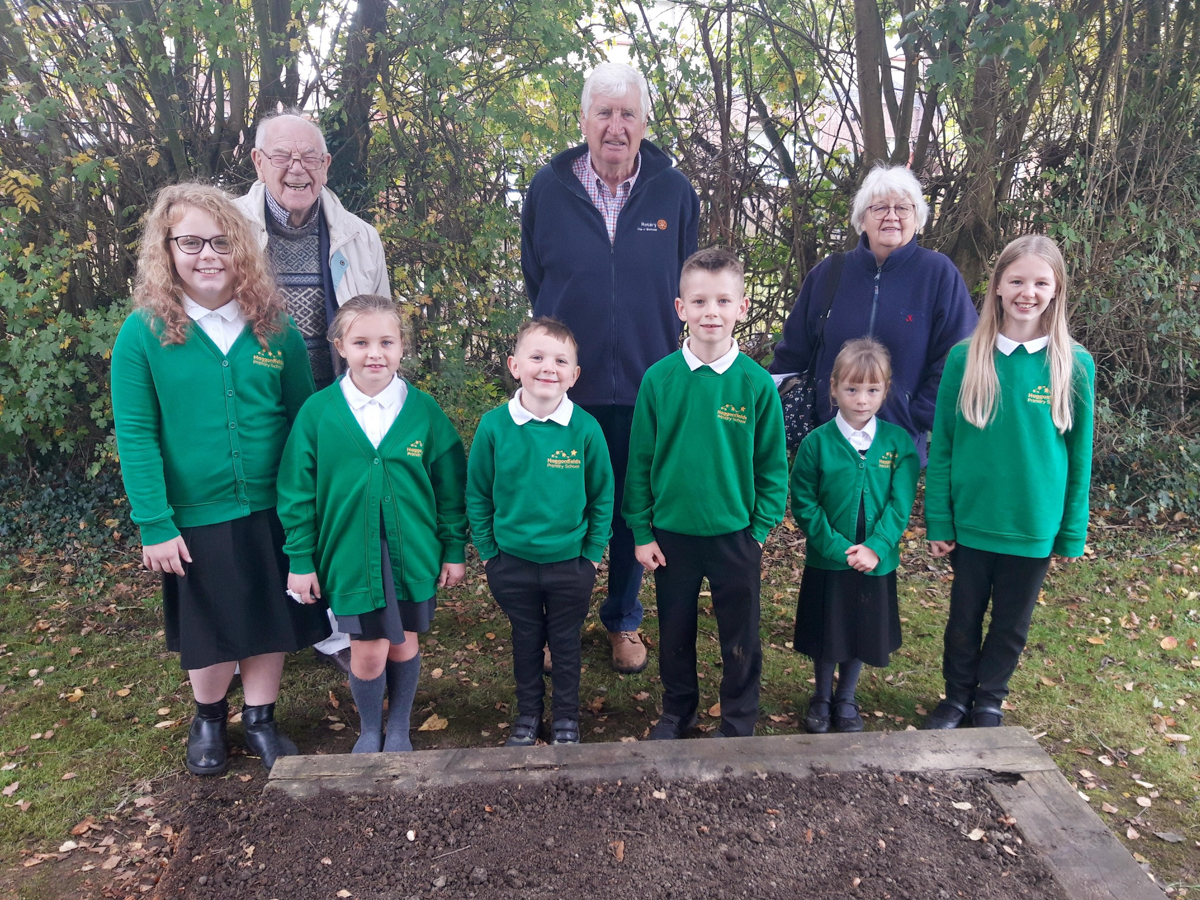 Children at Haggonfields Primary School were delighted to receive the gift of 1,000 crocus bulbs from the Worksop Rotary Club. The purple flowering spring bulbs were gifted as part of Rotary’s Purple4Polio drive, and to raise awareness and support for World Polio Day, held each year on 24th October. Worksop was one of thousands of Rotary clubs across the world taking action on this day to raise awareness, funds and support to end Polio.
Since 1985, Rotary has been working worldwide to eradicate polio, contributing more than £2.1bn to the effort. This vaccine preventable disease still threatens children in parts of the world today. If Polio is not eradicated it is estimated that within 10 years as many as 200,000 children annually all over the world could succumb to Polio, including in the UK.
Globally, more than 2.5 billion children have been protected against the disease, which has reduced the number of cases by 99.9% from around 1,000 per day in 125 countries. Rotary has committed to raising $50million each year to support global polio eradication efforts and thanks to the Bill and Melinda Gates Foundation every £1.00 they raise is matched 2:1 so is worth £3.00.
In August, Rotary and the world celebrated a significant milestone, as the World Health Organisation certified the Africa region free from wild Polio. This leaves just Pakistan and Afghanistan as the two remaining Polio endemic counties in the world. But despite the momentous progress more challenging work lies ahead to eradicate the disease for good.
Mrs Handley-Sawer, Head Teacher at Haggonfields Primary School, said: “We were delighted that our school council had the opportunity to work with Peter Swinscoe and members of the local Rotary club to plant one thousand purple crocus bulbs in the school grounds. The staff of Haggonfields are proud to have such strong links with our community and grateful to The Rotary club who volunteered their time to weed and prepare the four raised flowerbeds on the school grounds.”
“Now we can all look forward to the spring display and remember and honour the work of those fighting to end the spread of polio.”
Many Polio related activities use the colour purple, which has become a symbolic colour in the fight against Polio, inspired by the colour of the dye painted on the little finger of a child to signify they have received a potentially life saving Polio vaccine.
Pupil Maddison Bull (aged nine) said that everyone was looking forward to spring display and will remember the good cause behind the effort and added: “The flowers will really brighten up our playground!”
President Ken Thompson of the Rotary Club of Worksop commented: “The club has supported the End Polio Now campaign since 1985 and has raised many thousands of pounds and this is one of the many volunteering activities the club is involved in every year. The members of the Rotary Club of Worksop remain committed to working with our communities and our partners to eliminate this potentially deadly virus and make Rotary’s dream of a Polio free world a reality.”
Please contact The Rotary Club of Worksop to find out more about activities you can get involved in to help end Polio. You can also find out more by visiting www.rotarygbi.org/join. The Rotary Club of Worksop has been serving the community of Worksop area since 1928 and currently has 22 members and meets by Zoom every two weeks.