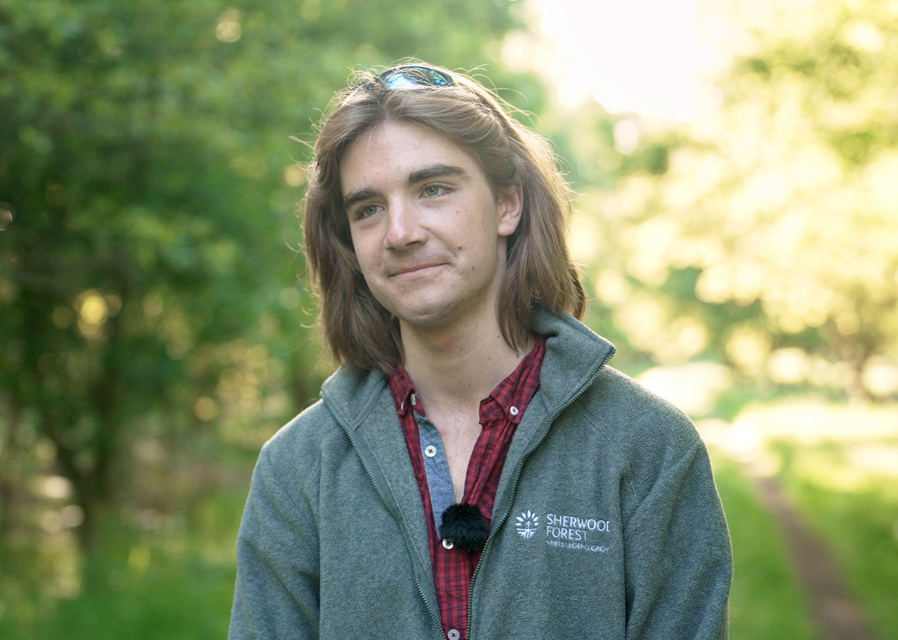 Young Sherwood Forest volunteer Indy Kiemel Greene has been named as a recipient of the Points of Light Award – the Prime Minister’s own award for contributions made by inspirational volunteers.

Indy was named as the Point of Light for Tuesday 21st June, becoming the 1,945th person to receive the accolade since it was instituted in the UK in 2014. The award is announced each weekday and Indy’s nomination recognises his commitment to the environment and bird conservation.

Since he began volunteering at Sherwood in 2018, 17-year-old Indy has helped to lead guided nature walks at Sherwood Forest and Budby South Forest, which together comprise Nottinghamshire’s only National Nature Reserve.

He also gets hands on with the practical conservation work at the reserve and takes part in the regular bird surveys to monitor the health of species which nest and breed at Sherwood and Budby.

In December 2021, Indy was a recipient of the President’s Award from the Royal Society for the Protection of Birds, which has managed the Sherwood Forest NNR for the past four years. The President’s Award is given to just six RSPB volunteers each year – out of a volunteer community of 12,000 people – to celebrate the hard work and commitment of those who go the extra mile to save nature.

Indy, who hopes to work in conservation, has already clocked up a number of media appearances and has a strong social media following, often posting pictures and updates from Sherwood and Budby.

He recently appeared with fellow volunteer Jack Baddams on the BBC’s Springwatch series, highlighting the work being done at Sherwood to monitor the population of lesser spotted woodpeckers.

Indy said: “Sherwood Forest has always been my local patch ever since I was little and I love helping out on all the conservation work parties here. Seeing the site transform and all the new species arriving thanks to all the work we’re doing is just so satisfying.

“Volunteering is the most satisfying thing I do. Working alongside like-minded volunteers making a difference to my local environment is such a richly rewarding experience. To receive the Point of Light Award alongside so many other amazing volunteers is quite an honour.”

Beccy Speight, chief executive of the RSPB said: “We are thrilled to learn that Indy had been chosen as a recipient of this award. At a time when nature is in crisis and so desperately needs all of us to be fighting for it, having passionate, inspiring, knowledgeable young advocates such as Indy is absolutely vital.

“He’s been an RSPB volunteer since he was just 13, and his drive and dedication are outstanding – he not only works incredibly hard, but is so enthusiastic when it comes to encouraging others too.”

For more information about Points of Light, visit www.pointsoflight.gov.uk.