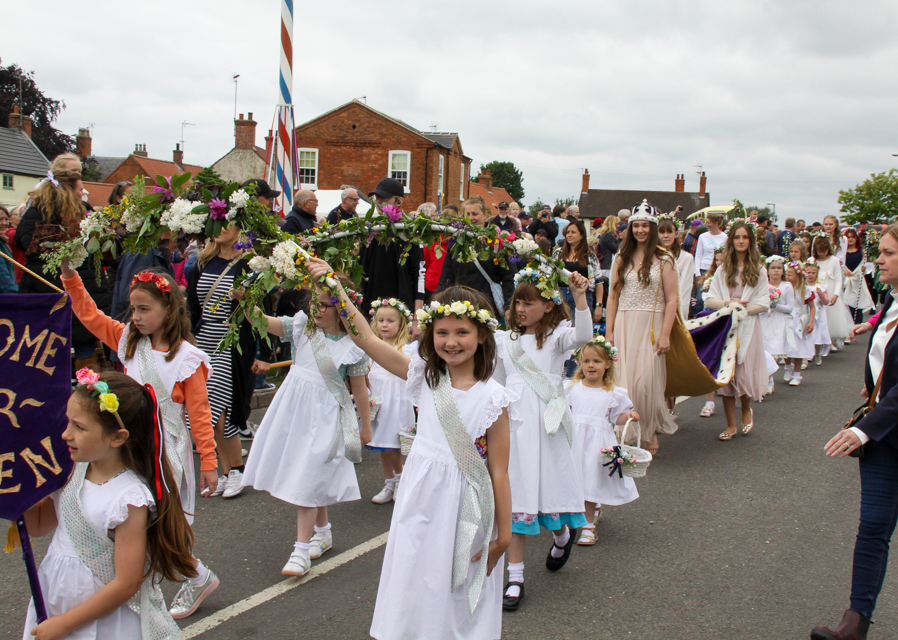 2022 will go down in Maypole history as a very special year. After a two-year break due to Covid, Wellow Maypole Day returned to become a part of the Platinum Jubilee celebrations. May Queen elect Ellie Wilson had had to wait patiently from November 2019, when she was elected by secret ballot, until Saturday 4th June to be crowned. Her predecessor Lucy Hollingworth is the longest reigning May Queen in recent times, having held the title since May 2019.

Large crowds turned out for the return of this much-loved village festival, which featured the children’s procession from St Swithin’s Church and the crowning of the May Queen, followed by children dancing around the red, white and blue maypole on the village green. All the traditional favourites were back – Wellow Jack and the Bogies, Morris dancing by local side Rattlejag, Luke Owenson’s Punch and Judy shows and the children’s swing boats.

There were also several surprises in store for spectators. At 1.00pm there was a flypast by a Hurricane aeroplane of the Battle of Britain Memorial Flight, which only two days before had been part of the Platinum Jubilee flypast over Buckingham Palace! Piloted by the station commander of RAF Coningsby, it flew over the maypole green three times much to the delight of those on the ground.

In the spirit of the Jubilee, some audience participation was encouraged during the maypole dancing. It was good to see some dads and their sons taking part. During the children’s dancing it was realised that there were at least ten past and present May Queens around the green, and so they decided to give an impromptu performance of the dance ‘Amo Amas’. Spanning 65 years and joined by this year’s Maids of Honour, the ladies had clearly not forgotten their lessons and the dance was step perfect!

The day ended as always with the May Queen’s banquet in the Memorial Hall for all the children taking part. Maypole Day 2022 drew to a close as the Grand Prize Raffle was drawn, with many of the crowd commenting on how much they had enjoyed the return of this much-loved village event!