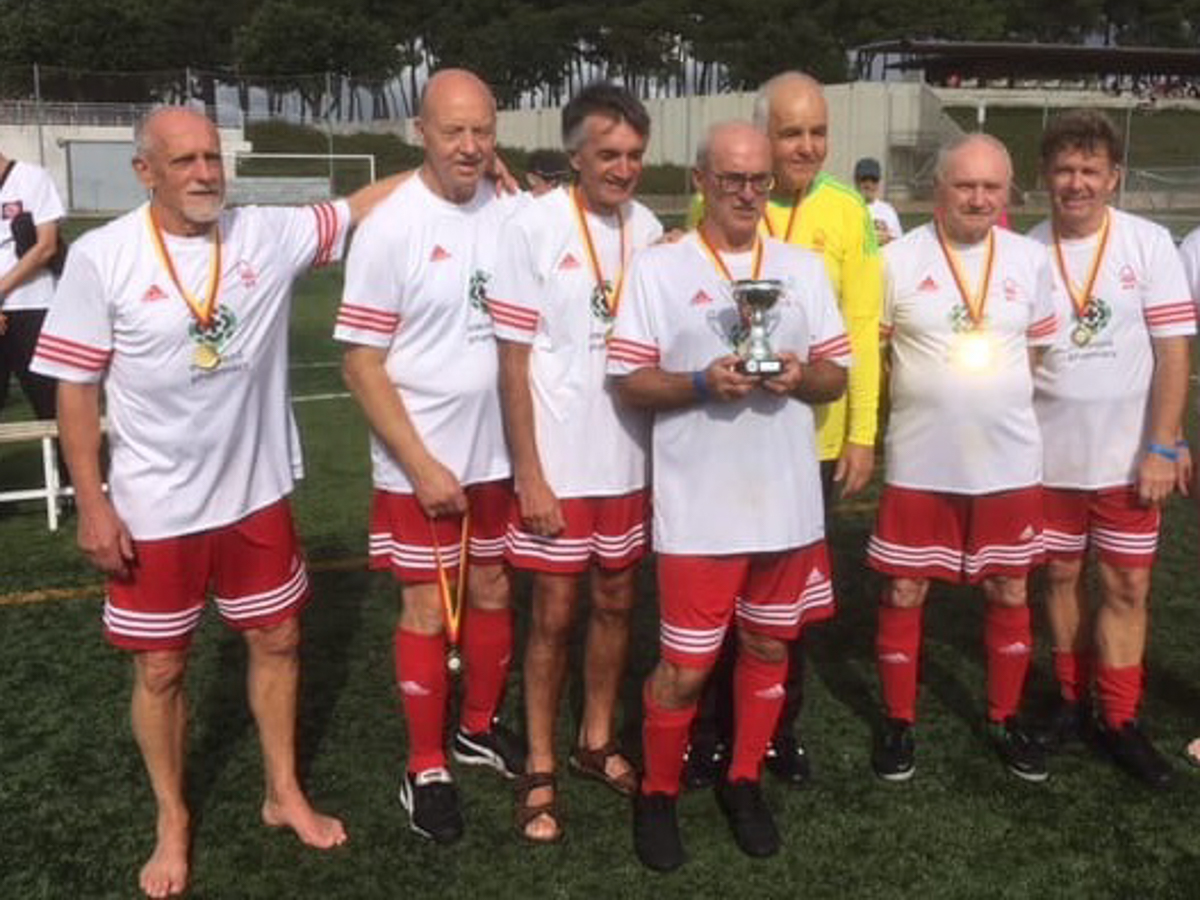 The Mansfield ‘Team of the Year’

Chris Adkin, of Adkin Sinclair, sponsors of the award, presented the ‘Team of the year’ trophy to Mansfield Senior Reds secretary Peter Mitchell and Treasurer and Team Manager Silvano Taylor.

2018 saw ‘the Reds’ win five tournaments before clinching the ‘Team of the Year’ award. There was a Derbyshire festival win, followed by a Bluebell Wood charity event and victories at Mansfield and Dronfield mini tournaments. Finally, the club travelled to Spain in October where they won the Lorus Copa Espanola Over 65s tournament and were plate runners up in the Over 50s section, competing with sides from England, Scotland, Spain and Italy. Another European Cup winner became the club’s first president in 2018, the former Nottingham Forest captain John McGovern.

In the Spanish Over 65s tournament MSR came out winners with an unbeaten record and didn’t concede a goal in the eight matches contested, with Peter Mitchell making a penalty save to ensure one of the wins. In the group stage they played four games, winning three and drawing one, scoring three goals with none against, to top the table with 10 points.

Finals day was also played in a League format and they had an identical match return, this time with a 6-0 goal tally to go with another 10 points and the title. The nine goals scored were shared between Steve Haynes (four), Jez Healy (two), Steve Birkin (two) and Geoff West.

Walking football is a six-a-side version of the beautiful game and actually started as a seniors’ health initiative. MSR were founded in 2014 and are based at Mansfield Rugby Club, with a membership age range from 50 to 79. The Club has over 90 members, with between 40 and 50 regularly playing in their twice-weekly sessions on the outdoor artificial surface. Those sessions have now passed the 300 mark, with a total of 5,000 plus attendances. That’s an average of 17 going to each session, equating to 5,000 hours of ‘EE’, exercise and enjoyment from the participants who are all veterans keeping fit and active! Walking football has taken off in the UK and Europe enabling seniors to maintain fitness, whilst having the enjoyment and camaraderie from competitive sport. In some instances the sport has turned lives around by providing support and becoming a life changer to some members who have say lost a partner and have become solitary.

In addition to playing, the club also had a busy social calendar during which they have been proud to raise funds for local charities, which this year included the Sir John Eastwood Hospice and the Bluebell Wood Children’s Hospice. They have plans in the very near future to contribute to the scanner appeal at Kings Mill Hospital. To find out more about the club call Peter Mitchell on 07837 661703.