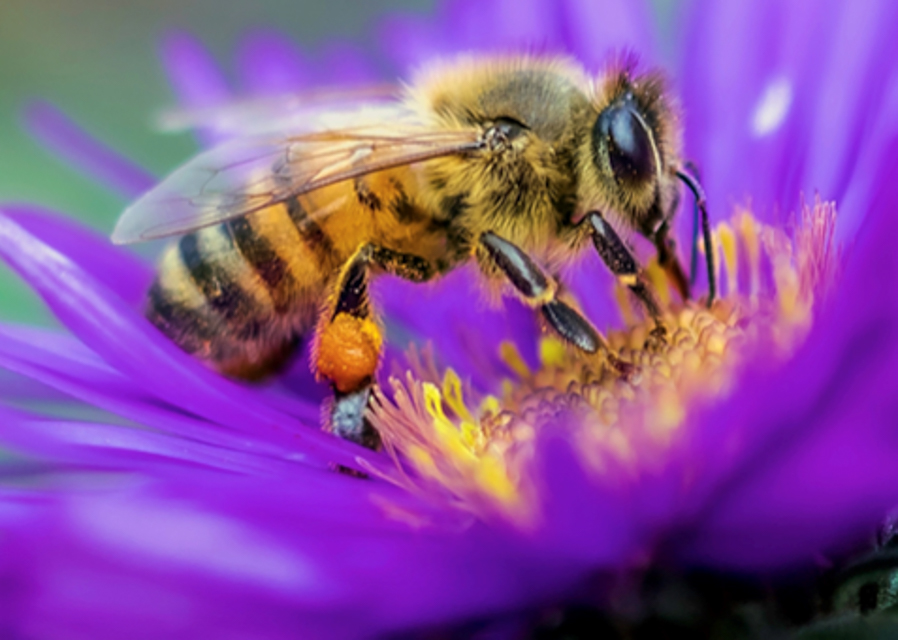 Nottinghamshire Environmental Association member Colin Watkin gave an illustrated talk about the English Honey Bee at the group’s October meeting, starting with how his interest was sparked at the age of eight years old and has led to him having a maximum of 20 hives of his own. His participation in Apiary was only reduced by the allergy to bee stings of a close relative.
Honey Bees are of the Genus Hymeneptera (or membrane wings) of which there are 450 species in Britain – but there is only one Honey Bee. Colin pointed out that all Honey Bees are wild.

Going through the Honey Bee year, he started with winter when a normal hive has some 20,000 bees. Eggs are laid in the centre of the hive where it is warmest. The bees use the honey as their winter food, so in a commercial hive, where the honey has been taken out, it has to be replaced by sugar syrup. To maintain the temperature of the hive the bees many flap their wings to increase their body temperature.

Spring sees the Queen Bee starting to lay her eggs. A Queen can live for up to five years. She mates with one of between two and 500 Drones (males) before staring her season of egg laying, increasing the hive number to between 50,000 to 60,000 Worker Bees. Each of these carries out a specific task in the hive – foraging to collect nectar and pollen, cell cleaning, feeding the developing larvae, guard duty to prevent ‘strange’ bees getting in the hive, cooling the hive – although it is unclear how the individual bee knows its role.

A swarm forms when the hive is over-full and a second Queen is produced. Again, it is not fully understood what triggers the development of a second Queen. The swarm is the second Queen and a group of Drones and Workers looking for a suitable home.

The bees make wax, which forms a honeycomb. As with many clever aspects of nature, the hexagonal shape of each cell of the honeycomb is the strongest and most efficient use of the space in a hive.

A fascinating talk! Colin did not accept a fee for his talk but asked for a donation to the Butterfly Trust.

These talks take place in Hallcroft Community Centre on Randall Way in Retford. Doors open at 7.10pm and the talk starts at 7.30pm. Refreshments are served at the end of the talk, which will usually last about one hour and 15 minutes. The fee is £2.00 for members and £3.00 for non-members.
Upcoming dates are:

Membership is open to anyone who wishes to turn up. Membership is £10.00 for the year. For further information please contact adrian.blackburn@sky.com or paul@paulwillcock.com.