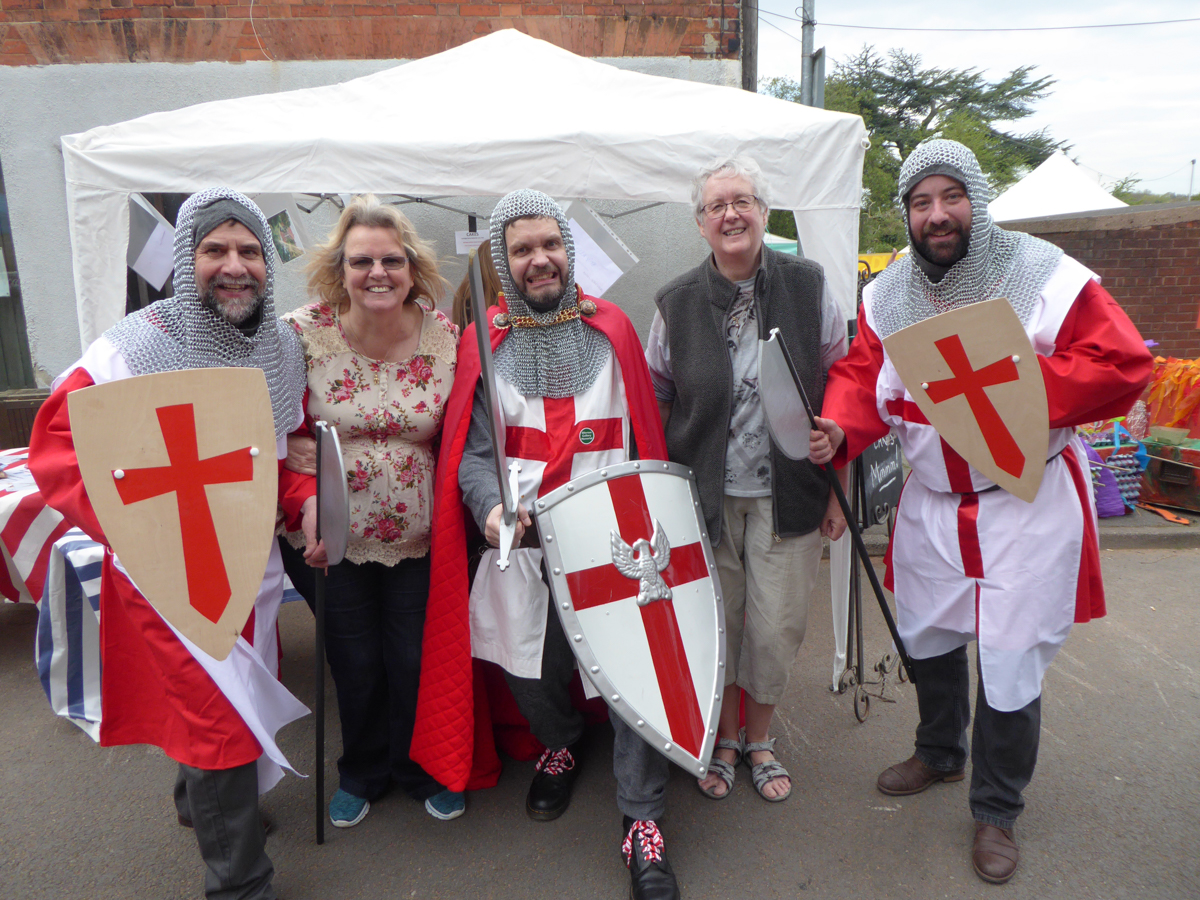 Rumours had started to swirl in early April that St George, dressed in pristine red and white regalia, would ride into Ollerton Village. Quite understandably, he brought an entourage of fierce looking knights and henchmen. St George (aka Alistair Littlewood) went into full battle with his arch enemy, the fiery and fearsome tongue-lashing dragon. So, on Sunday 22nd April, Ollerton Village was a sea of red and white flags to celebrate this most patriotic of days.

A shimmering royal blue sky held court all day to allow a full and varied programme of exciting events to go full steam ahead. Happiness and excitement spread like ink as tots, teens and the more seasoned of us ‘had a go’ on a variety of challenging but fun games.

In the meantime, Ollerton Village Residents Association (OVRA) welcomed many members, friends and VIPs to their double stall including Mark Spencer, MP for Sherwood, and County Councillor Mike Pringle plus the residents rolled out the red carpet for St George and his brave knights.

OVRA’s team of expert bakers put on a sensational spread of divine cakes: cup cakes, scones, chocolate flapjacks, a range of tea loaves, pastries, sandwich cakes and it must be mentioned, that many of the cup cakes were decorated in a patriotic colour scheme of red and white. And one batch of cup cakes was emblazoned with the slogan ‘Fix Ollerton Roundabout’. On the stroke of 12.30pm, Amadeus, the award-winning chef of the Bella Vita Restaurant, delivered an unbelievably mouth-watering fresh strawberry torte. One minute you saw it, the next minute every slice had been sold!
A hop, skip and jump away in the parish field, several new attractions were pulling in big crowds especially a tug of war contest and dog show. The dog show was professionally judged by vets Janice Dixon and Natasha Young of McPherson and partners, Rainworth. The judges awarded handsome rosettes to the class winners.

The Dukeries Community Band provided entertainment along with Ollerton Drum Corp and musician Laura Kelly.
Later in the day, the OVRA raffle was drawn by St George and County Councillor Mike Pringle with a raft of tempting prizes on offer. The association wishes to express a heartfelt thank you to the following business for their generous gift of prizes: Forget Me Notts Florists, The Hop Pole Hotel, Bella Vita Restaurant, Ollerton WaterMill Tea Shop, Aura Beauty Salon, Mark Spencer MP, McDonald’s Restaurant, County Councillor Mike Pringle and many individuals who supplied prizes. There is an unclaimed ticket, which is pink 367. OVRA also wishes to say a never-ending thank you to the ‘A’ team of champion bakers for stocking the stall with a full selection of incredibly delicious cakes.

Finally, the winds of change were blowing hard for the St George’s Day Steering Group and last Christmas the event was in jeopardy. However, an energetic new committee led by the Reverend Philip Howson stepped up to the plate and put on a superb event. Congratulations. The Reverend Philip Howson said: “It’s been such fun seeing the team grow around the St George’s Day celebrations and this year the community have been super-generous in supporting it.”