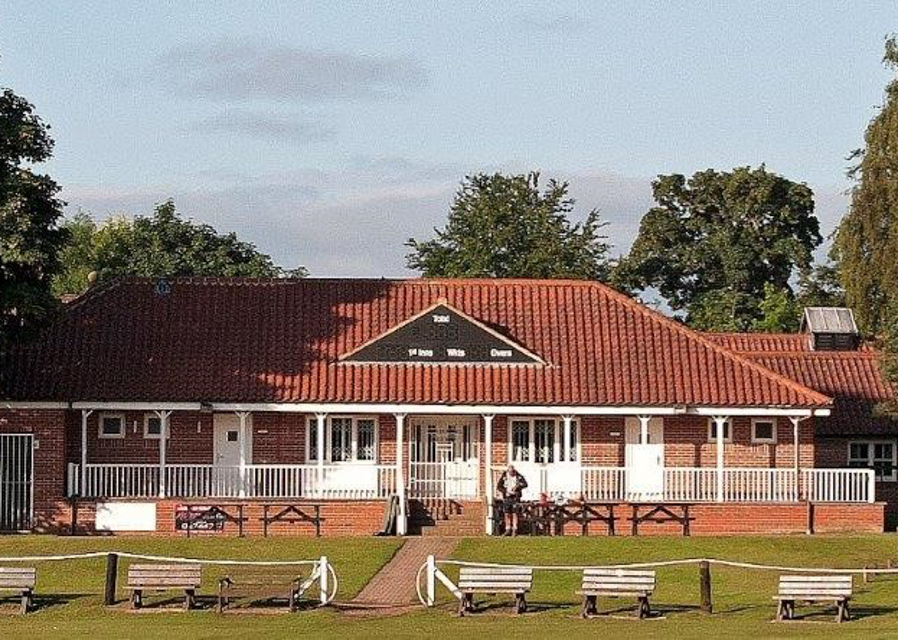 The sound of leather on willow is synonymous with the game of cricket. It conjures up an idyllic scene of sun (and often showers); of a lush green sward; of a team of white clothed players enjoying an opportunity to better their opponents – in a friendly manner of course. Which brings to mind the saying “it’s not cricket”. In other words, when an action isn’t fair or sportsmanlike.
Edwinstowe’s cricket club, being situated on the Forest Corner and in the heart of Sherwood Forest, provides a perfect location for players and watching cricket. There are records which indicate cricket being played on the same field for more than 150 years, during which time the accommodation has been somewhat makeshift. A team photo of 1880 shows players proudly sitting in front of a tent used as the pavilion. At one time a small wooden structure was used, followed by a new pavilion in 1933. Then a change of site in the 1950s, from the bottom of the ground to the current location occupying the “Legion Hut”, where the present-day pavilion was officially opened in 2004.
Maintenance of the grounds continues to be of high priority. In the early days Charles and Harry Mendham fetched water from the river in Harry’s horse-drawn cart, and one groundsman could be seen rolling and watering the wicket at 6.00am before going to work.
Many of the players were renowned for their batting and bowling, and came from families who had lived in the village for several generations. Great excitement abounded when the team had the opportunity to play against Surrey players Alec and Eric Bedser and Derbyshire’s Cliff Gladwin and Les Jackson (both test players). Those games brought in hundreds of onlookers, whose cars were closely parked all the way round the ground, which is now encircled by commemorative seats.
The opening of the new pavilion in 2004 was due to the hard work and sheer determination of those involved in obtaining funding from several agencies, including Sport England with the stipulation that the Club had to produce a sports development plan. Consequently, several members gained their England and Wales Cricket Board (ECB) coaching qualifications and links were forged with local schools to provide coaching sessions. Fundraising included ‘Buy a Brick’, which enabled the construction of a memorial wall inside the building, and a Social Committee was formed to look after and organise social events.
Today, Edwinstowe Cricket Club is part of the village community with facilities being used by other groups and organisations. The pitch is used by senior and junior cricket teams for playing friendly and league games. Friday night is practice night for the under 11s, when parents enjoy meeting for a drink and refreshments. It is no surprise that a number of other cricket clubs are keen to use the facilities. Improvements include a new batting cage; mobile pitch covers and replacement synthetic match pitch.