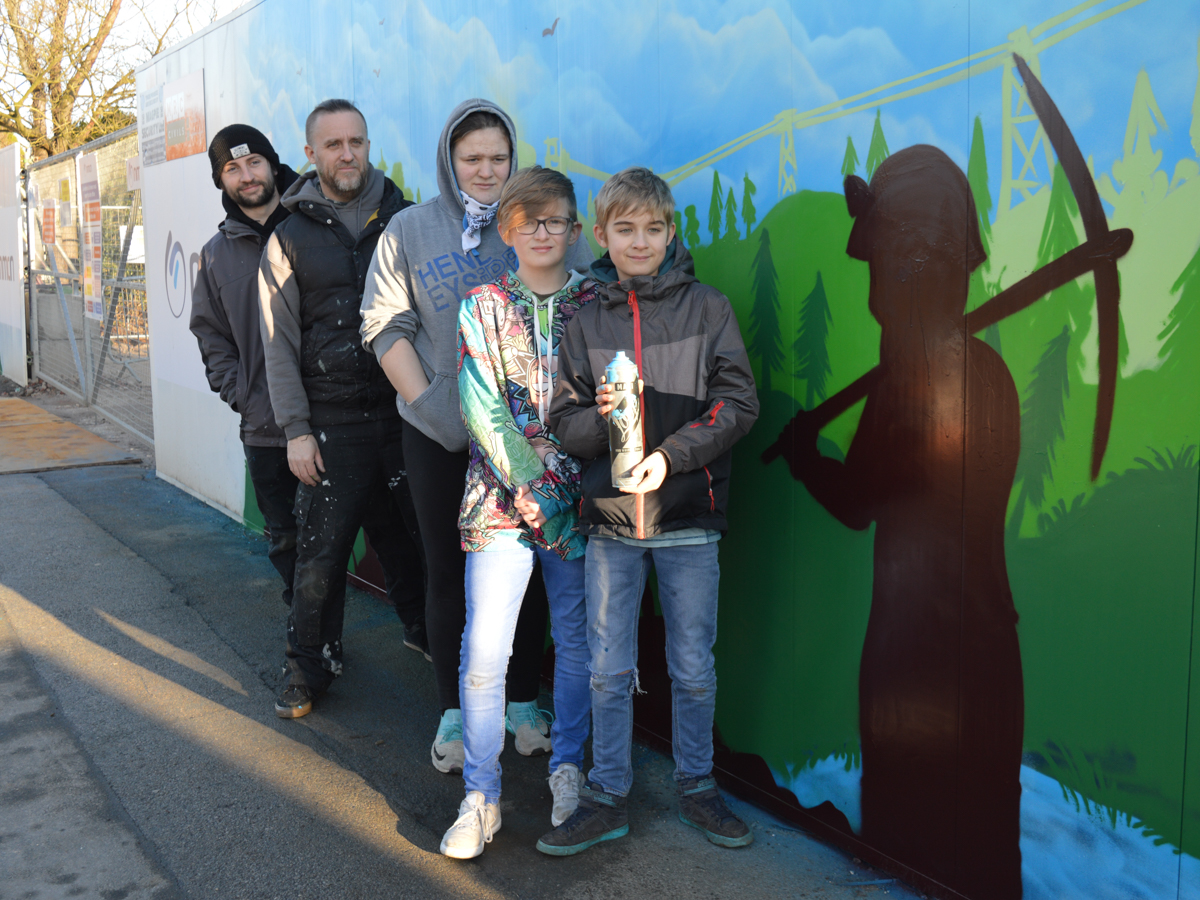 Fifty cans of spray paint were used to create a brand new 65ft long art mural, depicting a timeline of local history in January. A group of young people and a professional graffiti artist have given an area on Main Road, Boughton a new lease of life as part of a youth project co-ordinated by Newark and Sherwood District Council and Nottinghamshire County Council.

Newark-based creative studio owner and artist, James Mayle, worked with teenagers from the Dukeries Young People’s Centre to design and create the large graffiti mural which has been painted on wood hoardings where it can be enjoyed by passers-by, walkers and cyclists.

The design features a theme of village heritage and explores various local milestones since the late 1800s, from the year Ollerton Pit opened, the nationalisation of mining, the closing of Ollerton Pit, to the opening of the Sherwood Energy Village.

The new artwork has already impressed local residents, including Janet Godwin, who commented: “What a great idea it is for young people to get involved in. it’s lovely to look at and a lot of thought has gone into it, with the historical landmarks telling a story.”

The weekend-long project involved giving the hoardings an initial coating of blue masonry paint to represent the sky after which, the young people spent the Saturday afternoon working with Mr Mayle (of iMAGESKOOL), researching and developing designs on paper for the hoarding.

The group then used cans of spray paint on the hoarding in green, white and brown to depict a background of trees, hills, greenery and brown silhouettes, each reflecting a different historical landmark.

Councillor Roger Jackson, Chairman of Newark and Sherwood District Council’s leisure and environment committee, said: “The project has been a fantastic success and it was great to see local people getting involved in making a difference to their local area.

“Hoardings around housing developments don’t usually elicit excitement but the opportunity to be creative on them, as part of this project, has given our young artists the chance to express themselves, learn more about the history of their local area and feel a real sense of pride and ownership from it. It looks absolutely fantastic and the feedback from local residents has been hugely positive too.”

The scheme in Boughton follows on from the district council’s last ‘day of action’ which took place in Ollerton in October 2019.

On the day, the council partnered with iMAGESKOOL and the county council’s youth service to create a piece of art on the skate park on the Sherwood Energy Village which had previously been hit by anti-social graffiti. 60 young people from four to 15 years of age took part in the project.

Unlike similar graffiti arts projects, this particular mural, marking entrance to a new development site, will remain on Main Road, Boughton for 18 months after which time it will be given a new home in another location in Ollerton.