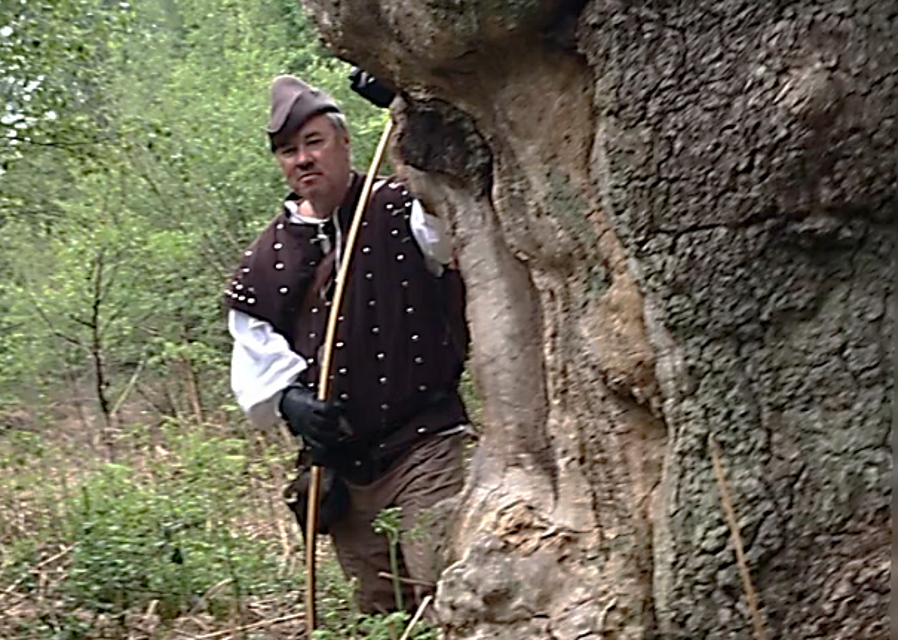 Viewers familiar with the BBC antiques show Bargain Hunt will be aware that during the course of the programme visits are made to local places of interest. The BBC contacted the Edwinstowe Historical Society and asked for cooperation with a section regarding Sherwood Forest while filming at the Newark Antiques Fair in June. The interest was focussed on the sustainability of the oak trees in Sherwood Forest and how they’ve shaped the furniture landscape in some of the most iconic places, such as St Paul’s in London and Lincoln Cathedral, and on the Royal Navy’s ships.
The film crew visited the St Mary’s Church in Edwinstowe and were shown WA Tudsbury’s carvings in oak. Centuries ago, travellers through Sherwood Forest would have quaked at the prospect of meeting outlaws such as Robin Hood and his merry men. However, this was not the case when the BBC team came face to face with local resident Robin Hood (Greg Abbott) who accompanied them to the Major Oak.
The crew spent many hours ensuring that people were in the right place for a specific time knowing that the end result would be an “insert piece” lasting a few minutes. Viewers will be interested to see the final result when televised at a future date – hopefully the contribution won’t end up on the cutting room floor.
In the absence of the society’s Annual General Meeting in May, both the chairperson’s and treasurer’s reports were published in a newsletter which was circulated to the members advising them that no date had been decided for the resumption of monthly meetings. However, they were assured they would be notified as soon as it is safe to be together.
Readers looking at the society’s website, www.edwinstowehistory.org.uk, may have seen the reference to the Edwinstowe air crash in February 1944. If anyone has any information regarding the crash, please contact EdwinstoweHistorySoc@gmail.com or admin@newarkairmuseum.org.