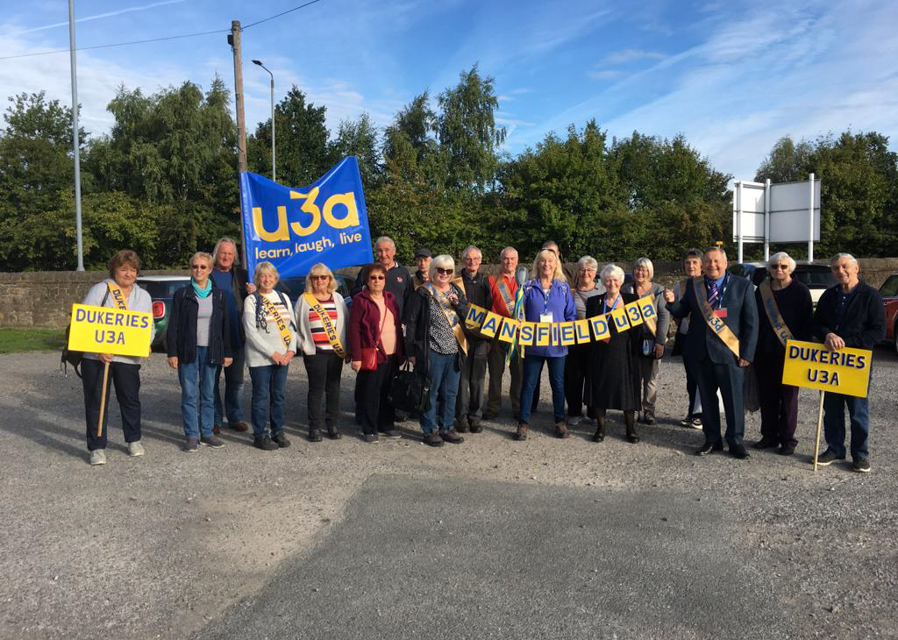 Owing to the sad occasion of Her Majesty’s funeral, the transfer of the celebratory u3a beacon from Worksop u3a to Dukeries u3a was rescheduled to Sunday 18th September. This took place at RSPB Sherwood Forest on a lovely sunny day. Members enjoyed a walk through the forest, meeting Robin Hood – who happens to be a u3a member!

After the beacon transfer members took a few moments to reflect on the life of Her Majesty Elizabeth II, during which Alex read a poem she had composed celebrating the Monarch’s life. Dukeries u3a was welcomed by Mansfield u3a on Tuesday 20th September, when the beacon continued its journey.

This beacon and others which had been making their way throughout the county came together at Highfields Park in Nottingham on Saturday 24th September for a splendid celebration. The Lord Mayor of Nottingham attended and was inspired to join in the surprise ‘flash mob’ dance which had been choreographed by Dukeries u3a member Janice.

In November, members will learn more about their nominated charity, the Lincs and Notts Air Ambulance, at their monthly meeting. The speaker programme for 2023 is now set with varied topics including health, travel, local history, sporting legends and humour. Please visit www.u3asites.org.uk/dukeries/welcome for further details.

New activity groups are proving popular. The History group enjoyed talks on Sir Isaac Newton and Lady Margaret Cavendish, 1st Duchess of Newcastle. Visits to the National Holocaust Museum in Laxton and The Slave Museum in Liverpool are being planned. For those who enjoy a bit of physical activity (not too strenuous!) then Soft Tennis has proved to be the ideal exercise. A great way to socialise is with the Sunday and Tuesday lunch clubs. Recently they appreciated lovely meals at The Lion, Farnsfield and The Little John at Ravenshead. Social evenings are starting with members donning their thinking caps in November ready for a quiz and supper.

The first week in October was ‘Libraries Week’ and Dukeries u3a was welcomed by Edwinstowe Library to introduce the group to library users who were very interested in the benefits of membership. The u3a motto is ‘Learn, Laugh, Live’ which accords well with the ethos of the library service.

Dukeries u3a is one of the smaller u3a groups in Nottinghamshire and prides itself on its warm welcome to new and existing members. The group boasts over 140 members drawn from Ollerton, Edwinstowe and the surrounding villages. During the month there is a varied calendar of 17 activity and interest groups. Members also meet every month to hear a guest speaker on a matter of interest and to socialise. In addition, a special event and travel calendar is being planned for the coming months.

If you have an interest you would like to learn more about, or share with others, while making new friends and socialising safely, Dukeries u3a may be for you. Annual membership subscriptions up to 31st March 2023 are now available for £19.00. Members of other local u3as are welcome to join as associates for £10.00. You can join online via the website or in person at a monthly members’ meeting, which takes place at the Jubilee Hall, Wellow Road, Ollerton on the third Monday starting at 12.30pm.