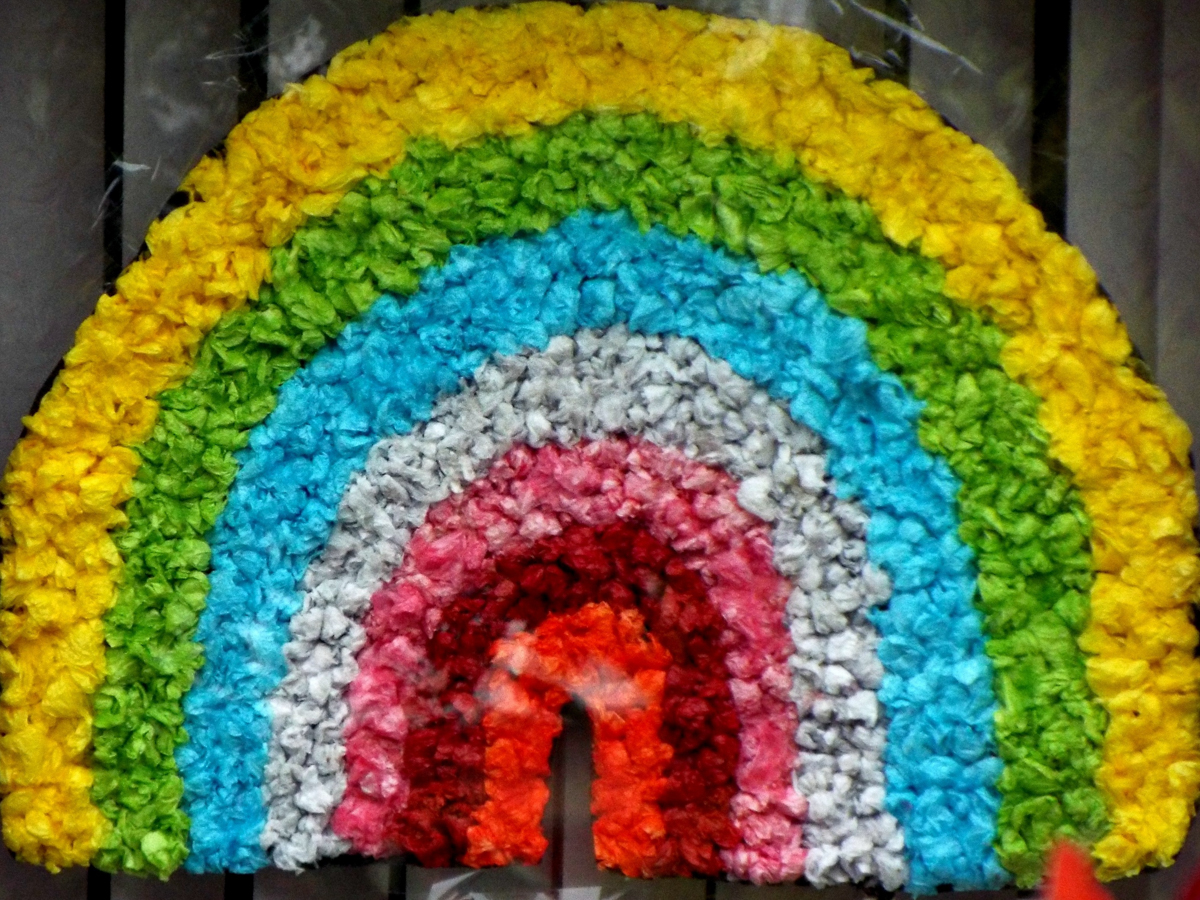 If, sometime in the future, anyone should ask what I did in the lockdown I’ll have my answer ready. I collected art, or to be precise, photographs of it to make a poster.

The idea was sown by Her Majesty the Queen when she alluded to ‘rainbows drawn by children (as) symbols of hope’ during the current COVID-19 pandemic in her Easter speech. I had already noticed their appearance in house windows and indeed our grandsons had delivered one to us the previous day. But it was only when I observed a chap down the street spending a sunny Saturday afternoon painting an enormous one on his garage door that I realised something extraordinary was happening which should be documented. I resolved to tour the estate during my daily exercise period photographing as much of the artwork as possible to make a collage in the form of a poster which I would sell to raise funds for the NHS charity. Okay I’m no Captain Tom but I’d like to think we were quarried from the same Millstone Grit.

Now I can understand why someone prowling about photographing house windows maybe a cause for suspicion, especially at properties with children, so I asked my wife to put a post on the Woodlaithes Facebook page explaining what I was about and she received 61 responses, all of which were positive. Indeed, some advised where the best examples were to be found. But the most helpful was from the owner of a printing company offering his services. I couldn’t believe my luck!

Encouraged by this support I stepped out next morning and went to work. By lunchtime I’d collected three dozen examples within a 300m radius of home and been amazed by the quantity and quality of the exhibits. While the rainbows obviously drawn by children were predominant, no two were the same and they certainly did not correspond to the colours of the spectrum I’d learnt in school (Richard of York, etc). One of the best was in a psychedelic style and reminded me of the cover of my favourite Cream album back in the sixties. Whilst the majority were executed on paper in crayon, paint or felt tip some had been painted directly onto the glass and there were even some executed in crochet and rug work. There are obviously some very creative people on this estate and I suddenly saw my fellow residents in a new light.

Returning to the more basic ones done by children, I found myself drawn to the personalised ones even where they had simply shown the pride to sign their name. Thomas had obviously just learned to write but could justifiably be proud of his work and as for Grandma, who’d been given her very own rainbow with a heart and wish to stay safe, how comforted must she feel to have such a reminder of her grandchild during her isolation.

Not all the art was displayed in windows. One of the most appealing pieces was held by a huge Teddy sitting outside a front door. I mean, who can resist a bear? Much of the art paid tribute to the NHS, and rightly so, but other key workers were not forgotten as I noticed a couple dedicated to the posties and one to the bin men.

When normality, or something resembling it, returns as it eventually must the artwork will inevitably disappear like blossom on the breeze but we will surely all remember this Spring Lockdown when rainbows appeared in every street.

Get your own poster

If you would like a poster you can contact mbritton2@aol.com. He will deliver within a one mile radius of Woodlaithes or can send by post for £15.00.