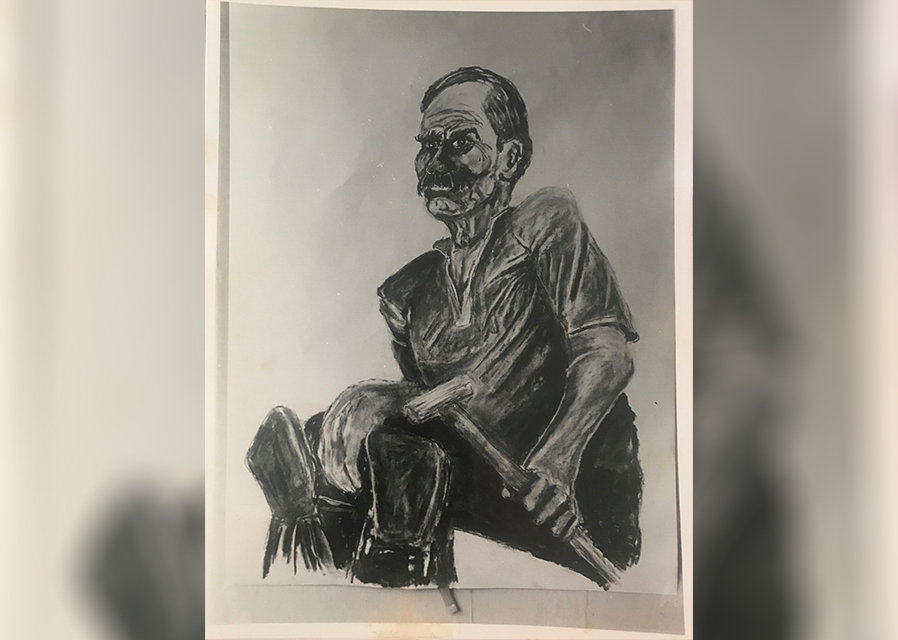 Story of the Ashington Group, also known as the Pitmen Painters, is very well known. They produced hundreds of paintings showing what life was like both above and below ground for their mining communities in Northumberland.
In the 1980s an artist became prominent in our own area for his huge life-size, charcoal drawings also depicting life in the collieries. This was our own ‘Pitman Painter’, David Brennan.
He was inspired after meeting up with artist Paul Butler, who was most famous for his huge mural in London celebrating the Battle of Cable Street, and who was participating in a fellowship at Maltby Main Colliery. This was part of a project funded by Yorkshire Arts Council named Six Artists in Industry.
Dave’s art blossomed under the tutorship of Paul Butler. He excelled from a cartoonist with various mining newspapers to a serious artist. Dave was soon picking up accolades and had his work exhibited around the UK. His portrayals of mining, both modern and past, became the focus of media attention and his exhibition in his native Scotland was featured by BBC Scotland in the mid-80s.
David’s work was hung in many public spaces such as Rotherham General Hospital, local museums and schools. These were often gifted to the public by David. Most of our ‘Pitman Painter’s’ work is in private hands but some can still be viewed in his adopted home in Maltby. Five large pieces are found on public display. Two in the Edward Dunn Memorial building (home to Maltby Town Council), a life size charcoal of a monk and a miner can be viewed in the Wesley Centre on Blyth Road, Maltby. A final piece (in paint) can be seen at Maltby Crags School. The latter formed part of celebrations of Maltby Main Colliery and was rescued from buildings after the mine closed in 2013.
His work was particularly revered for his use of charcoal and the depiction of life in the coal mines. Having worked since the age of 15 both in Alloa’s collieries and Maltby Main Colliery, Dave drew on his own experiences of the toil and hardwork of mining. He is particularly noted for capturing the realities of life in the mines. His work features child labourers, the pit ponies and coal hewers as well as capturing in detail the subterranean world.
Dave has been busy working on smaller scale art nowadays and he produced many new pieces for the book Haggis and Yorkshire Pudding – a book recounting the lives of the transferred Scottish miners and their families in Maltby – which he also co-authored.