One aspect of UK wildlife watching that is often overlooked is the fact that our location and temperate weather results in huge seasonal changes in what wildlife we can see. One of the biggest drivers of this change is bird migration and summer delights include opportunities to see swifts, swallows and martins flying overhead or to hear the song of a range of migrant warblers.

One summer migrant you are sadly less likely to see or hear is the turtle dove. Smaller and much more colourful than collared doves, they have a blue-grey head, pink chest, an orangey-brown and black patterned back and three or four black and white stripes on the side of the neck. Their purring ‘turrr turrr turr’ song is quite different from the familiar, and some would say interminable, ‘hoo hoooo-hoo’ of the collared dove. 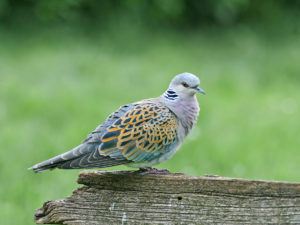 Summer here in the UK is much more hospitable and conducive to breeding success than the conditions in Sub-Saharan Africa, but the birds’ annual treks to our shores are becoming less and less productive. Now agreed as the UK’s fastest declining bird species, these small pretty pigeons are sadly on the brink of extinction, having declined by as much as 98% since 1970.

Where they still occur in the UK they can be seen from April to September, which makes you wonder why they feature so prominently in the famous ’12 Days of Christmas’ song. They breed in scrub, woodland and orchards and mainly occur in the south and east where it is both warmer and drier. Adults feed on wild flower seeds as well as cereal crops, but feed their young on a regurgitated substance known as ‘pigeon milk’.

The birds’ preferred habitats and choice of food has certainly contributed to its decline. Changes in the traditional farmed landscape and in cropping cycles have limited its chance of success, with ‘weed’ seeds such as those of the fumitory and other wild flower seeds scarce. Added to these changes are the impact of many thousands being shot each year as they pass through France, Spain and Morocco and over the island of Malta whilst on their epic 5,000km journeys to and from Africa and on arrival back in their wintering areas in Senegal. 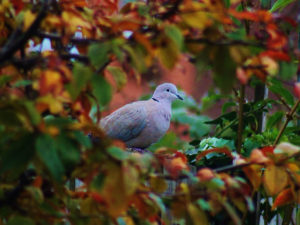 The turtle dove is now listed as vulnerable on the global IUCN Red List of Threatened Species and there is a real danger that without urgent action we could lose the bird as a breeding species in the UK.
We are very lucky that our Idle Valley Nature Reserve near Retford remains one of the only remaining breeding sites for turtle doves in Nottinghamshire. We are currently working on plans to boost the birds’ chances of breeding success by creating new feeding areas to provide access to seeds of plants from April to August. This work is supported by Severn Trent Water and forms part of a wider programme to encourage biodiversity on a number of local sites including local farms.

Hopefully our efforts and those of other conservation charities and other landowners will mean that the turtle dove doesn’t become a species we remember purely because it is featured in a Christmas song.

You can support our work on nature reserves and with other landowners by becoming a member today. Our website is also full of ideas and inspiration to help you support wildlife in your garden or neighbourhood – for further details, including how to visit Idle Valley Nature Reserve visit www.nottinghamshirewildlife.org.