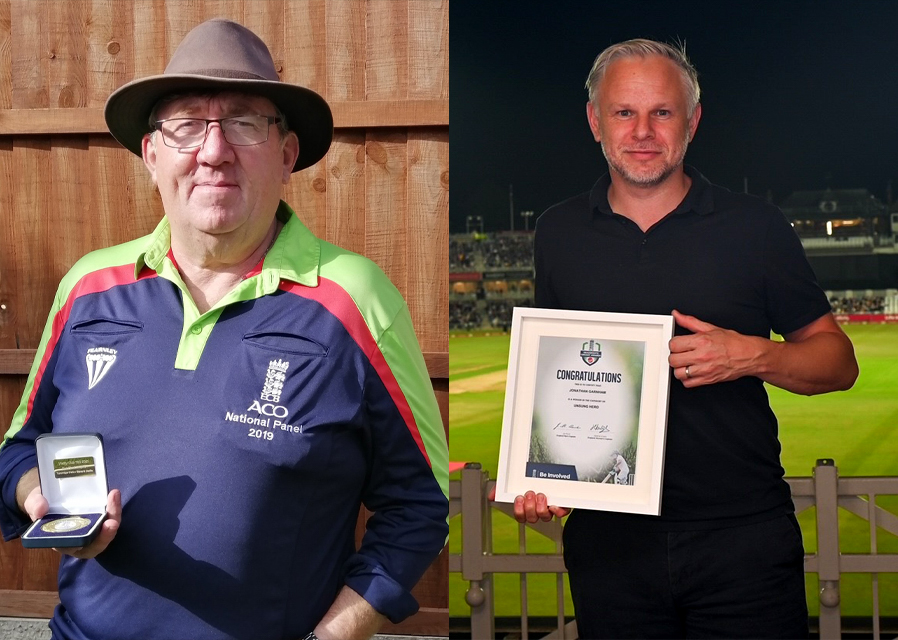 Two Edwinstowe Cricket Club members have received recognition from county and national organisations. Jon Garnham was awarded ‘Grassroots Cricket Award 2021 (Nottinghamshire)’ in the category ‘Unsung Hero’, and Ian Rich was appointed to umpire the final of a national competition.
Jon was recognised for his work in turning around the Club’s fortunes over the last few years and creating one of the leading county clubs for junior cricket. Starting only a few years ago with 20 young children taking part in the ECB All Stars programme, the Club has now expanded to include ECB Dynamos, under-11s and under-13s in the local Bassetlaw and District Junior League and has plans to expand even further. Jon’s reward was an invite to the hospitality suite at Trent Bridge on the night of the T20 quarter final against Hampshire and his name now goes forward to the national Grassroots Awards to be held at Lord’s Cricket Ground.
After playing over 30 years for the Club, Ian stood down 12 years ago and took up umpiring, initially in the Bassetlaw and District Cricket League and Mansfield League. Through training and tutoring he progressed to county age group matches and on to the Nottinghamshire Premier League panel of umpires. He has since joined the National Panel which appoints him to county second-11 and national counties matches. At the beginning of September he had the honour of being appointed to the ECB Vitality Club T20 Final between Barnard Castle Cricket Club and Tunbridge Wells Cricket Club, played at Northamptonshire County Cricket Club. A very close game eventually saw Tunbridge Wells Cricket Club the winners by five wickets. He continues to be involved with the Club but also has regional roles in umpire education and development.