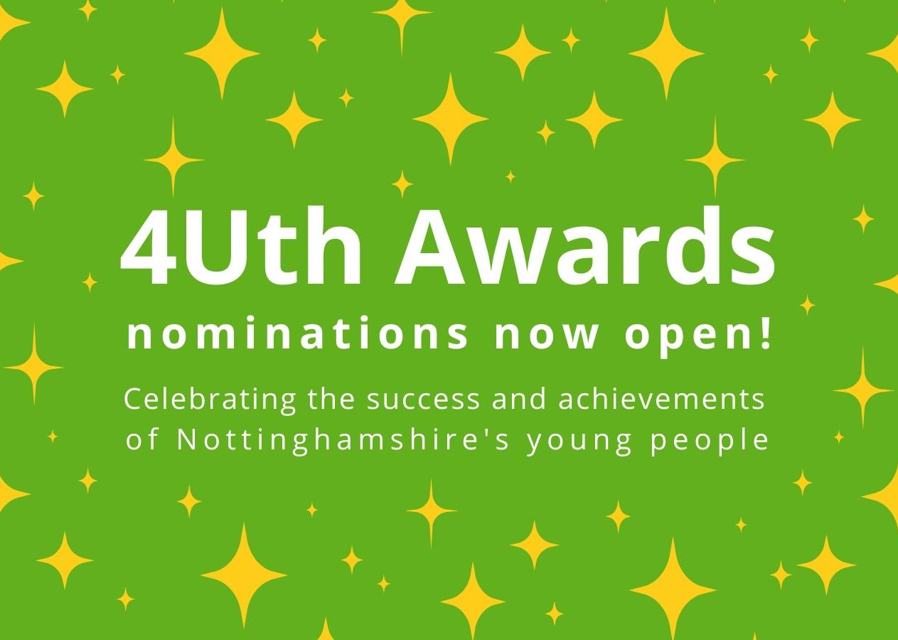 Time to celebrate the achievements of Notts young people!

The search has begun for Nottinghamshire’s inspirational young people as the 4Uth Award nominations are now open.
The 4Uth Awards seek to recognise the achievements of young people aged 11 to 19 (or up to 25 if disabled) from all seven districts of the county. Previous winners have often overcome major challenges in their lives, such as bereavement, trauma and illness, and have raised thousands for charity, cared for friends or relatives, and helped others.

Nottinghamshire County Council is now looking for its next set of nominations for the amazing young people across the county.

Councillor Tracey Taylor, Chairman for the Children and Young People’s Committee said: “The 4Uth Awards are a fantastic way for us to see some really wonderful achievements from young people across Nottinghamshire and celebrate those achievements with them.
“There are young people out there right now making a real difference in other people’s lives, or overcoming significant hurdles of their own, and it’s only right that we recognise them in some way.
“If you know an inspirational young person who deserves to be recognised, then we want to hear from you!”

The deadline for applications is 21st June and finalists will be invited to a special presentation evening in the autumn where an overall winner will be announced.

The actual presentation of the trophy for the overall winner garners excitement each year as more and more elaborate ways are thought up for the delivery method of the trophy, with past deliveries being by boat and by plane, and a film-trailer-style video is shown at the awards ceremony depicting just that!

Full details of eligibility and how to send in nominations are at www.nottinghamshire.gov.uk/4uth.