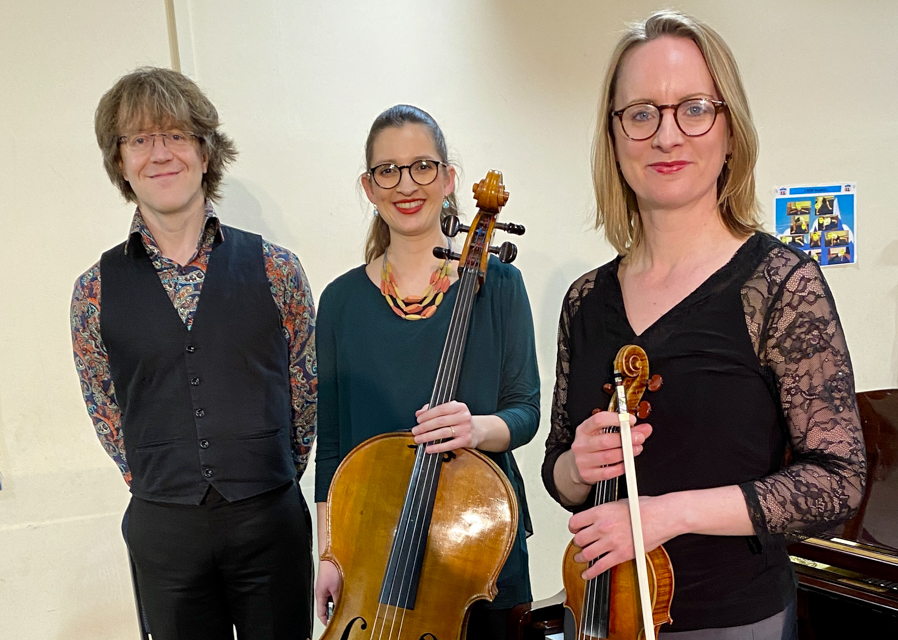 Tickhill Music Society members enjoyed the final two concerts of their season in March and April and we have these reviews from Adrian Hattrell:

The RautioTrio (violin, cello and piano) made their long-awaited appearance at Tickhill Music Society on 4th March, after previous bookings had been postponed on account of coronavirus. Everyone agreed that they were well worth waiting for – they presented a fascinating programme of works by familiar composers at varying stages of their careers.

Youth was represented by the 22-year-old Beethoven and the 18-year-old Rachmaninoff. The former seemed to be challenging himself to create something monumental out of a few simple notes, and the work of the latter was given added poignancy when it was introduced by the leader of the trio, Jan Rautio – born in Russia but brought up in England – who dedicated the performance to his Ukrainian great-grandmother.

For many in the audience the highlight of the evening was the trio by Mozart which he wrote when at the height of his powers following the success of the Marriage of Figaro. The Rautio Trio was equal to the challenge and displayed faultless ensemble work – the result of many years playing together.

The programme closed in fitting manner with a work written by Fauré in the twilight of his career, bringing to an end a performance that was both faultless and engaging.

My copy of the Oxford Companion to Music says of the harp: “ there is record of it, in some form, in every age of human history and in every place inhabited by men or spirits – except Hell”. Thankfully at Tickhill Music Society’s recent concert the audience were transported to heaven by the harpist Angelina Egerton, who not only gave a bravura performance but was also happy to spend time explaining the construction and operation of the instrument.

The harp is rarely encountered as a solo instrument – Angelina was only the second harpist in 44 years to appear at the Music Society – but it is not alone in being constructed of strings stretched on a frame which are plucked and modulated by pedals – but somehow the piano always seizes the limelight.

Angelina mined a rich vein of music in compiling her programme – from Bach to Debussy via Pachelbel and Puccini – together with pieces by the harpist to Queen Victoria, and by her contemporaries at the Royal Northern College of Music. Along the way there was some jazz and songs from the shows.

It was a truly versatile and charming performance – the only regret is that the audience will now have to wait until 16th September for the start of the next season of music with the Doncaster Youth Jazz Orchestra.