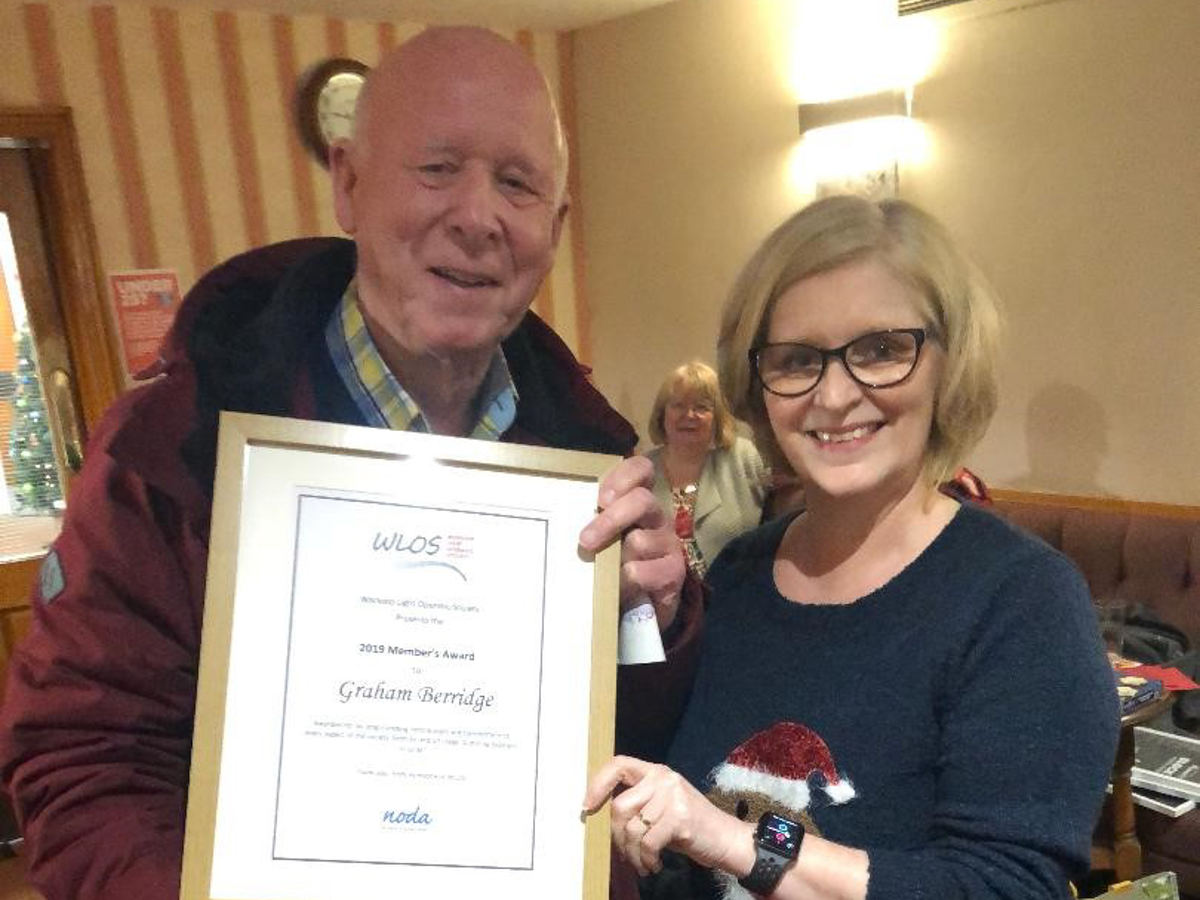 At the last meeting of the Worksop Light Operatic Society before their Christmas break, two long-standing members were presented with special awards. The first of these was a certificate awarding life membership of the society to Debbie Savill, Society Treasurer. One of the founding members of the society when it was formed in 1973, Debbie has served as treasurer and committee member ever since. She has also played many parts on stage, both in the chorus and in varied principal roles. These have included Susan in ‘The Desert Song’ in 1975, Bloody Mary in ‘South Pacific’ in 1984, Widow Corney in ‘Oliver!’ in 1992, Frau Schmidt, the housekeeper, in ‘The Sound of Music’ in 2014 and half a cow in too many pantomimes to mention! More recently she has acted as Property Mistress, responsible for sourcing and managing props for a variety of shows. On behalf of the society, the secretary stated: “Debbie has become only the fifth person to be given a life membership, to mark the outstanding work she has done for the Society for the past 46 years.”

The second award to be presented was the annual members’ award, given to the society member nominated by other members for his or her contribution to the society’s success during the previous year. This certificate was presented to Graham Berridge, a society member since 2004. Graham has taken part in every production since then, either in the chorus or supporting roles. His most recent appearance was as Captain Brackett in the May 2019 production of ‘South Pacific’. When presenting the award the Society Chairman said: “Graham is a perfect example of what a good society member should be. He never misses a rehearsal, always knows his lines, and is willing to help wherever he can to support the society, both on stage and off.”

Along with the rest of the society, both Debbie and Graham are now hard at work preparing for the next Worksop Light Operatic production. This is to be ‘A Tribute to the West End’, which is to be held at the Acorn Theatre, Queen Street, Worksop from Thursday 14th to Saturday 16th May 2020. Tickets are on sale now from the Acorn Box Office (01909 501817) or online via www.acorntheatre.net or from any society member.

If you can’t get to the West End, go and see this popular local society bring the West End here to Worksop! Book now… don’t be disappointed.