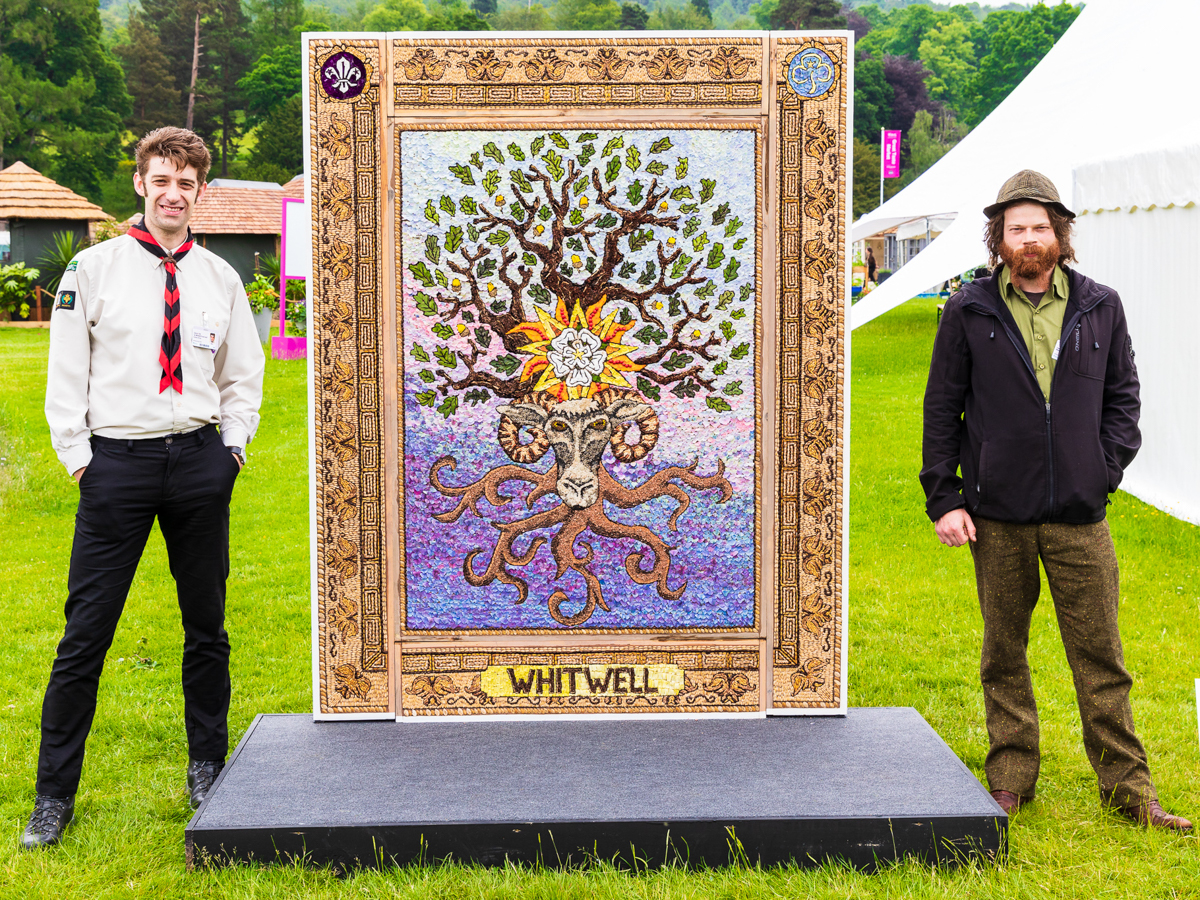 The well dressing team at Whitwell were invited to showcase their talents at the Royal Horticultural Society show in Chatsworth this year. The team, made up of members of the 1st Whitwell Scout and Guide Group, exhibited at the show.

The theme they were given was ‘There’s no place like home’ and the team got to work straight away to produce a design that reflects the villages’ position on the borders of three counties.

The design for the frame was created by Scout leader Darren Ellis from an original piece of artwork by local craftsman, and former Scout, Josef Dawes. It incorporates symbolism from Derbyshire, Nottinghamshire and South Yorkshire.
Hilary Ellis, chair of Whitwell well dressing committee and Guide leader, said: “This was a great opportunity for Whitwell to showcase something we are very proud of to a very large audience. We hope to have made an impression and encourage people to visit the village for the annual well dressing celebrations in July.”

Whitwell Well Dressing has been organised by 1st Whitwell Scouts and Guides since 1972 and is a fundraising event. It has grown into a community event and many people are involved who otherwise have little connection to the Scout and Guide Group. It is a movement of which the residents of Whitwell can feel real pride in and this is a recognition of their achievement outside of their home village. Many young people are involved in the creation of the displays each year and this achievement will be an inspiration to the young people of Whitwell, to pursue ambitions and their creativity.
The team have been encouraging locals to donate certain materials that they will need a lot of, including melon seeds which has resulted in a lot of villagers eating large quantities of the fruit! Chesterfield Royal Hospital’s cafe collected all the seeds from their melons to donate to the cause.

In the end an estimated 20,000 melon seeds, 12,000 hydrangea petals, 2kg of coffee beans and 1,000 pumpkin seeds were individually placed; amounting to over 600 hours of work finishing after midnight on the final day of creation.
Josef Dawes, artist whose design was the basis of the display “I was rather overwhelmed with the project. The time, patience and talent that has gone into it is amazing and I’m very humbled to have my base design as the influence. I am warm and humbled.”

The annual Whitwell Well Dressing will be on display from Saturday 7th July. This year’s displays will be commemorating the centenary of the end of World War I and the suffragette movement. Everyone is encouraged to take part or visit the making of our annual displays at Whitwell Scout and Guide headquarters every evening from Monday 2nd July.

On 7th July, there will also be a parade with the Scouts and Guides through the village. This parade includes the blessing of the wells and a performance by Whitwell Community Choir. After the parade there is a craft fair and cream teas at Whitwell Community Centre.

Find out more at www.facebook.com/whitwellwelldressing