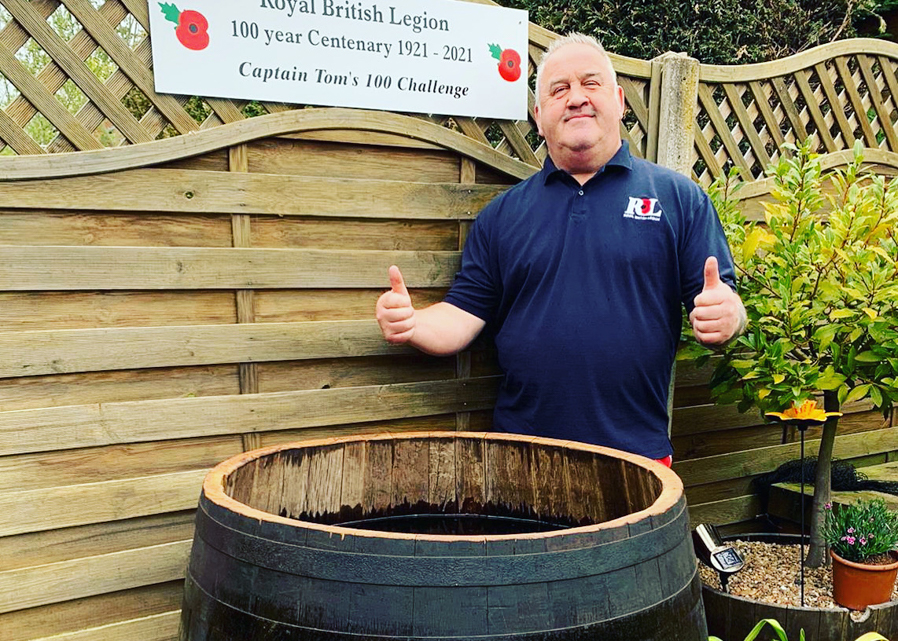 Army veteran plans his own 100 Challenge

Worksop’s Mark Walker is hoping to raise thousands of pounds for the Royal British Legion with his very own version of Captain Tom’s 100 Challenge. He started on 1st May and has committed to complete three 100 challenges – 100 days without alcohol, 100 days of exercise (this is not easy due to the injuries he sustained in the army) and finally 100 daily dips into an ice tub for 100 seconds.
He has already beaten his original fundraising target and over £3,000 had been pledged two weeks into his challenge.
“I was so inspired by Captain Tom during lockdown and the effort he made and brought the county together in these difficult times,” he said.
“He raised an amazing amount of money by walking daily and uplifted many people during the lockdown period.
“The Royal British Legion means a lot to me, having served my country for 13 years in the British Army in the Royal Corp Transport. It helps thousands of retired and serving military personnel and their families at home and abroad.
“On 15th May 2021, the Royal British Legion celebrated its centenary so I thought it would be fitting to choose this as my chosen charity for my Captain Tom 100 challenge.
“As a result of injuries sustained during my service, in 1993 with much regret I had to leave Her Majesty’s Armed Forces. Despite leaving the forces the Army has and always will be a big part of my life, I have friends for life and a bond with those I served with that never breaks. “
Mark’s main sponsor is Carlton Forest Group and his close friend Diane Ward, and he has also received help from A1 Barrells, (Tom and Jim), The Beard family at DB Signs and Associates, Morrisons and Sainsburys. Thanks also go to J Howarth for supplying ice.
If you’d like to support Mark too, you can donate via his JustGiving page – www.justgiving.com/fundraising/Mark-Walker120.
He added: “My challenge started on 1st May 2021, the weekend which would have been Captain Tom’s birthday when the whole country got together to do his 100 challenge.
“I would like to thank two good friends of mine, Roger Spacey and Alastair Plant, who stepped in for me during my second week when I was too ill to carry out the challenge. My wife, family and friends have been a constant support to me and ridicule me every time I take a dip! Not one offering to do it for me!
“Anyone who would like to donate ice please contact me on 07713 138895.”
Meet Mark as he completes his challenges in front of a live audience on Saturday 31st July in Worksop town centre. Anyone wishing to join the challenge on the day can do so after donating to his JustGiving page.
Mark’s last dip will be on 8th August.