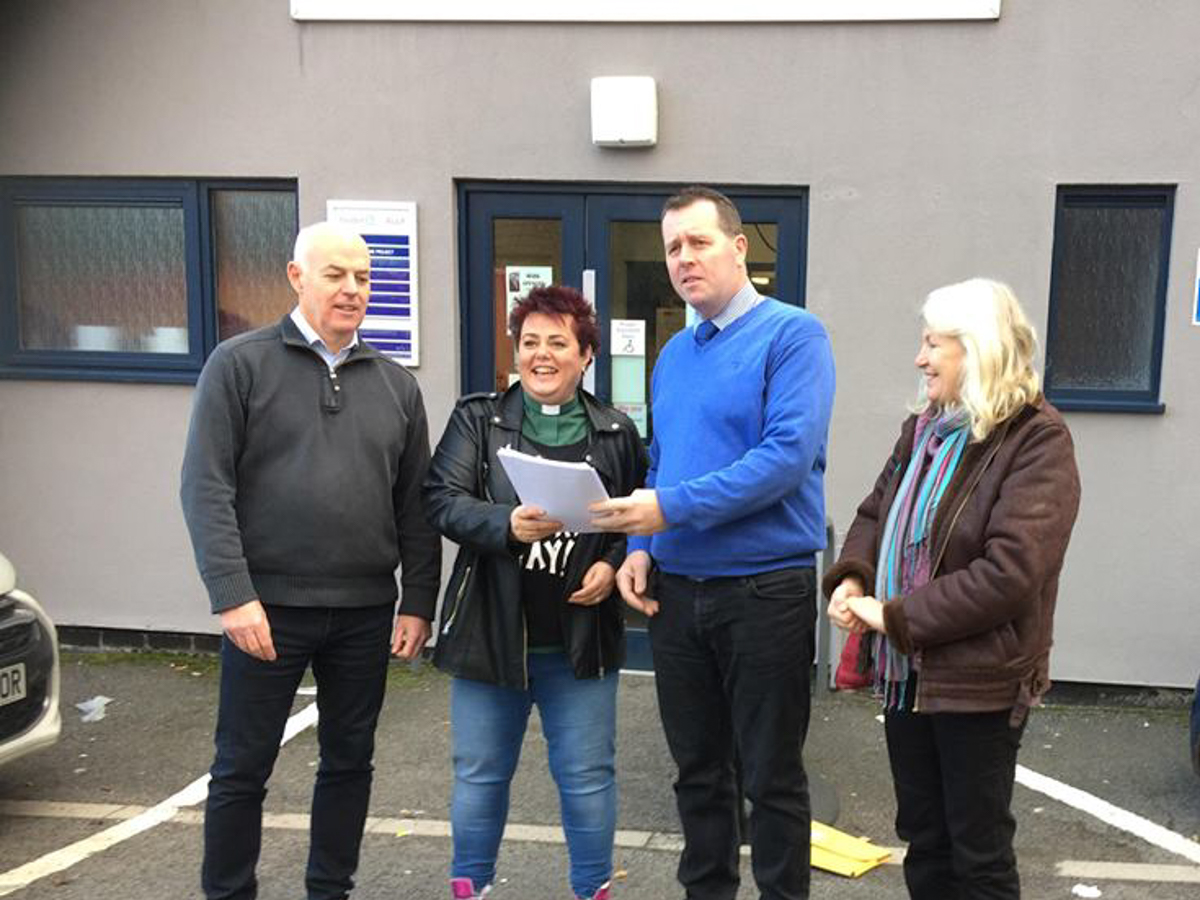 Local MP Mark Spencer was handed a petition at 11.00am on 14th December 2018, by the Reverend Deborah Hodson containing 3,030 signatures. These signatures were collected over the past year from people who are concerned about the very real possibility of fracking in this area, and about the Government proposals to expedite this industry by making exploratory drilling a permitted development and part of the NSIP regime.

The statement on the petition explained the main concerns and the possible impact of fracking in this area. People who supported the following statement were asked to sign the petition: “We the undersigned agree that Sherwood and Edwinstowe should be kept a Frack Free Zone”.

The signatures on the petition were collected by members of Frack Free Sherwood Forest and Edwinstowe, and most were collected in Sherwood Forest itself. It includes signatures from tourists, who told the group they visit Sherwood Forest every year and were horrified that fracking could even be contemplated in an area of such natural beauty. A number of people who signed the petition live in USA states and countries which originally embraced fracking and who now have banned it. They were anxious to stress that the group needs to do everything they can to stop fracking getting a foothold over here.

Sherwood Forest is an international tourist attraction and in January 2017 Friends of the Earth and Frack Free representatives handed over an online petition of 250,000 signatures, calling for Sherwood Forest to be saved from planned shale gas exploration to the Environment Secretary Andrea Leadsom. In October 2018, more than 300,000 people signed an online petition opposing the government’s proposal to accelerate new fracking developments.
The government proposes to classify exploratory shale drilling as ‘permitted development’, a planning category originally designed for sheds and minor home improvements. If these changes go ahead, fracking companies could start drilling across large parts of England without the requirement to apply for planning permission.

The Reverend Deborah Hodson from the Frack Free Group said: “We’ve seen a groundswell of local opposition to fracking and to the government’s reckless plans to fast-track fracking. If the government gets its way, fracking companies could drill at will — without even needing to apply to the council for planning permission. This would trample over our local democracy and threatens to industrialise the English countryside.”
The government’s plans have encountered widespread cross-party opposition. Many local councils have passed motions against the proposals.

Pauline Meechan from the Frack Free Group said: “We’re facing a climate emergency. Instead of making it easier for fracking companies to drill in search of fossil fuels, we need to invest in renewable energy. This would help the climate, promote energy security and create more jobs.”

Fracking has already been stopped in Scotland, Wales and Northern Ireland, also in Ireland, France, and the Netherlands. Many more countries worldwide have adopted a ban. In Australia and a number of USA states that formerly allowed fracking a ban has been imposed on any future drilling.