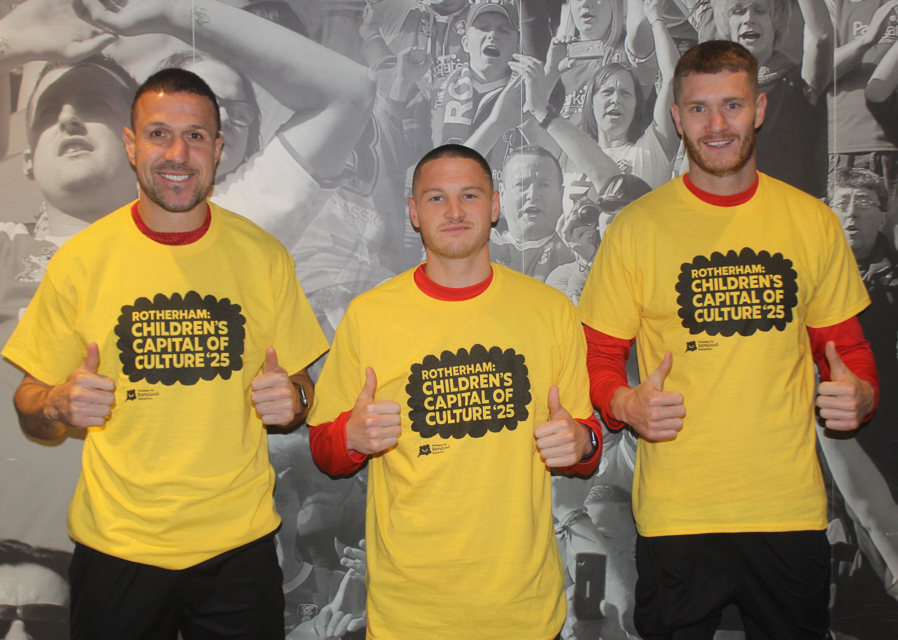 Rotherham United has pledged its support to Rotherham becoming the world’s first Children’s Capital of Culture (CCoC) in 2025, with players hailing the move as an ‘exciting new chapter for Rotherham’.

Demonstrating a commitment to children and young people in Rotherham, the borough has announced it will become CCoC in 2025, creating a landmark year where it will showcase itself to the world like never before.

The journey officially launched in February this year, giving people a taste of what’s to come in 2025 and showing Rotherham as a cultural destination and home to a hive of creative talent.

Richard Wood, captain of Rotherham United, explained: “Just as our team has been promoted, so has Rotherham as a town. It feels like we’re gaining real momentum and being CCoC provides a platform to really make a difference to Rotherham’s future and ensure it’s recognised for its vast potential. We’re passionate about Rotherham and its people, and bringing our communities together for 2025 will be an incredible experience.”

Julie Dalton, Chair of the CCoC Programme Board and managing director of Gulliver’s Theme Park Resorts which includes Gulliver’s Valley in Rotherham, added: “Rotherham United’s support means so much to us. Their charitable work and passion for widening participation is inspirational and we are proud to have their backing.

“We have learnt so much more about Rotherham since starting work on the CCoC programme, and we’re seeing so many opportunities to bring about the transformation we need to reach our full potential as a borough. The programme is aimed at bringing the town together, embracing the world of creators, children and young people. Advantages won’t jus t be seen by cultural attractions, but residents and businesses across Rotherham.

“We held an incredible Arts Fest event at Gulliver’s Valley in May, involving over 1,700 local school children, and it was wonderful to see those who attended enjoy being immersed in art and creativity and the benefits they got from it. We know there is so much more like this coming up in the months and years ahead for the whole town to get excited about.”

As part of this year’s CCoC launch programme, which has been created and designed by children and young people, a host of family-friendly events have hit Rotherham including the Arts Fest at Gulliver’s Valley, the first ever skate and art festival, pop-up exhibitions, graffiti and poetry workshops, and open mic nights.

The football team is lending its support to the programme alongside a diverse group of ambassadors, including visual artist Jo Peel, educator and sportsperson Dana Abdulkarim, Radio Sheffield presenter, Sile Sabanda, and senior member of the UK Youth Parliament, Amaan Ali Saqlain.

More Children’s Capital of Culture events on the way

Rotherham United Exhibition, New York Stadium, from July
A new pop-up museum will be unveiled on the football grounds, with video stories, interactive displays and artefects dedicated to the history of Rotherham United. Celebrate the team, female football players, and Arthur Wharton – the first black professional football player, who began his career in Rotherham. The launch will see children and young people from schools and community groups around Rotherham come together to perform a 32-step dance routine in honour of Arthur Wharton. For information visit www.themillers.co.uk.

Kaleider Sculpture, Clifton Park, July
A dramatic public sculpture will appear in Rotherham overnight, changing familiar spaces and bringing wonder and joy, while asking questions about who we are and our place in the world. Visitors will also have the chance to get hands-on with free, drop-in craft workshops. This breath-taking installation has been designed by international production studio Kaleider in collaboration with a group of trainee Creative Producers from Rotherham aged 16 to 25. Check the Children’s Capital of Culture Facebook page for updates.

Bronze Arts Award, Rotherham Civic Theatre, 26th to 29th July, 10.00am to 3.30pm
This summer, Children’s Capital of Culture is giving young people aged 12 to 16 the chance to take part in a four-day workshop aimed at achieving their Bronze Arts Award, a nationally-recognised Level 1 qualification. The young people will be supported every step of the way by experienced creative professionals, who will help them develop confidence and creativity while building their knowledge of different opportunities within the arts and cultural sector.

Young people will get to have a go at a range of different arts activities, including music, visual arts, and creative writing. They will also be given the time and support needed to explore their own artistic interests – whether they’re into singing or scriptwriting, dance or drama, film or photography, or anything else creative! The workshop programme is free to take part in, but places must be booked in advance at www.eventbrite.co.uk/o/childrens-capital-of-culture-43963141773.
For more information, visit www.rotherham2025.com/hello.