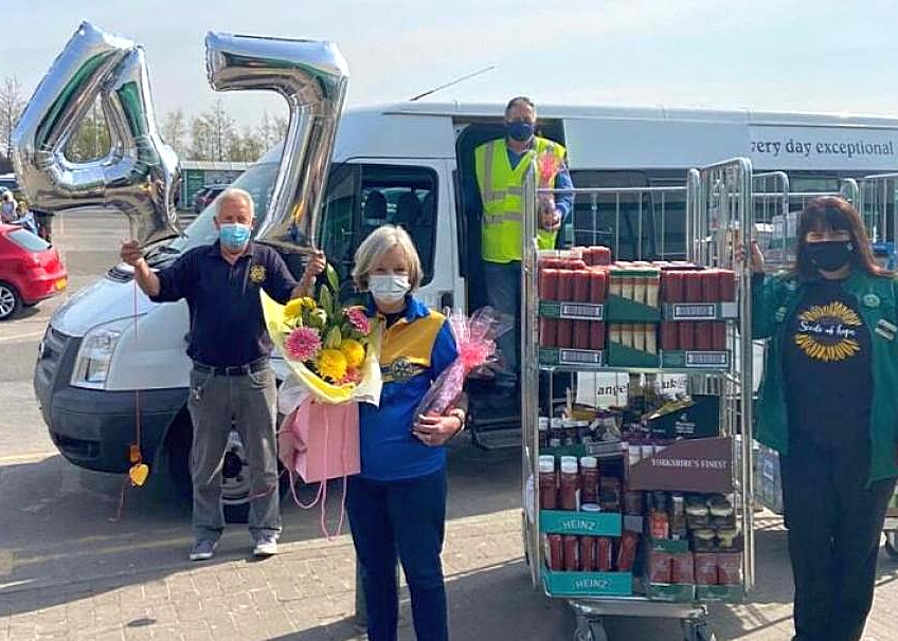 April has been a month of both sadness and of celebration for Rotherham Sitwell Rotary Club. It is with profound sadness they report that Rotarian Shaun Doherty passed away on 8th April. Shaun was a much loved and highly respected member of the club and he will be a great loss. He joined Rotherham Sitwell Rotary almost 27 years ago, serving as president in 2007-08. Shaun was always one of the first to volunteer, one of the first to give and was unfailingly interested in and respectful of his fellow Rotarians. His fellow members all have their favourite memories and tales to tell and Shaun’s amazing musical talent has enriched many a social gathering. He gave so much and they will not forget.
It was a great pleasure to induct new Rotarian Martin Davis on 1st April and the club all welcome him. On the same evening, they were treated to their own version of Desert Island Discs. It was a really moving experience to hear a wide range of music and the reasons for people’s choices.
Two weeks later, they had another treat with a presentation from Oliver Green entitled ‘A mining engineer in London’. It was fascinating from beginning to end and the complexity of the project was mind blowing. It certainly gave a better understanding of why major engineering projects are so costly.
The quiz team did the club proud in the District Quiz, coming seventh in a field of 15 and only 11 points behind the winners. A big thank you to all involved.
Yet more good news. The last week of April was World Immunisation Week, raising awareness of the power of vaccinations. With today’s level of worldwide travel, vaccines are one of the best tools we have against the spread of disease. Rotary is yet again at the forefront of the fight against disease, in particular in Zambia with the battle against Malaria. It was therefore very timely when the University of Oxford team announced that a vaccine against Malaria had proved 77% effective.
Week commencing 19th April was an important milestone in the club’s response to the pandemic. The week marked one year since Rotherham Sitwell Rotarians started their weekly foodbank run. Each Tuesday they have been a familiar sight outside Morrisons, Parkgate collecting food for various Rotherham foodbanks.
The project has been funded in the main by donations from Rotherham Sitwell Rotarians donating the money they would normally have spent at their weekly meetings, and by the generosity of Morrisons. They are also grateful to Rotherham Rotary who have given generously, Rotherham Round Table, Rotary4Food and members of the public for their support. In total, they have been able to deliver £47,000 worth of food for those in need in our town during this exceptionally difficult period.
Much of the food has gone to Rotherham Foodbank on Grove Road but they have also been able to support Rotherham Minster Social Supermarket, the Unity Centre and the Lighthouse. Together with Rotherham Rotary, they secured a £5,000 grant from South Yorkshire Community Fund to enhance the work of Full Life Church Foodbank, Harthill and Thorp COVID-19 Volunteer Support, Liberty Church Masbrough, Rotherham Foodbank, Rotherham Salvation Army and The Minster Social Supermarket.
Some of the club’s forthcoming meetings are: