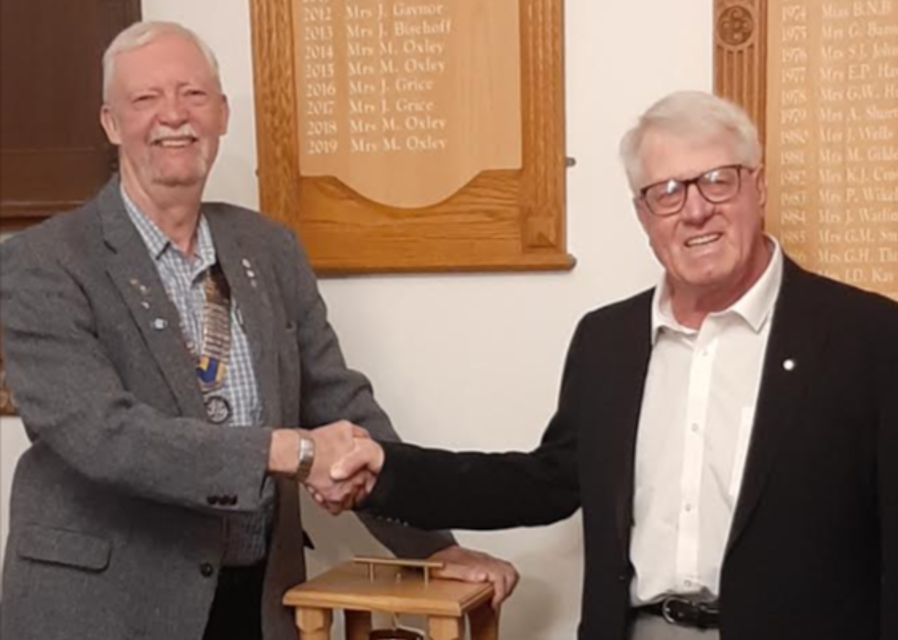 March started with the Rotherham Real Ale and Music Festival and for Rotherham Sitwell Rotary Club with a social meeting in the Chantry Boardwalk bar. Many thanks to members from both Rotherham clubs for volunteering to staff the bar at Magna.

On 10th March the club had an excellent speaker from Grimm and Co. It is a must-see venue for young and old, especially when it is fully open at its new premises at the old Talbot Lane Church. Then on Friday 11th March a small party of Rotarians together with partners went to the Civic Theatre to see ‘Curtains’ performed by Maltby Musical Theatre Group – and what an excellent performance it was.

On 24th March the principals of the two Rotherham colleges were unfortunately unable to attend as planned but instead, at short notice, retired geography and history teacher Tony Dodsworth gave a talk about ‘Aspects of Rotherham’. Members were enthralled by the talk and they all look forward to part two.

Finally, on 31st March there was a full Club Business Meeting. The meeting started with the ringing of the new Bell which has now been handsomely mounted onto a in memory of Dawn Waudby, the wife of Rotarian Peter Waudby. Peter donated the bell because the old one was lost but the bulk of the ‘manufacturing’ work was done by Rotarians Trish Lister and Chris Croker. It sounded wonderful and was particularly effective in stopping the chatter and calling the meeting to order!

Rotarians heard an update on Dibas Subedi, the student in Nepal whose secondary and further education they have sponsored since 2017 through the Fishtail Fund (managed by the Rotary Clubs of Pokhara, Nepal and Dronfield).

The group’s ‘Mother Club’, Rotherham Rotary, is celebrating its 101st Charter on 19th May at Hellaby Hall and several members will be there to mark this birthday celebration.

Music in the Gardens (www.musicinthegardens.co.uk) returns in July and the Membership and Social Committee are looking to plan a visit to an event that has not run since 2019.

The Community Committee has been very busy. One young person was taken to the Rotary Youth leadership Award (RYLA) at Castleton and is preparing feedback on what she learned from the experience. The collection of old coins has finally produced £302 for the Club’s Benevolent Fund. Crossroads Charity Coffee Shop in Rotherham has received several items and will continue to accept them.

The most recent initiative is to provide support to refugees in Ukraine who have travelled to Warsaw in Poland. Roger Green established contact with the English-speaking Warsaw Wilanow Rotary and set up links with their Rotaract members which have been developed through Immediate Past Present Trish Lister. A JustGiving page (www.justgiving.com/fundraising/paul-daniels12) has been set up to generate donations. At the time of the meeting, £3,370 had been raised (with approximately another £820 to follow from Gift Aid). The first significant instalment has been transferred to Warsaw Wilanow Rotary for their Rotaract Club to support the Ukrainian women and children who have arrived in the city.

In addition to this, Morrisons donated many items to be sent to support refugees. The removals firm Appleyards Britannia, based in Hellaby, is collecting donations from a range of sources so items were moved in Martin Davis’ camper van to their storage facilities. Because clothes weren’t wanted, the ones donated by Morrisons (all new) were taken to the Rotherham Social Supermarket.

The work of the Community Committee and the International Committee is very much appreciated, especially given all the time and effort required to ensure that Rotherham Sitwell Rotary plays some part in relieving the suffering that is happening in Ukraine.