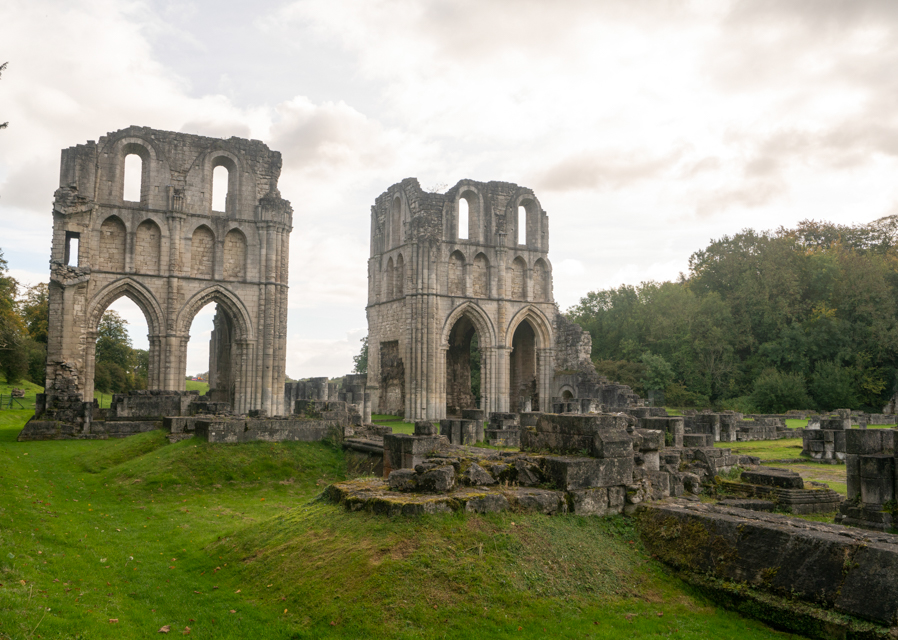 Trips out and walks associated with ruined abbeys have been popular for hundreds of years. The ruins are the remains of the many monastic communities dissolved by King Henry VIII. Roche Abbey is close by. It is set in a valley, Maltby Beck, landscaped by ‘Capability’ Brown. Its transepts, the arms of the cross shape coming off the main church area or nave, are still at their original height. Excavated foundations complete the impression of its once great size.

Roche was founded in 1147 by the Cistercian Order of monks, a branch of the Benedictines. They were famously called White Monks on account of the colour of the habits they wore. The Cistercians came to Rotherham from Newminster Abbey in Northumberland, which is now unfortunately inaccessible to visitors. Originally the land had been under the control of Richard FitzTurgis, Lord of Wickersley. Back then it was at the edge of Sherwood Forest. Once built, the Church was dedicated to the Virgin Mary. Some 60 choir monks and 115 lay brothers made Roche Abbey a bustling place of prayer and day-to-day activities at its peak.

Roche Abbey was suppressed in 1538, by which time only 14 monks remained to be pensioned off. Originally the dissolution of the monasteries was part of a more modest plan to reduce the number of smaller religious houses, such as Roche Abbey. It was part of a general Church reform process which, amongst other things, was also intended to establish more colleges for monks than monasteries. But the protestant reformation was also well underway and Henry’s well-known marriage politics played a huge part. Most local Abbots never saw it coming.

By 1539 the King of France and the Holy Roman Emperor had ended their longstanding mutual hostilities. Henry VIII now felt England and his crown were exposed to a French invasion. As a result, he needed to raise money, lots of money, to build great defences along the south coast from St Michael’s Mount in Cornwall to Lowestoft in Norfolk. That is some 650 miles, a truly enormous project. The small-scale dissolution became almost total as Abbeys were dissolved with their property sold off by the King to raise money.

Michael Sherbrook, the rector of Wickersley, watched as: “…the church was the first thing that was spoiled; then the abbot’s lodging, the dormitory and refectory, with the cloister and all the buildings around, within the abbey walls…” He added: “It would have pitied any heart to see the tearing up of the lead, the plucking up of boards and throwing down of the rafters. And when the lead was torn off and cast down into the church and the tombs in the church were all broken… and all things of value were spoiled, plucked away or utterly defaced, those who cast the lead into fodders plucked up all the seats in the choir where the monks sat when they said service…” It was a sad end but it provided a local legacy we can all still visit today.