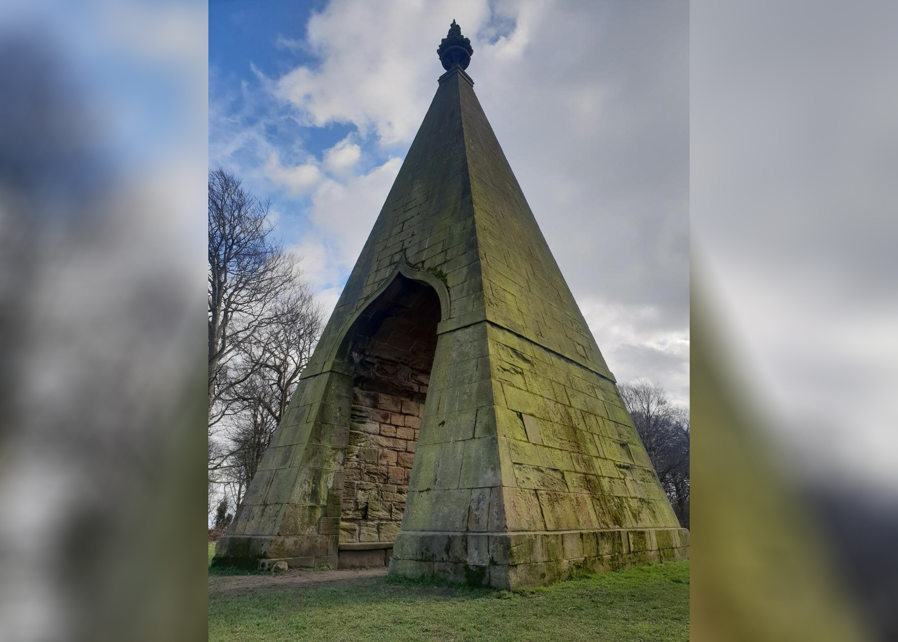 Branching off from Street Lane, not 10 minutes from Wentworth Woodhouse, lies a public trail that used to be a direct path to the mansion. On the entrance to this path lies the Needle’s Eye. It is a folly, which was a building constructed simply for decorative purpose.
Standing at 46 feet tall, with a decorative (but thankfully unused) urn perched atop it, it is a pyramid structure with arabesque engravings, a Gothic ogee archway, and made out of ashlar sandstone. Furthermore, ashlar sandstone was building material of the highest quality, telling us that this was designed to last, as well as showcase the family’s wealth.
It first appeared on a map in 1730. Given the follies took at least two years to build, and they were much larger, we could assume this was built as early as 1728. Alas, there is simply no evidence that suggests a definite year.
In regards to what events unfolded here, there is rumour that a firing squad execution took place, as there are musket ball markings on the eastern side. This could have been from Jacobite rebels. However, there is no concrete evidence of this.
As for the name, there is a local legend that it was the result of a bet by Charles Watson-Wentworth, the 2nd Marquess of Rockingham, owner of Wentworth Woodhouse and two term Prime Minister. Aside from a politician, he was also renowned for being a gambler, as he owned many horses and often bet on races. The story goes that he once wagered he could drive a coach through the eye of a needle. In order to do this, he commissioned the sandstone structure to be built on the path to the Woodhouse, called it the Needle’s Eye, and then drove a coach through the archway to win the wager. One problem arises with this, however: Charles was either unborn or one year old when this was created.
It was originally called the ‘Needle’ after its shape, and it was not until much later that it gained the name ‘Needle’s Eye’. This was because the archway was added later on, and referred to as the ‘eye’ of the needle. Furthermore, the urn on top had not yet been added by 1846, and instead it was surmounted by the coronet of an Earl at the time. Given the 5th Earl Fitzwilliam died in 1857, it is possible that the urn was placed there as a memorial to him.
Finally, given that the archway was not actually wide enough to admit a carriage, and that the name was attributed long after Charles’ death, it is improbable that it was built by Charles, but rather his father. The legend of it being a wager may have arisen from the time the 7th Earl Fitzwilliam drove a gun carriage through the archway prior to the First World War instead.
There are plenty of other follies on the Wentworth estates to explore, such as Keppel’s Column. There’s also a little stone tucked away in the undergrowth to the entrance of the Needle’s Eye, called the Vinegar Stone. Legend has it that this stone gains it name from the Black Plague in the 1600s, when it was built. People would fill the top with vinegar, and place their coins in there when purchasing goods. They believed that the vinegar would act as a disinfectant for the coins. If you’re visiting the Needle’s Eye, be sure to keep an eye out on the undergrowth!