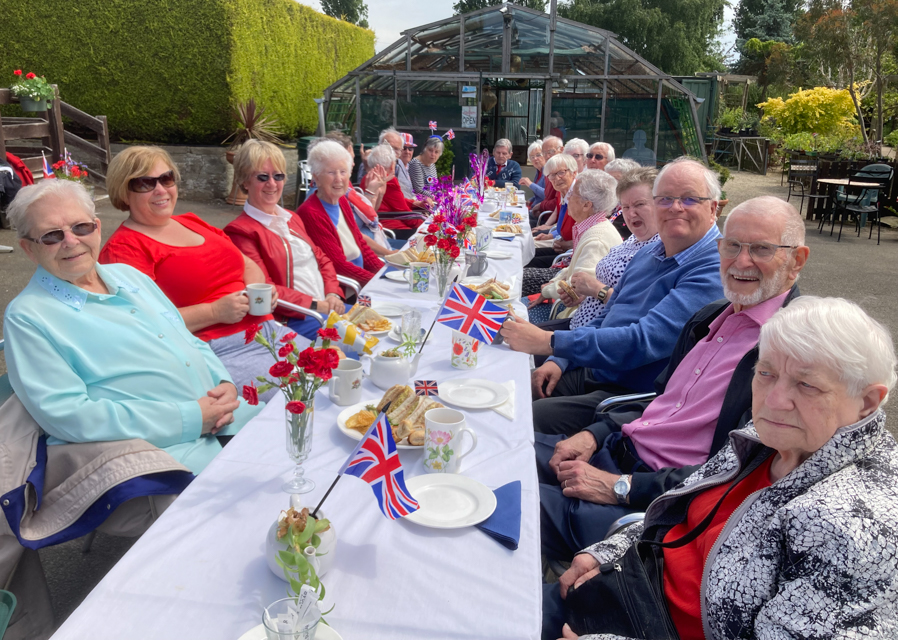 The team at Winthrop Gardens started their Platinum Jubilee events at the end of April with the launch of their book, ‘Platinum Jubilee Recipes from Winthrop’, at a very well attended event where tasters of many recipes were provided to customers. The recipes were contributed by volunteers, supporters and friends of Winthrop, with some very interesting and creative bakes – many with a royal or Jubilee theme. Favourites like Coronation Chicken and a Victoria Sandwich; a Chocolate Biscuit Cake – reputedly the Queen’s favourite; a red, white and blue patriotic Battenberg cake and a ‘Prince Albert Cake’ are just a few examples. In early May a copy was sent to the Queen with compliments and best wishes, and Winthrop is delighted to have received a reply from Her Majesty!

Denis and Inna Schevchenko attended the events with their five children. Recently arrived in Rotherham as refugees from Ukraine, Denis, Inna and the children have become firm friends of Winthrop and everyone is looking forward to helping and supporting them in any way they can in the months ahead.

Wickersley Parish Council is delighted that the Wickersley Platinum Jubilee Walkway, launched on 1st June, is one of only two such walkways curated to mark the 70-year reign of Queen Elizabeth II.

The Platinum Jubilee Walkway is 7km(4.35 miles) long, with each kilometre representing a decade of the reign of Her Majesty. The circular route, starting and finishing at Winthrop Gardens, takes in many of the key landmarks in Wickersley and is a great way to learn more about the village. The walk will take about two hours.

There is also a shorter ’Heart of the Village’ walk of 3.7km ( 2.3) miles which takes about an hour and is more suitable for those with pushchairs or mobility issues.

70 walkers marked the launch of the walkway – one for each year of the Queen’s reign – including members of the weekly walking group, Winthrop volunteers, parish councillors and local MP John Healey, as well as customers, friends and supporters of Winthrop. Walk leaflets can be collected from Winthrop or downloaded from the Wickersley Parish Council website where there is a lot more information about the walkway.

The bronze commemorative plaque will soon be permanently installed at Winthrop Gardens to mark the start and finish of the walk.

Memory Café guests enjoyed a traditional Street Party in glorious sunshine. After a great selection of party food, guests enjoyed an ‘All About the Queen’ quiz before toasting the Queen and singing the National Anthem. Parish Councillor Peter Thirlwall brought his Sooty and Sweep gloves puppets to provide some entertainment and lead the community singing.

The annual Bake Off was given a ‘Platinum Jubilee’ touch and organisers were delighted to have nearly 30 entrants to this special event – with some truly scrumptious, creative and tasty bakes! Thanks go to everyone who baked, to the judges who had such a difficult job and to all the wonderful customers and friends who helped with the tasting. A lovely community event with lots of laughter and talking! Winners are as follows: