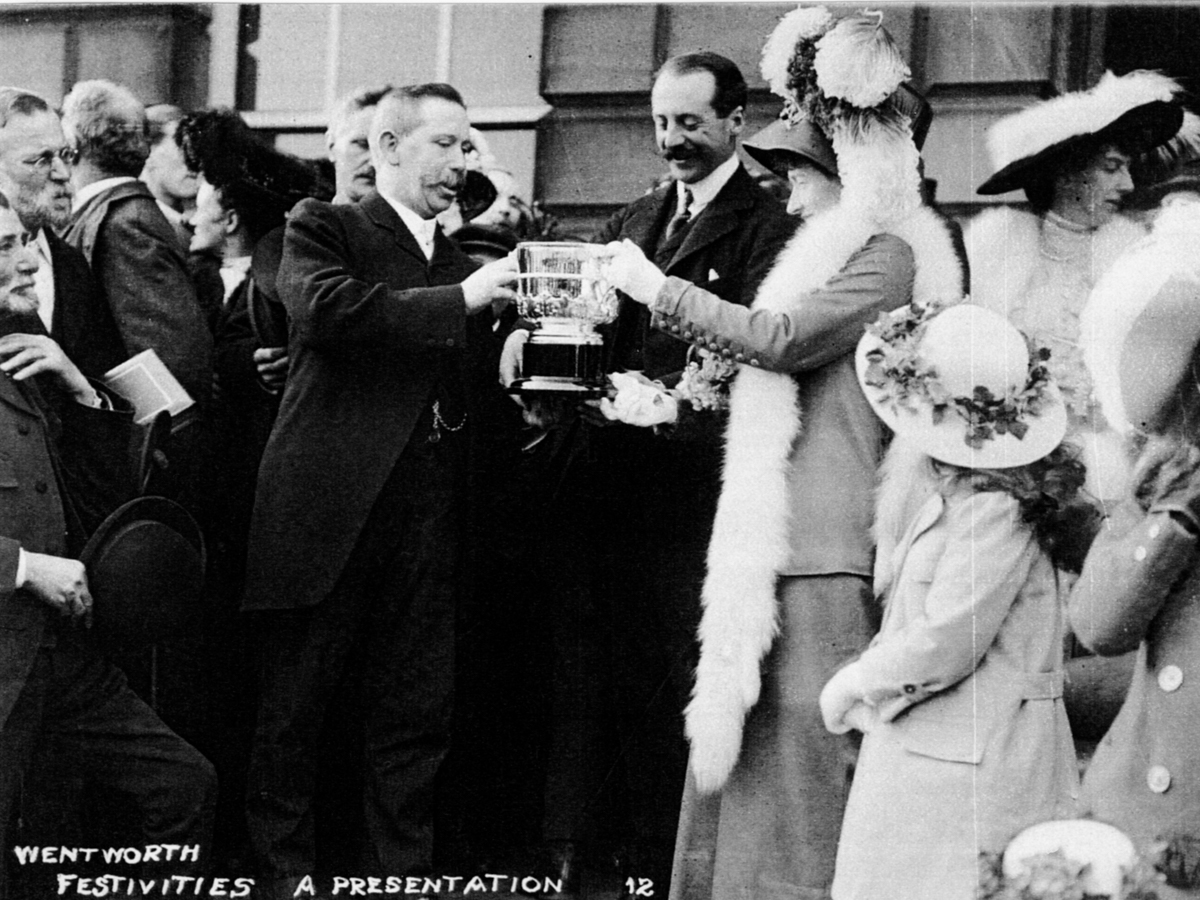 The photograph shown here, shows a representative of the miners employed by the Earl, presenting a silver christening bowl to the Earl and Countess. Other photographs by Scrivens, show a nurse showing off the baby to photographers, other cups and bowls being presented to the Earl and Countess, the roasting of an ox for sandwiches and the firework display that accompanied the christening.

The christening was more like a coronation than a christening. This was because the 7th Earl and Countess had had four daughters and it was feared that the Earldom would go to another branch of the family. The relative who would inherit if there was no son was an uncle who was 70 years old. Peter became 8th Earl in 1943 but was killed in an aircraft accident in 1948.

The christening ceremony took place in the private chapel in the mansion at one o’clock on 12th February, 1911. And the Rotherham Advertiser reported that the scarf presented to the Earl’s ancestor at the Battle of Hastings for his ‘valour and service’ would be wrapped around the baby Peter. 7,000 invitations were sent out to official guests and in addition it was reported that between 50,000 and 100,000 of the general public would also attend. This was because the Earl was not only an important landlord but a very significant employer, and his influence, directly and indirectly on people’s lives for many miles around was immense.

One hundred men from London were sent to erect marquees for thousands of the official guests and 300 waiters were sent by the caterers, Lyons, to Wentworth from London by special train. Local tenants, the employees of the hunts that the Earl hunted with, the parishioners of Wentworth and local miners all presented engraved bowls. To coincide with the birth of a male heir, Whitworth, Son and Nephew of Wath upon Dearne made a special brew of ale that was delivered to be stored in the vaults at Wentworth Woodhouse.

In the afternoon and evening there was a full round of festivities including bands, roundabouts, daylight fireworks and the roasting of an ox to provide beef sandwiches for the public. The event ended with a magnificent firework display, that started at a quarter to six when it was quite dark. It was reputed to be the biggest private firework display for five years. It included portraits of the Earl and Countess, Niagara Falls and a British battleship attacking and sinking the ‘dreadnought’ of a continental power.

The second photograph shows Peter, aged not yet three in May 1913. He is standing at the back of the wheelbarrow before the start of the wheelbarrow race at what was called the Territorial Sports Day. Guess who won?
There is an interesting story connected with one of the annual sports days at Wentworth Woodhouse. It is said that Lady Mabel, the 7th Earl’s sister, as a young teenager, was a very good sprinter and she had only one other close rival.

One year she turned up to the sports day to find that her rival was not there. On enquiring about where she was, she was told that the girl had reached the age of 13, had left school and had to leave the area to work in service as a domestic servant. This had a profound effect on Lady Mabel. She spent a large part of her adult life campaigning for better educational opportunities for young people, especially girls. She was a member of the West Riding Education Committee, was a member of the Labour Party, was instrumental in the founding Ecclesfield Grammar School and from 1949 to 1976 Wentworth Woodhouse was the home of the Label Mabel College, a physical education teachers’ training college.