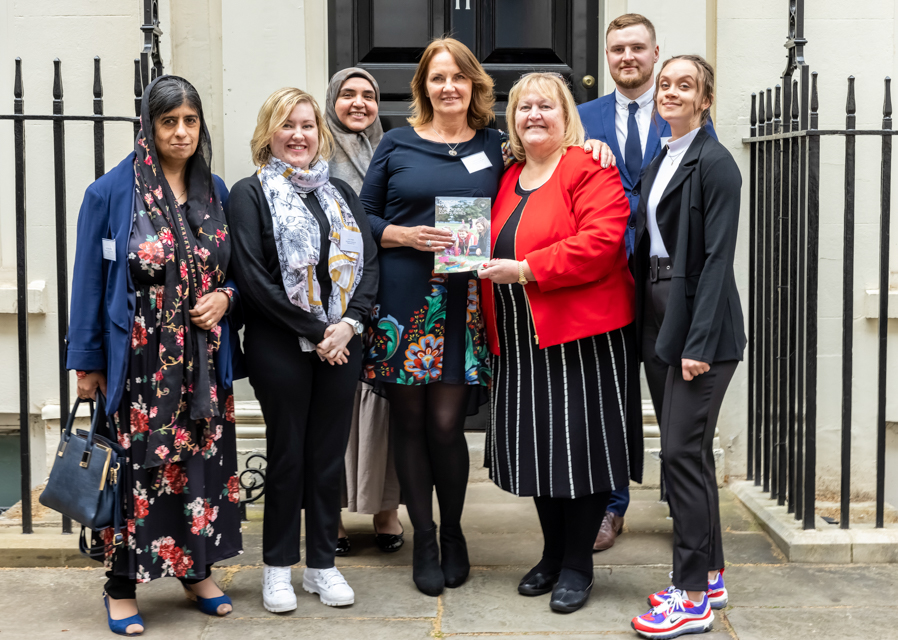 Improving lives, not just a house

Creating jobs and supporting communities – Wentworth Woodhouse Preservation Trust is continuing the legacy laid down by centuries of owners. It isn’t only about restoring an important piece of history…

A young apprentice, an Asian artist and a courageous employee living with a genetic condition headed to Downing Street in April to explain how the Trust regenerating Rotherham’s stately home, Wentworth Woodhouse, has changed their lives.
They were at a reception at No.11 to launch Changing Lives: Supporting Communities, a report on the economic and social impact being achieved alongside the resurrection of the Grade 1 listed mansion. Over 50 important guests heard how the Preservation Trust, which now owns the Georgian pile, is continuing the legacy of historic owners by giving opportunities to local people and boosting communities.

Lucy Nadin, of Thorpe Hesley, spoke of how Charcot Marie Tooth Disease affects the nerves which control her muscles and is now damaging her eyesight. Lucy thought it would be difficult to find an understanding employer but, after being taken on by the Trust at the age of 21 in 2019, she feels like a valued member of ‘an extended family.’
“I’m treated like a human being, not a victim of my condition. I love working at a place that I adore, with people I adore,” Lucy told guests.

Others speaking at Downing Street were Ben Halifax, age 21, of, Heritage Masonry Contracts, who began his stonemasonry apprenticeship during repairs to the mansion’s roofs, and Dominika Rojewska of ArtWorks South Yorkshire, whose artists with learning disabilities and autism are making an impact at the 83-acre site. Zanib Rasool MBE, of The Zanib Collective, explained how the house had opened its chapel to their art installation telling the stories of Pakistani women who came to South Yorkshire to join husbands and fathers working in the steel industry.

The Trust bought the house in 2017 for £7 million after a five-year campaign led by Rotherham businesswoman Dame Julie Kenny, and embarked on a programme of mixed-use regeneration which will take up to two decades to deliver and will cost over £130 million.

CEO Sarah McLeod said: “For centuries the house played a major role in the local economy. In the late 1900s it supported thousands of workers and generated the equivalent of £17 million-a-year in today’s money.

“Our report demonstrates how, in addition to saving the house, we are continuing that legacy. From March 2017 to March 2021, we outperformed the South Yorkshire Region in social and economic impact by 35% – we created 57 jobs, attracted 71,000 visitors and added £13.5million to the South Yorkshire economy. In that period, 95% of our £7.9 million capital spend went to local companies.

“But the report also features 12 people and organisations whose lives have been touched by the Trust and it’s their stories which really explain what we stand for – inclusivity, opportunities, encouraging creativity and raising aspirations.”
The event was held at Downing Street to commemorate the Government’s support. In the Autumn Statement of 2016, the Chancellor at that time, Philip Hammond, awarded a £7.6 million grant for critical roof repairs and in the Autumn Statement 2021 a £4.6 million Levelling Up grant was awarded, as part of a Rotherham Bid for the Leisure and Hospitality Sector.