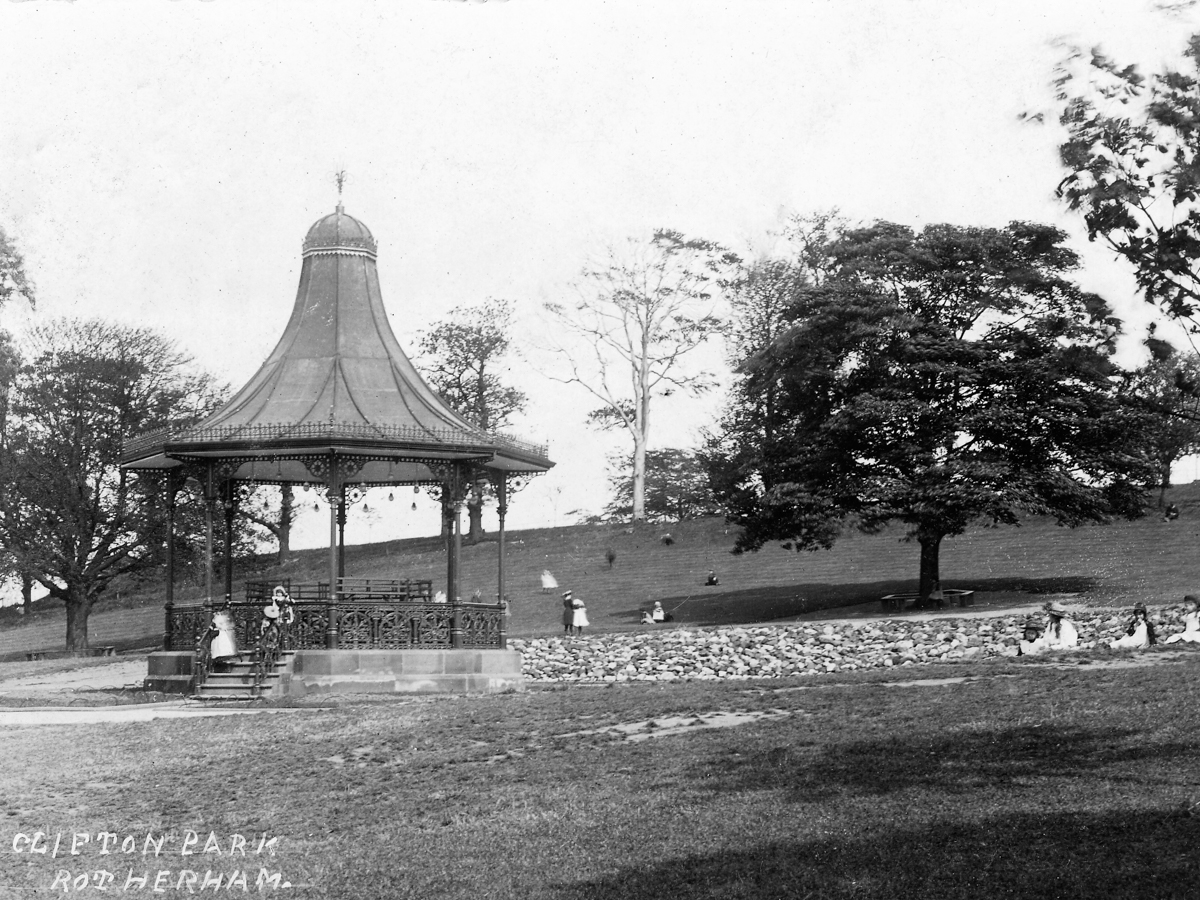 Clifton Park and its grand opening

The area now occupied by Clifton Park and Museum was purchased by the industrialist Joshua Walker in the 1780s, for the building of his new home and pleasure grounds. Joshua and his wife Susannah have their initials over the back door of Clifton House. It is thought that John Carr, the York architect, designed Clifton House.

The estate covered nearly seventy acres and consisted of a house, stables, outbuildings, a vinery, hot houses, a dovecote, fishpond, wells and an icehouse.

When Joshua Walker died in 1815, the estate passed to his elder son, Henry Frederick Walker and when he died in 1860 the entire estate was put up for sale. When the reserve price was not reached, the estate was divided up into nine smaller lots. The largest part including the house, outbuildings, gardens, fishpond and lodge was sold to William Owen, another local industrialist, in 1864. William Owen died in 1883 and his wife, Catherine, the following year. Rotherham Corporation bought the house and fifty-four acres of parkland for £25,000 in 1891, ‘for the use of the townspeople in perpetuity’, thus providing the local growing population with a much needed breathing space. Clifton Park was opened on 25 June 1891 — and what an occasion!

The park was officially opened by the Prince and Princess of Wales (later King Edward VII and Queen Alexandra), accompanied by the Princesses Maud and Victoria. The royal party stayed the previous night at Wentworth Woodhouse with the Earl and Countess Fitzwilliam who were also special guests at the ceremony. Also present for the opening ceremony were Rotherham’s Mayor and his wife (Alderman and Mrs Neill), Councillor W. B. Hirst (Chairman of the Parks Committee) and the Town Clerk, Mr H. H. Hickmott. This was the first occasion at which the Mayor wore his newly acquired robes of office, cocked hat and mayoral chain (made by local jeweller, John Mason). The Mayor obviously made a great impression as ‘driving ahead of the royal carriage he was loudly cheered’ and on stepping from his carriage, ten thousand children, on specially erected stands, obviously thought he was the Prince of Wales, and began to sing their well-rehearsed song, God Bless the Prince of Wales to ‘considerable merriment’!

Clifton Park was duly declared open by the Prince of Wales who was then presented with a silver gilt casket specially designed by Alderman Mason. The royals and officials then went to Clifton House for lunch.
During the afternoon there were many festivities for the crowds to enjoy — ‘bands, coconut shies, dancing and a parachute jump.’ The main attraction however was a balloon ascent by Captain Whelan of Huddersfield. At the beginning of the ascent there was a near calamity when a local councillor got his legs entangled with the ropes and was almost carried aloft hanging upside down by his legs! Fortunately he managed to free himself before the balloon ‘sped on its journey skywards’. The balloon later landed safely on the moors nine miles from Huddersfield. The evening festivities were in the form of a grand firework display which included a portrait of the Mayor and Mayoress, a naval battle and the Borough arms.

The Rotherham Advertiser described the new park as ‘beautifully wooded with trees of a rare type and others of majestic appearance’. The article went on to explain how Mr Albiston, the curator of Boston Park, was to create a number of flower beds ‘in elegant designs’ on the lawns to the east of Clifton House, which became a museum in 1893. A grotto is also described ‘intended to represent a miniature cave’ in which ‘stalactites hang from the roof’ and where the interior is ‘studded with coral, fossils, shells, petrifications and various other interesting geological specimens’. The original cast iron park bandstand was removed to Ferham Park in 1919 and a First World War tank then occupied the site until 1927. A new bandstand was erected in 1928 that was refurbished in 1991 as part of the centenary celebrations of the opening of the park.