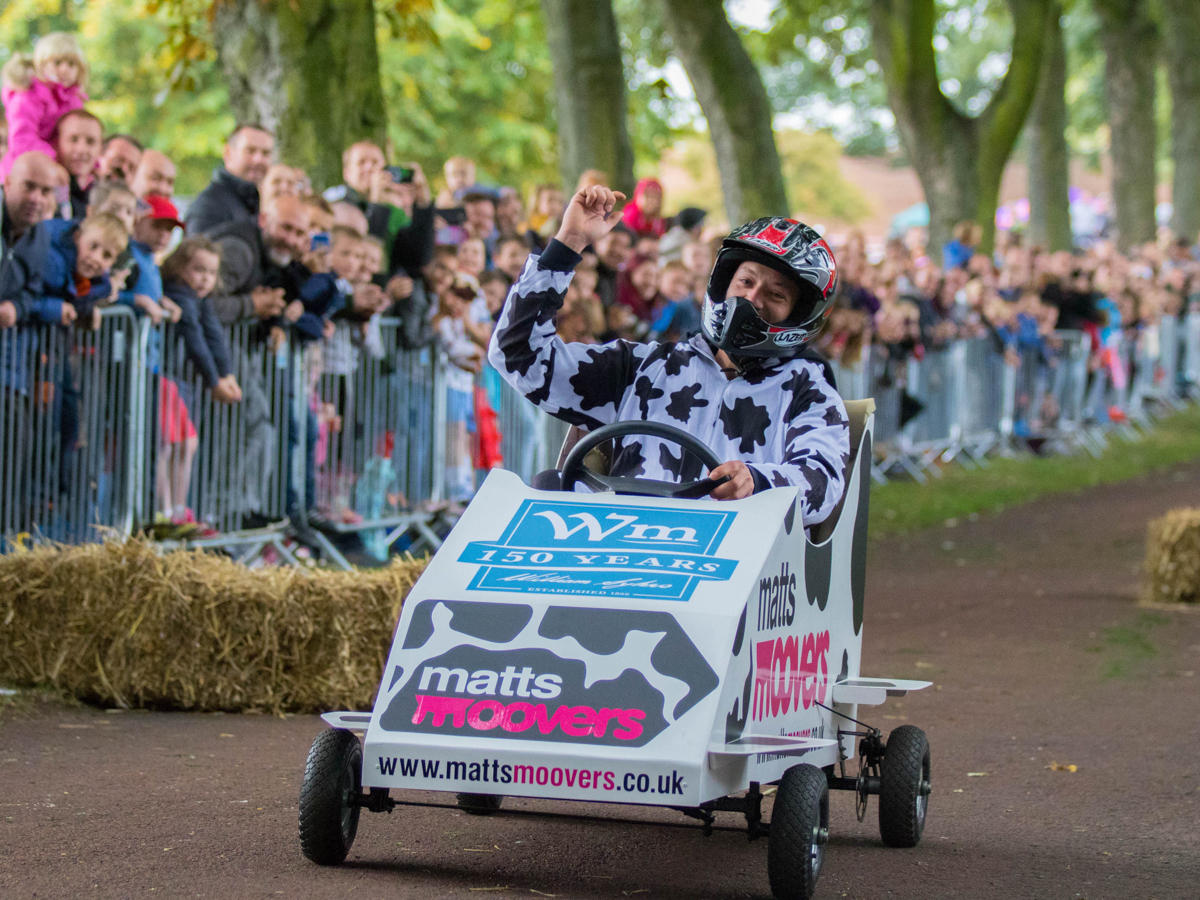 Get set for the wackiest of races as Clifton Park is transformed into a wheely fun race-track on Saturday 18th May.
Bluebell Wood Children’s Hospice’s award-winning Soapbox Derby is back. Thousands of spectators are expected to flock to the park to watch the action as 40 weird and wonderful hand-made go-karts career down a crazy 400-metre downhill course peppered with obstacles.

Daredevil drivers of all ages will be foot to the pedal as they tackle the bumps, jumps and chicanes.
Most teams are busy building their vehicles, which organisers stipulate must be as safe as they are fast and fun. But the event is already a huge success — all 40 race places were snapped up within weeks.

The first event in 2016 raised over £17,000, drew over 3,500 spectators and engaged nearly a quarter of a million people on Facebook and won a prestigious national award to boot. No other children’s hospice had staged such an event, and Bluebell Wood scooped the Best Use of Events trophy at the National Fundraising Awards.
Hospice Head of Fundraising Helen Mower said: “We’re hoping to top that attendance this year and are wheely looking forward to seeing all the wacky creations on the track.

“Our outdoor events are great ways for people to get together and put the fun into fundraising, all to help families facing the toughest of times across South Yorkshire, North Nottinghamshire, North Derbyshire and North Lincolnshire.”

Prizes will be awarded for the most creative cart and the fastest times, with the overall winner walking off with the title of Soapbox Champions 2019.

All are welcome to the event on Saturday 18th May, from 11.00am to 3.00pm. To find out about other Bluebell Wood events, visit www.bluebellwood.org or download Bluebell Wood’s free Events App.

May the force be with Team Kart Wars
Lifelong Star Wars fan Mark Dimond hopes the force will be with his crew when they compete in Bluebell Wood’s Soapbox Derby. Though he doubts their hand-made version of Luke Skywalker’s Landspeeder will be breaking any speed records.

“Managing to complete the course in less than 12 Parsecs would be nice, but our kart is all about style over substance,” says the Whiston dad of one.

The computer game designer made his mini craft for Bluebell Wood’s annual charity race back in 2017 from a children’s go-kart, picked up on eBay, and lashings of cardboard and papier mache. His four-strong team, nicknamed Kart Wars: A New Soap, rolled in 20th from a field of 40, but loved every minute.

When Mark learned the event was on again this year, the kart was brought out of mothballs and he enlisted Wakefield workmate Phil Banks and two friends from Whiston, IT consultant Lee Nickson and mortgage advisor Jonathan Swift.

“Bluebell Wood is an amazing place which provided care for the daughter of neighbours. It’s great to be able to contribute in some way. The last Soapbox Derby was such a brilliant day, we decided to go for it again,” he said.
For 2019, the Landspeeder is getting a new look — or two. Mark is hoping to create a different outer shell for the kart, which can be switched for each run, and he’s taking his turn at the wheel for the first time… By forgoing his authentic Stormtrooper suit!